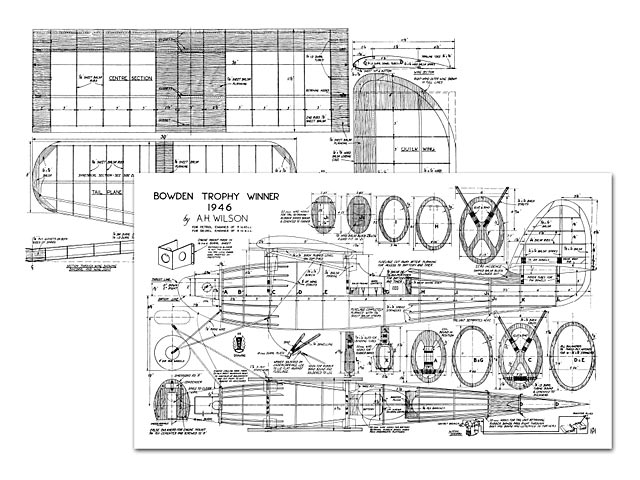 Quote: "THE high-wing monoplane which won the Bowden International Trophy this year demonstrated its reliability by subsequently winning the Bournemouth Reliability Contest; placing second in the Frost Trophy; and also placing second in the Eaton Bray Rally. Consistency of this nature is no fluke and indicates sound fundamental design. The model can therefore be recommended to those requiring a model of unquestionable reliability.

Construction. The fuselage is constructed from oval formers cut from 1/8 in birch three-ply notched for 16 spruce stringers 1/8 in square. The tail extremity of the fuselage is built in unit construction with the tailplane and detachable. It is held in position on the fuselage by two sets of rubber bands on each side and correctly located by a rectangular ply spigot engaging the similar rectangular aperture in the terminal former of the fuselage proper.

As it is not possible to use a central rod for building up the fuselage, some form of cradle is required to ensure accuracy of the finished structure. This may take the form of a series of blocks of equal height (approximately 5 in) attached to a suitable baseboard and arranged between the formers to support the centre stringers while one half of the fuselage is completely stringered. The fuselage can then be removed and the remaining stringers fitted.

An alternative method is to make a cradle from a piece of wood about 1/2 in thick and 3 in deep, slotted at the correct intervals to accept the formers, which should be a fairly tight fit in the slots. The slots must, of course, be cut to the correct depth to give the accurate fuselage contour. When all formers are accurately located on the cradle the stringers can be applied as far round the fuselage as possible; it is then removed and completed.

The fuselage frame is now completely planked with 1/16 in sheet-balsa strips..."

Quote: "Hi Steve, 1946 Bowden Trophy Winner - A.H.Wilson, 78in wingspan FF power model from Model Aircraft January 1947. No pictures with the article, the photo is from the contest report in the Sept 1946 issue." 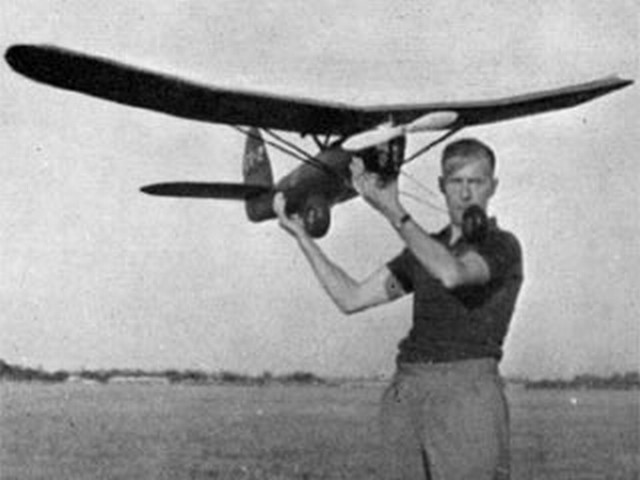