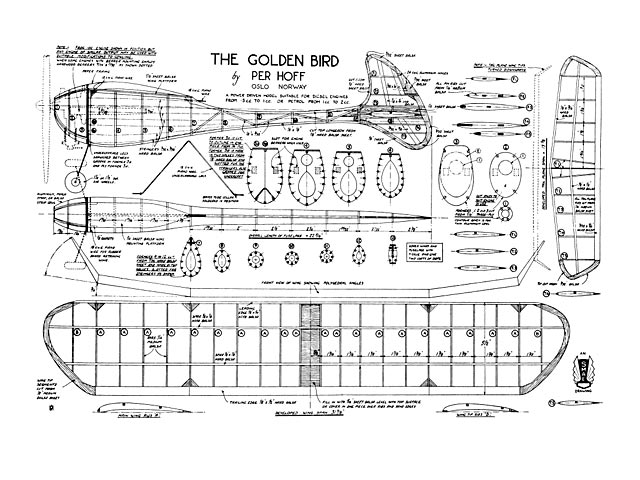 Quote: "A power driven model suitable for diesel engines from .5cc to 1cc or petrol from 1.5cc to 2cc... CUT out the top and bottom members of the fuselage and locate them in position on the plan with pins. Cut out the pieces for the fin outline and cement them together on the plan, using pieces of waxed paper under the joints to prevent the finished fin from adhering to the plan. Do not fit the ribs or struts yet.

Cut out the tailplane supporting panel from 1/16 balsa sheet, and cement it in position. Cut out the fuselage formers 3e, 4, 5, 6, 7, 8, 9, 10, 11, 12, 13 (two halves each, taking care to see that the engine bearer slots are in the right place to suit the engine you are using, and cement the left-hand halves to the fuselage members on the plan. Fit the diagonal struts in the rear fuselage panels.

When the half fuselage is thoroughly dry remove it carefully from the plan and cement the right-hand halves of the formers in place. Finish the fin by fitting the ribs and struts in place, and cementing them in position.

The engine bearers should he made from hardwood, such as birch, ash or hickory, and cemented in place on formers 3, 4 and 5. When you have fitted the engine bearers in place you can make the undercarriage struts from 3/64 in dia (18 swg) piano wire.

The upper ends of the struts are located in slots cut out of former 3c and cemented in position. Former 3b is then cut in one piece from plywood and cemented to the face of former 3c, so as to sandwich the undercarriage legs between them.

The fuselage is now built up with 3/32 square balsa stringers which streamline into the rear portion of the fuselage, and the top plate forming the wing platform is fitted. The anchorage pegs for the wing retaining rubber bands are made from 18 swg piano wire, firmly cemented in position.

Cover with tissue and give two coats of dope.

The tailplane is of straightforward construction and built up in one unit. When completed it is cemented in place in the aperture cut for it in the central supporting panel. When the cement is thoroughly dry the tailplane should be well faired into the fuselage with balsa fairings so as to give a smooth junction between the tailplane and the fuselage.

The Main Plane: Cut out the ribs from 1/16 balsa sheet and the wing tip sweeps from 1/8 sheet balsa. Cement the components together on the plan and finally build up on a dihedral board or, if you prefer, build it up completely on the dihedral board. Sand carefully.

Fill in or cover the centre portion with 1/16 balsa sheet to take the pressure of the retaining rubber bands and cover with tissue, giving it two coats of dope. Cut out the cowling formers 1, 2 and 3a from 1/16 sheet balsa and build it up on the upper and lower members cut from 1/8 sheet. The cowling may be completed by any desired method, such as planking with 1/16 sheet balsa, beating it out from sheet aluminium, or by building it up from strips of paper on a suitable former well waxed to prevent adhesion.

The cowling is held in place by small pieces of thin piano wire and is suitably cut out to accommodate the engine of your choice, including apertures for the intake exhaust controls and cooling air.

The original model is powered by a compression-ignition engine and weighs 6-3/8 oz in flying trim.

There is nothing out of the ordinary concerning its trimming, but the centre of gravity should be at 1/3 of the chord from the leading edge of the wing. Properly trimmed, it has a very steep climb with a flat glide." 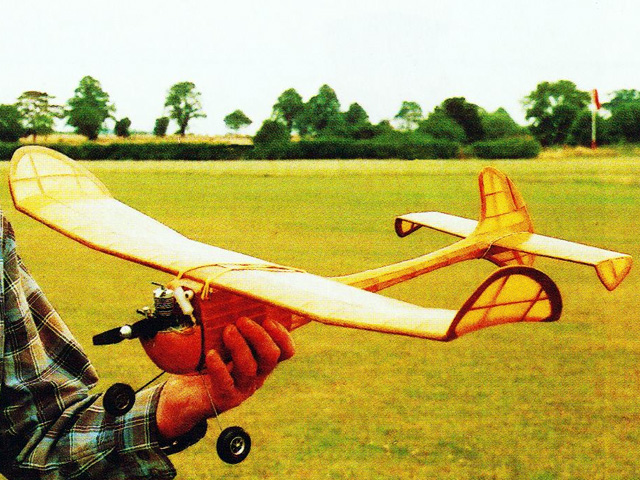