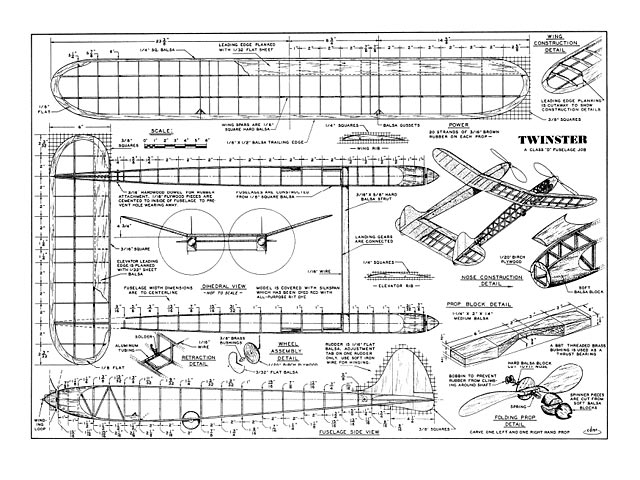 Quote: "A thermal hunting rubber powered job for summer flying. Although it may seem so at first glance, you are not seeing double. Originally plotted as a scheme to pack more power into a rubber job for a skyrocket climb to thermal-grabbing heights, the 'Twinster' has proved to have several other advantages as well. Not the least of these is the pleasure of having a ship that is really different and strictly not run-of-the-mill.

The prototype of this plane, a 350 sq incher, was built back in pre-war days and was just beginning to show its potentials when, at a big contest of all places, one of the motors was inadvertently wound backward, producing an inglorious belly flopper and a bashed-in nose on one of the fuselages. Our vacation with Uncle Sam intervened before further work could be done with it and by the time the author got back to the workshop, the time and tide of several years had taken its toll. So when the rubber with a real snap became available again, it was decided to build a new version.

One item of interest is the high power resulting from the twin construction. The splitting of the mnotor into two units permits a greater motor run duration, due to the increased number of winds. For a desired amount of power output, a slower prop speed is provided in comparision with a single-prop job.

With the opposite rotaing props, you can pack in all the power that you can summon the courage and muscle to windf and need have no worries about that ol' debbil torque. And if you are inclined to zippy climb, the Twinster gives out in a manner calculated to make the most zoom-happy P-38 pilot jealous.

The plane is of conventional contest-type construction, throughout. It was planned to be rugged and has proven to be so. Consequently, it is a bit over the minimum required weight for a ship of this size..." 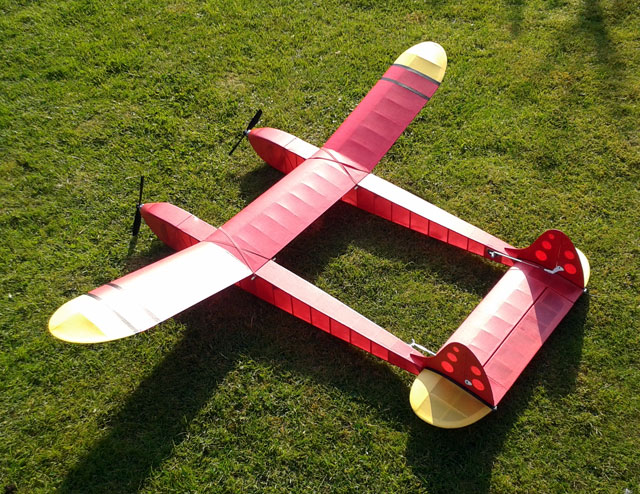