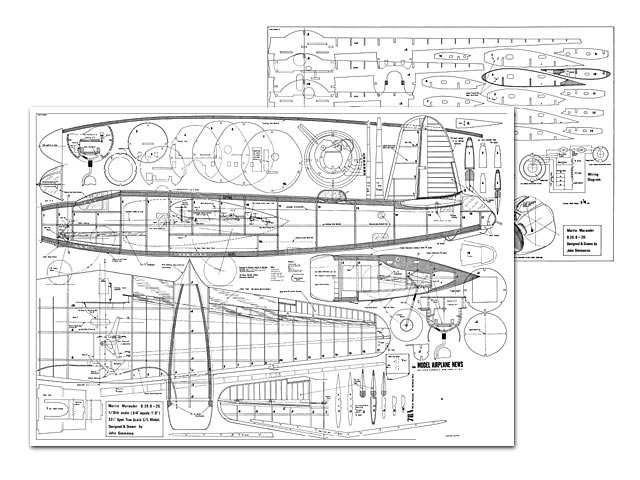 All scale modelers carry around in their heads a list of aircraft they would like one day to build. This model has shortened my own list by one! It has also just about halved the list of effort I must expend as, all the design work - including a couple of quickies in between as light relief - took three years from con-ception to the test flights. which were at last year's Nats, the day before the con-test!

The Marauder not only gave me a very attractive aircraft model - one that had been clamoring to be built for a long time - it enabled me to satisfy an ambition. I had been primarily a F/F Scale addict in the past, with four Nationals wins in this class, and the lure of R/C Scale coupled with the usual lack of modeling time made it clear that before very long - assuming that in the end I finally get the hang of R/C Multi flying - I should have to limit myself to R/C models. Once having done this, I felt I would never really be able to get back to C/L models, so the Marauder was mostly a case of now or never. I had never won C/L-Scale at the Nats, but now that this model has done that for me I feel I can concentrate on R/C Scale with a clear conscience.

Incidentally, for the benefit of those radio fliers who look down their noses at C/L jobs and mutter 'bricks on string' and similar imprecations, I can assure them that though it is limited to circular flight, piloting a C/L model is probably closer to full-size flying than any other form of model control. It is certainly the only one where you can feel a model's flight reaction - feel it approaching the stall as you come in to land. Add to this a scale twinengined bomber and you have a formula for excitement that is hard to equal.

Competition fliers will be interested in the following details.My model, with operating throttles, undercarriage, flaps, lights and brakes, complete with batteries but without fuel weighs 8-1/4 lb, which is well within both AMA and FAI weight limits. The wing loading is approximately 125 gr/dm2 which is under the FAI rules..." 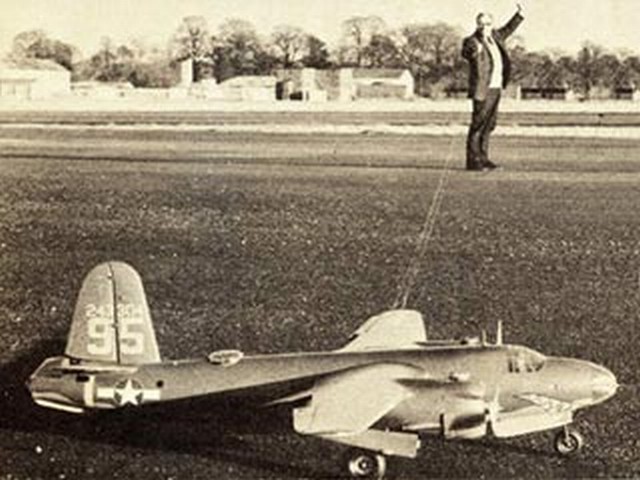 Colour photo of his completed Martin Marauder model made from this plan [see more pics 006] is from Matt Halton's great build thread at http://www.rcgroups.com/forums/showthread.php?t=1012084 with electric power and RC.
SteveWMD - 30/09/2013
Add a comment