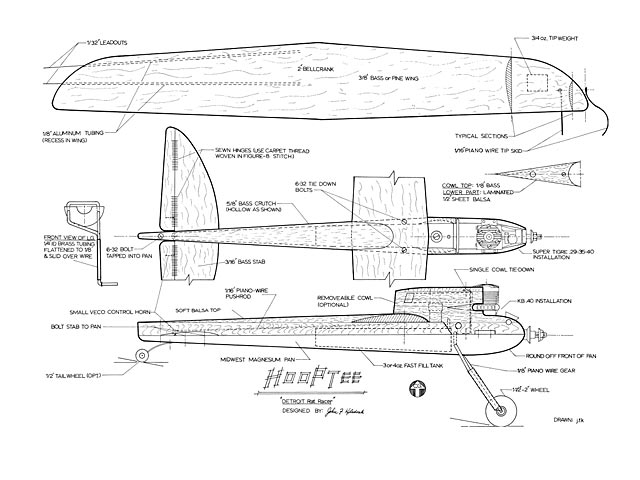 Quote: "Ever wonder how it would feel to wind up a winner in these incredible rat race marathons? Weir, stop wondering and build this outstanding rat and join the winner's circle. Hooptee, by John Kilsdonk.

During a break in activities at the 1966 Nationals, I was chatting with Dick Norsikian (of BNST) from Los Angeles. He said that he could tell where a person lived just by looking at his rat racer. How true this is - is probably one of the most peculiar things of rat racing, comletely different airplanes and systems, depending on the locale. In general, whether it be the light wing-loaded inverted engine jobs of the West, the sidewinder profile jobs of the Southwest, the FAI Team Race style of the East, the twin boom sidewinders of the Northeast and Canada, or the higher wing-loaded upright engined full length pan jobs of the Midwest, or the many variations in between - all seem to work with equal success towards the same common goal.

Hooptee is typically midwestern and has had above average success both in Midwestern meets, King Orange and at the two Nats that have held rat races. It should be made clear that Hooptee is not claimed to be the ultimate in designs, however; through many many contests (22 in 1966) it has proven a very consistent performer. lt doesn't win every time. because there's a lot more to rat racing than having a good airplane - a dependable and rugged performer is a must for the long contest grind each year.

Hooptee will fill this requisite without a doubt. Rat races are won on dependability and lots of hard work at the practice circle. A note here: nothing should be done at the sacrifice of reliability. Remember over 50% of the race is won on pit slops. Air speed is only a slight factor in determining the winner. Hooptee's clean simple lines wilt tel your engine do its stuff - the rest is up to those in the pit.

Just a few notes on construction, as the plans are pretty self-explanatory; 1) The flat bottom lifting stabilizer is one of Hooptee's latest refinements, it is a trick I picked up from the local speed boys. It makes flying in the wind much easier, since a minimum of corrective elevator trim is necessary from one side of the circle to the other...." 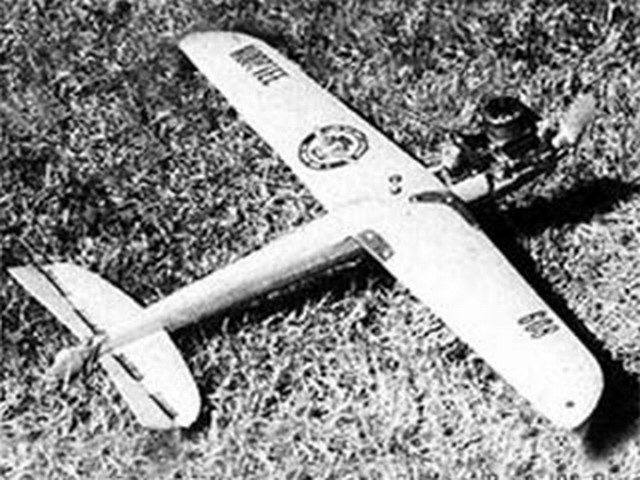