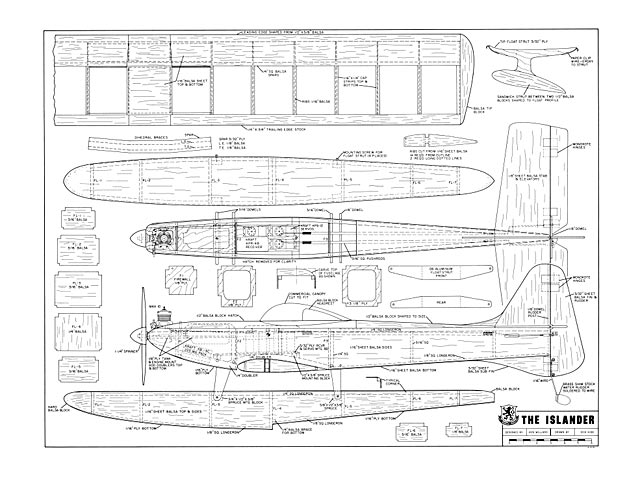 Quote: "In they May issue of RCM I introduced you to the concept of the Islander - a single float seaplane with wing tip floats - as something you could do with any more or less conventional low wing design, so long as the float was big enough to support the model and also had enough up-sweep aft of the step to permit proper rotation for water takeoffs.

So here are the plans and a few construction hints. First, though, let me warn you that this model is definitely not the beginner's cup of tea when it comes to flying, even though it is quite easy to build. With that big rudder and those large elevators, it's very responsive, and even though it doesn't have ailerons, it's very easy to fly inverted. It also spins and nap rolls readily, and recovers just as fast.

It's a real pleasure to maneuver on the water. The little water rudder may look look small, but if it were any bigger it would be almost too effective at high taxi speeds.

Finally, I have not shown the conventional tail-dragger landing gear in the plans, since all you have to do is unstrap the float and strap on a Hallco lighweight landing gear, and make a tail wheel to mount in place of the water rudder. If you do want to utilize the landplane version, put the gear on backwards so it slants aft. Since it is mounted forward of the wing, you want to gel the wheels as far back as possible to reduce the ground looping tendencies which are accentuated with a forward placed gear.

As you can readily see from the plans, the wing is of standard rib and spar construction. In fact, you probably could replace the wing with one of Midwest's foam wings, although Ive never tried it. If you do, I'd suggest the addition of a sharp leading edge spoiler for about five inches out on each panel from the center section to reduce the tendency for tip stalls on landing.

The float is nothing more than a streamlined box, with a nose block and tail block added. By rounding the corners on the top, around the 1/4 in stringers, you can soften the squarish look but keep the corners sharp on the bottom, for good planing action..." 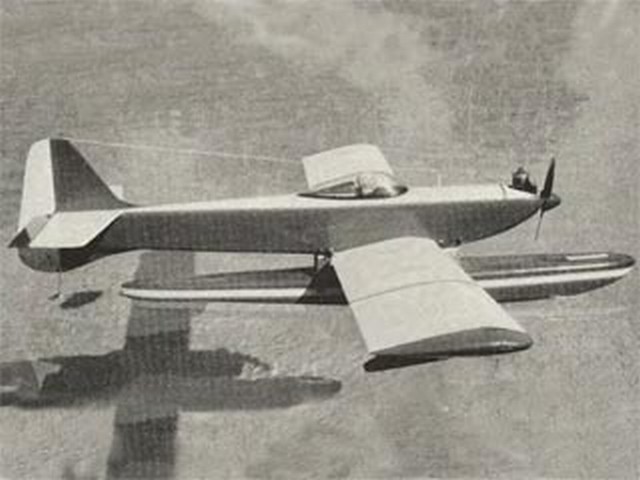