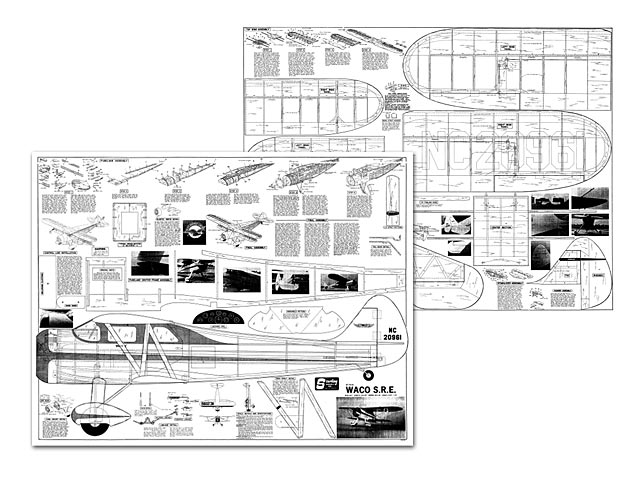 Quote: "An FM Product Review: Sterling Models Waco SRE. A stand-off scale kit from one of the most well-known manufacturers around. An impressive ship. By Dave Meier.

Certainly the most prolific manufacturer of aircraft in the 1930's, in terms of numbers of different models produced, was the Waco Aircraft Company of Troy, Ohio. From 1925 until 1942, when the govern-ment required the company to build troop gliders, Waco built a reputation for solid de-pendable aircraft, nearly 300 examples of which are still flying today; a marvellous testimony to engineering excellence.

The pride of the fleet, and to our eyes, the prettiest cabin biplane ever built was the 'E'. Three models of this series were offered, differing in engine installation: the ARE (300 hp Jacobs), the HRE (300 hp Lycoming), and the SRE (450 hp Pratt & Whitney). A pilot and four passengers were carried at speeds and ranges comparing to light twins built today. With the P&W Wasp Jr, the SRE cruised at 195 mph at 4000 lbs gross for 1000 miles. Production ended in 1942 after some 30 examples had been built. About 6 remain active today.

The kit, as received, is most complete: lots of wood; die cut sheet and strip balsa, die cut ply, formed wire landing gear, a neat vacuum formed cowl with engine detail, that, when painted and dressed up with dummy pushrods, looks much better than when you're just flying it around your shop making engine noises and dreaming of the first flight. Fact is, it's a good idea that more manufacturers ought to look into for stand-off scale ships. The engine detail considerably strengthens a plastic cowl and, from 10 feet away, looks just great. So don't be tempted to cut it all away and leave an ugly, gaping hole for the judges to ignore because they can't see the details in flight.

The plans also include numerous black and white photos of the full size ship and a small three-view with specifications of the real plane.

Let's get to building. We started with the wings. Both are three-piece assemblies; center section and two outer panels. Both are of straight-forward construction and one shouldn't experience much difficulty, except that the installation of the tips is a bit confusing. Work carefully here, dry fit them, both to the leading edges and the wing framework before gluing, and you'll see how best to install them.

Speaking of the leading edges, they are of a formed diamond shape that Sterling has used on several designs. Make sure to enlarge the rib notches to accept them before gluing up the wing framework. It's a tough job to do later. Also, be sure the spars fit the notches, especially the laminated assemblies, so that you can thread the outer panels onto the center sections when it's time for that step. Note that the 3/16 square spar extensions on the lower wing center section are really only to locate the proper dihedral angle and are not structural. If you plan to fly without the struts, you will probably experience the same problems that a pilot of the full-size Waco would have if he tried to fly without them. You can probably get away with it though, if you fiberglass the joints of the outer panels and center sections.

Ailerons are on the upper wing only. These are semi-shaped solid balsa and about 10 minutes work with razor plane and sandpaper will have them ready for hingeing. They look small you say? They are. Important! Substitute Williams Bros 60 degree bellcranks for the ones supplied and install them so as to get as much up aileron and as little down as possible. If you don't use differential ailerons you'll have to be especially good at making co-ordinated turns because of the opposite yaw effect caused by the drag of the down aileron..."

Quote: "There is a note with corrections of the building instructions [see addendum file] which I would like to join to the plan. Furthermore I would advise to use another way to fasten the struts on the wings. The struts build as mentioned on the plan are not flexible enough to go on the hooks. I had to modify in a less conventional way." 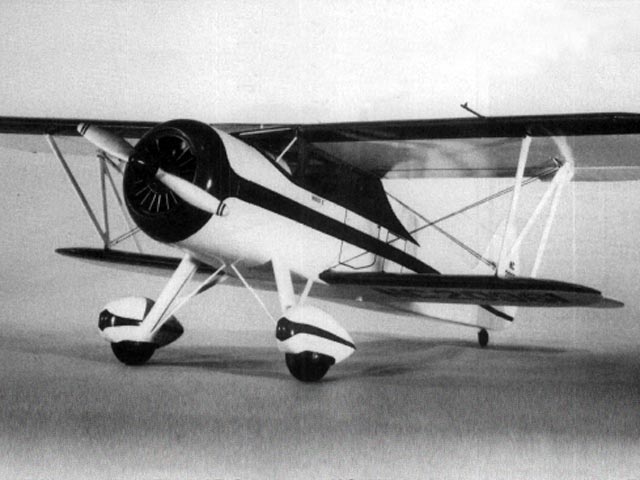