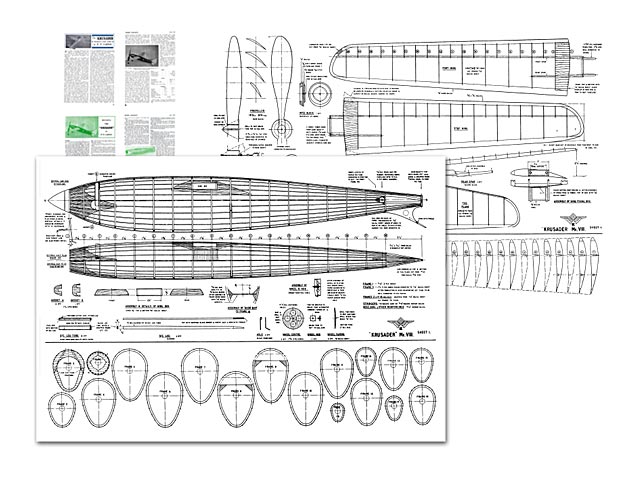 Quote: "AS a result of watching Chasteneuf's and Bullock's 'Streamliners' doing their stuff in the 1938 Wakefield trials, I resolved to have an up-to-date model in the 1939 trials; and thus the 'Krusader' was conceived.

Before actually laying out the design, all available photographs and 'dope' (now known as 'gen') was obtained on the current streamliners and on the advice of our local dealer, a copy of Frank Zaic's yearbook found a place under the bed pillow every night. As a result of all this collection of data, it was decided that our super job should have a pear-shaped fuselage with gull shoulder wings and a lifting tail giving a CG position near the trailing edge instead of the more usual 1/3 chord CG position. The fuselage shape was chosen because of its sleek appearance, the advantage of having the maximum width at the point of wing attach-ment, and the fact that no one else appeared to be using this section shape. The gull wings were chosen for prettiness, and the trailing edge CG position because, in our ignorance, we considered it a 'good thing'.

Round about the time of the completion of the first model, Bob Copland joined our club, and so was on hand in Bushy Park on the first trials - which proved not too successful. On Bob's advice lead was added to the nose-block to give the more usual 1/3 chord CG, and small 'wash out' tabs added to the wing tips. The tail was set to zero degrees and in this form we got the prototype ambling around - as the model weighed round about 12 oz, it it was taken home for further thought and development. The Mk II version was the same model, but having a complete new tail unit and a more solid propeller in place of the lead ballast to correct trim. The gull wings, with Eiffel 400 section remained, as did the full Clark Y tail section at zero incidence. In this form it did, as resolved in 1938, appear in the 1939 Wakefield trials, but beyond making a perfect take-off, only distinguished itself by spinning in and smashing a wing.

The next development was 'straight' wings of RAF 32 section, and higher aspect ratio (span now 49 in, against previous gull span of 44 in). Again the tail assembly was modified, with thinner Clark Y section, and in this form the Mk III began to show promise. The Mk IV was again the same model, but with a series of laminated balsa ring formers in place of the previous three-ply balsa formers, as a result of these modifications a fair weight saving was effected, again the model responded to alterations by consistent flights of a minute and over. However, to enable the model to take part in a Red Cross Exhibition, it was 'painted and powered' for show purposes. On the outbreak of war it was packed and stored in the roof and not assembled again until the 1946 Northern Heights Gala, when it was entered in, and won, a Concours prize. This success was followed at the ABA Gala Day, when it also took the Prix d'Elegance, next it appeared at The Model Engineer Exhibition, and took a first silver medal in the Wakefield class. Having decided that it has earned its keep, this old timer, still going strong after eight years, has now been retired.

A second model, known as the Mk V, had been partly completed by the outbreak of war, and before taking leave of Hawkers and Langley aerodrome, it was decided to give it a few trials before stowing it with the Mk IV in the roof. Constructionally the model was the same as the IV, but had rib and a half spacing instead of the full ribs, at one inch spacings. The weight of this model, with 3 oz of rubber, was 8-1/4 oz, and consistent flights of 24 min duration could be obtained. One has fond memories of climbing all over the roofs of the big hangars in company with poor Seth Smith, the test pilot, trying to find into which roof bay it had landed..."

Quote: "Hi Steve. A classic Wakefield for you. Krusader Mk8 – Peter Capon, 49in span FF rubber. This Mark 8 version published in Model Aircraft March 1947, with build instructions the following month. Not a project for the faint hearted! Regards," 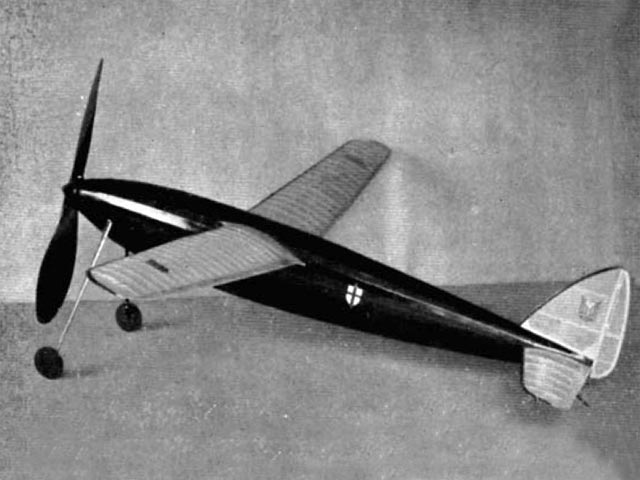