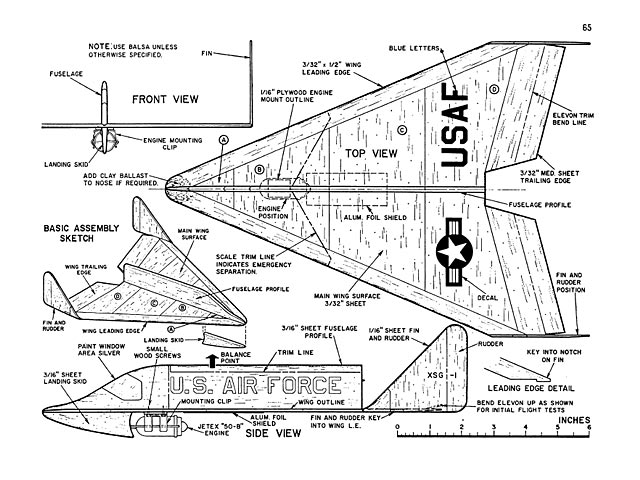 Quote: "Your 'Dyna-Soar' is a beautifully designed, workable model which is a cinch to build. It is powered by the easy-to-use Jetex '50B' motor and will zoom aloft just like the real thing, and come down to safe landings.

"THE DYNA-SOAR, - General Thomas D White, United States Air Force Chief of Staff, said recently - is the first vehicle which will combine the advantages of manned aircraft and missiles into a single system. It is interesting to note that although the Dyna-Soar will attain peak speeds of over 15,000 miles an hour during flight, its proposed landing speed is to be less than that of some of our present-day combat aircraft.

Titan II with its 400,000 pounds of thrust will lift Dyna-Soar into very high sub-orbital flights, from which it will make a scorching re-entry into the earth's atmosphere, then land like a conventional airplane on an airlield of the pilot's choosing.

Boeing, the company that builds the famed 707 Jetliner and the 8-52 Bomber, is the system contractor for Dyna-Soar. Working under the direction of the Air Force's Wright Air Development Division, Boeing will tie-in the vehicle sub-system, integrate vehicle and booster, and perform the assembly and test. Design is manned by the USAF Air Research and Development Command and the Air Material Command.

By combining the high speed and extreme altitude of his craft with his ability to maneuver, the pilot can select any airfield in a range as big as the distance between Alaska and the southern tip of California with equal ease. Dyne-Soar can be sent up again after landing, even though its heat-resistant surface might look like a well-used cooking range.

Later, when the great Saturn booster, with its million-and-at-half pounds of thrust, becomes available for Dyna-Soar launching, the tiny craft will be able to zoom up to speeds that will carry it around the earth. In the long range thinking of its designers, advanced models might permit flights around the moon, bringing the pilot back with reentry through the earth's atmosphere and a landing at an airfield.

From a modeling point of view, Dyna-Soar is beautifully simple. Not only is a workable model a cinch to build but it has breath-taking preformance. Powered by the Jetex model 50B motor it zooms aloft just like the real thing, and comes down to safe landings, making possible flight after flight.

CONSTRUCTION: General Notes: With the exception of the landing skid, motor mount, and wing trailing edges, your Dyna-Soar can be assembled as a unit on the workbench, using pins to hold the work while the model cement dries. Do not dope or paint the model until it is completely assembled - this prevents warping. Make the wing first, then attach the profile body and the twin fins.

Wing: Butt join with cement the four inch sheet-balsa pieces A,B,C, and D. (Put wax paper beneath to prevent the cement sticking to the bench.) Make the pieces slightly oversize, then cut out the triangle by using a straight edge and a balsa knife or single-edge razor blade. After the edges are made straight, attach the x V2 inch leading edge pieces (note leading edge detail sketch for keying in the fins).

Though the model can be sand-papered when finished, you can lift the wing now. if you wish. in order to sand it gently with line sandpaper tacked to a flat block of wood. When sanded, put the wing down on the bench again and resume construction.

Body: Make this from 3/16 inch thick sheet balsa, cut 1-3/8 inch wide. (If you have trouble obtaining exact sizes, you can always cut the wood to the desired width from the appropriate thickness of material.) Sand the body smooth, then cement it on top of the wing.

Fins: Cut to shape from 3/32 inch medium sheet balsa. sand smooth, rounding the leading and rear edges slightly, then cement them in place. Use a draftsman's triangle or any right-angled object to check their alignment. Note that the rudder portion of the fins is sanded to a taper to reduce weight at the rear - important for balance. Score the left fin as shown ('bend line' on plan) so that the rudder can be offset later for controlling flight turn.

Wing Trailing Edges: Make in the same way as the fins, noting 'score' or 'bend' lines needed for adjusting the 'elevons' later on. Be sure to sand the wood to a taper upwards at the rear edge for lightness and easy bending. Remove the otherwise finished model from the bunch and cement the trailing edge pieces in position.

Cut out the landing skid, sand, and cement in place. Screw the Jetex mounting clip in the posi-tion shown on the plan. Make sure it is on straight, when viewed from the side, or from directly underneath. if crooked it will affect the flight pattern..." 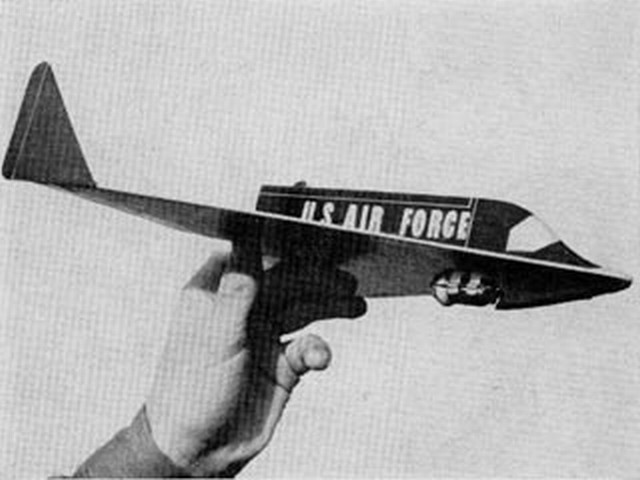