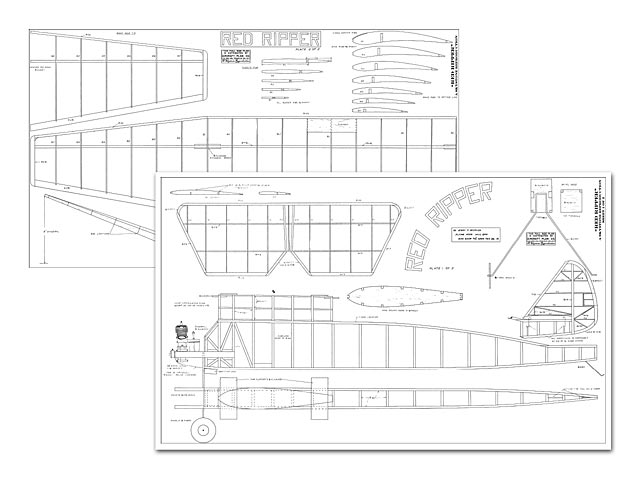 Quote: "Swift, easy to build, efficient - that's the Red Ripper! With more than 250 flights logged, this six-footer is outstanding for contest work. So if you balsa butchers have been seeking a tourney taker for Summer meets - here's just the craft to fill the bill! By Jerry T Peeples.

IN A RECENT contest held by the Cleveland Gas Model Guild, the Red Ripper turned in an official out-of-sight flight of 11 min 15 sec, with a 17 sec motor run after hooking onto a thermal and reaching 2,000 ft. The model is very rugged and is designed to take it. It has a slow, flat glide, a long moment arm, and very stable surfaces.

Most any 1/5 hp engine may be used by merely altering the hole spacing or the thickness of the mounts. The original craft was powered with a Brown model D. The ribs for the wing, stabilizer, and rudder are 1/2 size and may be scaled up to full-size by using a graph of 1/4 in squares. Other units are 1/3 full scale. Medium hard balsa is used throughout except where specified.

FUSELAGE AND WING MOUNT: Careful selection of about seven pieces of hard 1/4 in square strips of balsa is the first step in constructing the fuselage. These strips. are used for the two body sizes - the main longerons and cross-braces.

After laying out the first side, with a piece of wax paper over the plans to provide a working surface, glue the motor mounts in place at the front of the fuselage. Small tacks or pins are used to hold the sides firmly in place. After one side has dried thoroughly and the 1/4 in cross-braces have been cemented in place, the other side is made.

When the two sides of the fuselage have been completed, join them at the tail post with an ample amount of cement. When this joint has set, glue the cross-braces in place. These braces, incidentally, are 2 in long back to the ninth bulkhead, and the remainder are fashioned as noted on the plans.

After the cement on the fuselage frame has set thoroughly, glue the firewall in place on the front of the body. Drill a hole in the top of the front bulkhead for the high tension wire, and fashion two more in the bottom for the ground and breaker points wires. For the assembly of the motor, the holes may be drilled for the required spacing.

The mounts are made from 3/8 by 3/4 by 7 in basswood. The landing gear is of 1/8 piano wire and is attached to the lower section of the firewall with the aid of .025 thick tin brackets bolted through the firewall.

In constructing the pylon-type wing mount, first take three pieces of 1/8 flat hard balsa, 2-1/2 by 13-3/4 in, and construct a streamlined shape template of cardboard. By scaling up the drawing to actual size with the use of 1/4 in graph paper, the necessary shape can be obtained. On the template, space the notches as on the plans for the 1/4 in cross-braces.

When the notches have been spaced properly, take the cross-braces, which are all 3 inches in length - spacing the three sections as shown in the perspective drawing - and cement them in the notches. When thoroughly dry, cut a 1/8 dowel into 2 in pieces and cement in their proper locations so that rubber may be wrapped around them on either end to hold the wing on top of the mount.

The next step is to form the wing supports, which hold the wing on the pylon mount. These supports are made to the size stated from 1/8 plywood, then cemented to the top of the mount as indicated. This type support assures a non-fluttering wing.

After the mount is completed, cement to the top of the fuselage at the exact location shown, thus establishing a perfect center of gravity and proper balance.

The engine may be bolted in next, and before the covering of the fuselage is finished the wiring must be completed.

The battery box makes for an exceedingly simple process of changing penlites. The box consists of a regular Austin Penlite container bolted to a plywood flooring in the front of the fuselage. The wires are run to the outside through 1/16 in hole drilled in the motor mounts, then soldered to the positive and negative terminals of the battery container..." 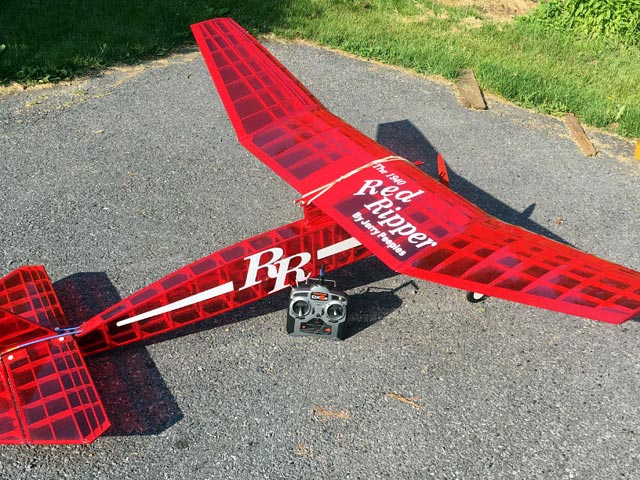