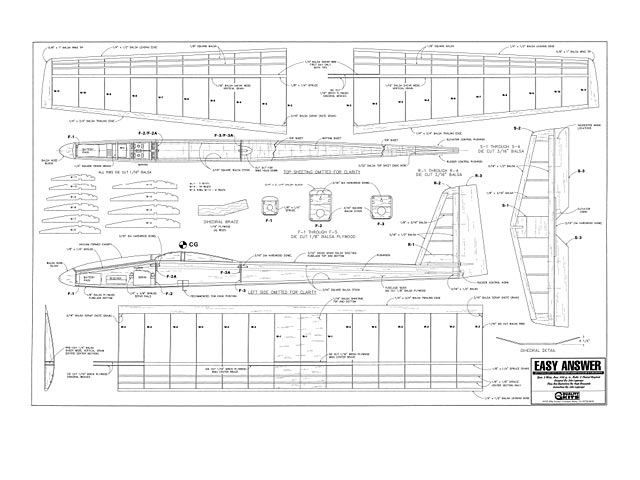 Quote: "Found these squirreled away... they were part of the 50 or so plans that I rescued from the LHS dumpster last year..."

Quote: "Products in use: The Easy Answer, by Larry Enger.

A brand-new entry into the two-meter sailplane market, the Easy Answer is tough enough to stand up to a beginner’s abuse, yet is capable of delivering surprisingly good performance.

The Easy Answer is an economically priced two-meter sailplane for thermal or slope soaring. The box label says: Easy to build, easy to fly, yet capable of winning your share of club contests. After building and flying our review aircraft, we feel this is a fairly accurate description of the model. It's simple enough that beginners aren't likely to be stymied during construction, and strong enough that they're unlikely to do irreparable damage to it while learning to launch, soar and land. Yet, in more experienced hands it has the performance needed for competing against more expensive sailplanes in the two-meter class.

The constant chord center panel of the three-panel wing has full-width balsa shear webs, staggered plywood doublers in the center, and 1/8 x 1/4 spruce I-beam spar caps. This changes to a spruce C-beam spar with 1/16 balsa shear webs for the outer panels. Plywood joiners tie the three panels together. Within common sense limitations, a properly built Easy Answer wing will readily allow launching from any modern 12-volt winch without much fear of the wingtips clapping together halfway up the line.

The wing ribs were cleanly die-cut and punched out nicely. The ribs feature unique U-shaped turbulator spar notches. These notches punch out very cleanly and totally eliminate the typical loss of rib material between the notches and with it the curved airfoil shape. This is quite common with many square-cut notched ribs.

When assembling the wing, the directions tell you to glue in the shear webs last, after you have assembled the LE, TE and top and bottom spar caps. In our opinion, it's far simpler and better to start from the center and work toward the tips by gluing in rib-web-rib-web, etc, over the bottom spar cap, followed by the top cap. This assures perfectly vertical rib alignment, a tight, gap-free shear web line, and better (wetter) glue joints.

There can be no doubt that the Easy Answer has the strongest wood fuselage on the market. At 8.5 ounces, it's also possibly the heaviest! It features one-piece sides and a fore-bottom all made of 1/8-inch three ply balsa plywood. a very tough material. This fuselage is quite capable of surviving the 'ground pounding' that beginners will likely dish out.

Our kit contained a balsa block to be carved into the canopy. We used a power belt sander to rough out the canopy shape. We understand that future kit runs will include clear molded plastic canopies with plywood trays. If you dislike carving and sanding, this will be a welcome change.

The Easy Answer's nose is 9 inches long (including the nose block), and as a result, a foam-wrapped receiver, plus foamwrapped battery pack, plus two servos (as shown on the plans) is a very tight fit. We decided to place the receiver under the wing LE, as this entire area is empty. The new plastic canopy should allow the receiver to be positioned vertically behind the battery pack, which may solve the space problem.

The Easy Answers stabs are a combination of interlocking die-cut balsa pieces and sticks. Just the right amount of stick material is supplied, so be sure to carefully cut the longer pieces first, then progressively cut the smaller ones to avoid running short of material.

The only nit-pick we found here was the wider-than-necessary rudder cutout on the elevator, which forced the pushrod to make a somewhat tight bend to get to the control horn. It works, but it could be a narrower V-shaped gap and work better. It’s easy to fix this yourself if you desire.

The finished flying weight of our model was 33 ounces. This works out to a wing loading of 8.4 ounces per square foot. Most two-meter models these days fall between 6 and 9 ounces per square foot. To be honest, we were glad not to have to add any ballast on the two windy days (4-8 mph) that we flew, and happy to find out that we could out-climb a pair of high-tech unlimited competition ships on one occasion!

FLYING: As its name would suggest, the Easy Answer is easy to fly. MB Soaring columnist Bill Forrey and his nine-year-old son Matt were given maiden test flight honors. Matt had less than five minutes of stick time in his life prior to flying the Easy Answer. Yet with only verbal coaching and an occasional grab of the control stick by his dad, he managed two flights of between 2-1/2 and 3 minutes, one flight of over 8 minutes, and a fourth flight of 28 minutes, 25 seconds. This last flight was cut short only because of a pair of stiff necks! Three of the four flights he launched and landed [with a little hikingl all by himself!

Built straight, the Easy Answer winch launches straight up the line with no tendency to veer off to either side. The towhook location and CG location produce a steep but safe climb to a nice launch height. The model covers ground faster than a typical two-meter floater due to its higher wing loading and aspect ratio. lt also appears to have a flatter L/D than most floaters. This means that cruising over to the pre-spotted lift or finding your own thermal is more productive. Once in lift, this little bird signals its newfound climb rate very well.

The Easy Answer's three-piece wing has just the right amount of dihedral. To maintain a turn, slight intermittent rudder pressure with slight up elevator trim is necessary to keep the model from straightening out and to keep the circle flat. This indicates good spiral stability for training and for finesse thermalling. A beginner's confidence level will climb rapidly with the Easy Answer. Our nine-year-old test pilot was performing loops (intentionally!) on his third flight without warning his instructors of the impending maneuvers!

With the CG at the rear edge of the spar (the plans show it at the center of the spar), dive recovery is rather quick and resulted in some porpoising. Future flights will be made with less lead in the nose to smooth this out. Pitch stability is very good.

CONCLUSION: The Easy Answer lives up to its claims of being a trainer capable of good performance. lt builds as easily as any other two-meter on the market, yet is much stronger. lt thermals and maneuvers well and is stable enough to use as a trainer. Considering that most hobby shops will sell it for around $25 - $30, when it comes down to choice, the Easy Answer is just that!" 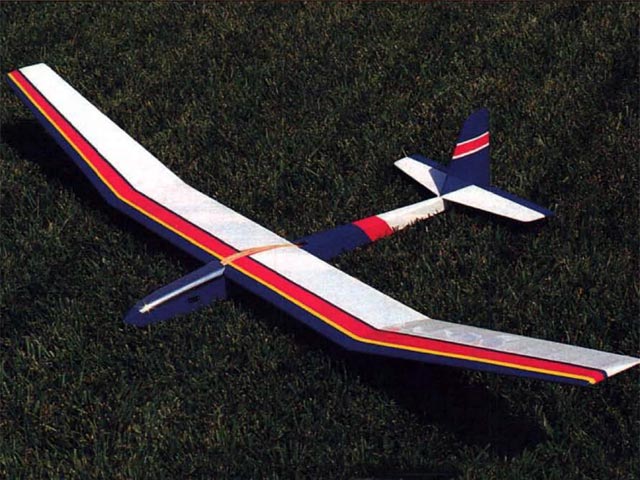 Cannot wait to see what else has come out of that LHS Dumpster!
Marty - 25/09/2013
Hi Steve- Browsing through recent comments I saw Marty say can't wait to see what else comes out of that dumpster. Well that got my attention instantly. The plan was the 'Easy Answer' by John Lupperger and credit given to Old Pilot for submitting it. Then it says :(formers incomplete. Well I scrutinized the plan to see what was missing. First if incomplete is referring to W-1,since it is not labled and up with other rib patterns, it is sitting atop the airplane in the side view. Just remember to trim it short for sheeting(as is shown). Second, above the dihedral brace, plan says "W-4: 14 req'd". Please don't pick up that knife just yet and start producing ribs without cross referencing the total plan. The plan should say W-2 : 14 req'd. If something really is missing maybe you can let me know and I will try to find my plan and remedy it... Thanks for all your work, (My dad got me scratch building in the early 70's),
Dunyet - 29/09/2013
Thanks, ok have now set this plan listed as 'complete'.
SteveWMD - 29/09/2013
The Easy Answer is extremely dear to me, it was the first RC aircraft I was given as a very young child - I spent a whole year building it by myself, all my previous experience was with models I made from junkyard foams and cardboard - it was the most amazing gifts I had ever gotten I was so proud of it. Sadly we never had access to a proper club and the best I could get was short hand launch flighs in the garden so it never flew the way it was designed to but it taught me the basics of RC, building with balsa (all those ribs!) and covering etc. I see classic gliders all the time on the web and at clubs but until now I never saw anything on the Easy Answer or any of the Global models which I think were really good models. Someone should revive the range and maybe sell ARF's like Goldberg did with the Gentla Lady
Darren - 08/03/2021
I modified mine by shoving a brushless motor up front,installing Graupner airbrakes and fixing the servos in the tail end.I fly it regularly here in England,and have found the airbrakes to be worth their weight in gold.
Graham - 24/03/2021
Add a comment