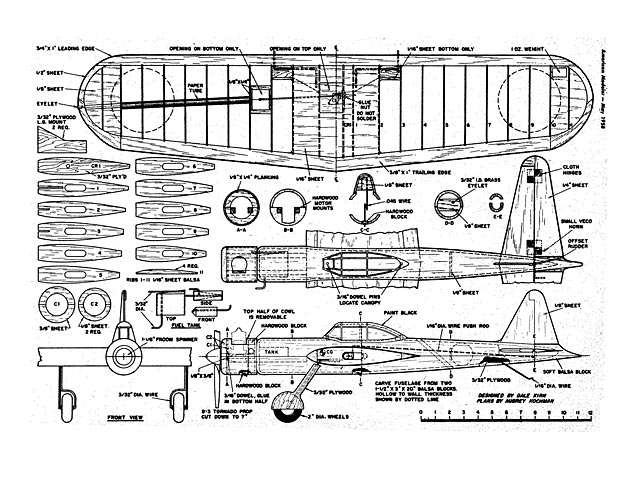 Quote: "At first glance you might think a plane this size would be powered by either a .19 or a .29 engine. But look again - that's only an .09! This ship was designed and built to demonstrate that Mono-Line controls do work in stunt and that less power is needed to keep the plane in the air. Many of you have seen this particular plane fly. By last year's Nationals it already had a hundred flights.

This is not a scale model but uses the general outlines of the famous Zero of World War II. I feel that a stunt job should at least resemble a full size aircraft; this one was designed with that in mind.

Zero-ette is a dream to fly. I enjoy demonstrating it more than a bigger ship. Mono-Line opens a new field in stunt, especially in the .049 to 15 engine range. Primarily, engines in this category have been used on free flight and radio control ships, not too much in control line. Now they are practical for line work if Mono-Line is used. Its hard to conceive just how much drag two lines actually produce. The speed increase on Mono-Line equipped stunt craft is very noticeable and they can be flown on longer lines than two wire ships. Also real smoothness in maneuvering is possible.

Construction was kept as simple and strong as possible. Careful selection of lightweight balsa is a must. If you are going to fly this plane on two tines, I suggest you use at least a .19 engine.

Build the wing first. Very little explanation is due here because of its simplicity. Attention should be given to the mounting of the control unit and the landing gear mounting plates, Control used is the 1/2A Stunt-Master unit; it must be disassembled to get into the wing. Dismount the unit and slide it into position on the mounting rib. Temporarily mount it before you make the inboard wing tip.

After the tip is glued on line up the stem of the control unit precisely with the eyelet in the wing tip. This alig-ment is very important. You will have to shave some on the angle blocks (furnished with control unit) before the unit will position correctly. The paper tube makes the flying tine hook up a simple matter. If you prefer, this tube can be made out of celluloid so it won't show through the wing. Be sure to glue the weight in the outboard wing tip..."

Quote: "Steve, For the person looking for the CL sport 'Zero-Ette'. It's scanned from a magazine, so sorry for the resolution, screen background... but in a pinch..."

Article pages, text and pic, thanks to pit. 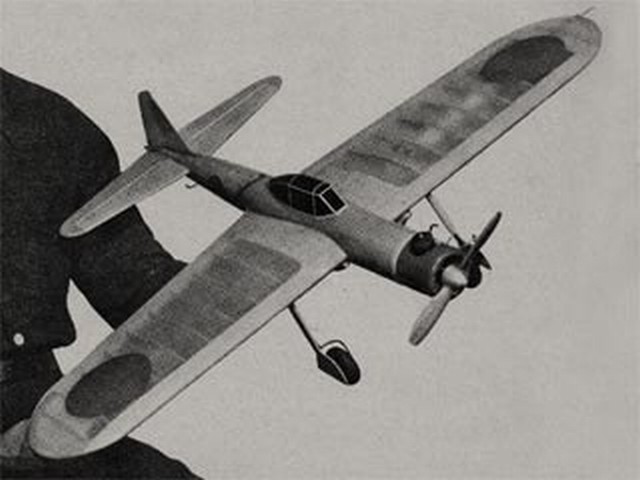