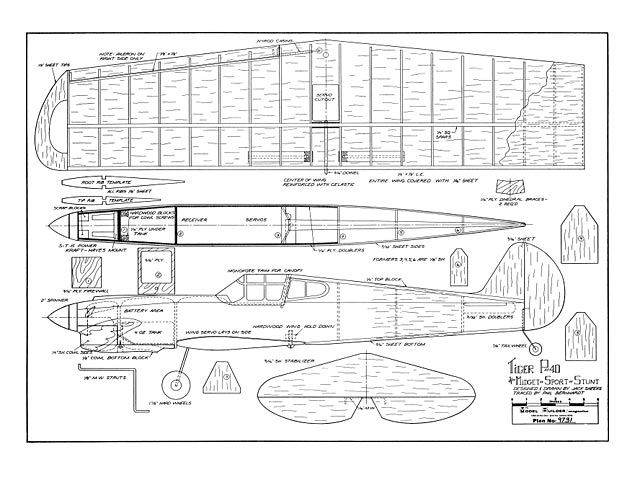 Quote: "P-40 Quarter Midget Racer, by Jack Sheeks. Quarter Midget racing is sweeping the country, and what's nice is that many of the winning planes are original designs. The P-40 has already shown great potential in several races.

Wish we could tell you that this little ship is the descendant of the great balsa God 'Speed' or that we have been working on the basic design for over 10 years to make it perfect. But we have done none of these things. We can say that it has proved to be a very good design that is stable in flight and is not too shaggy when it comes to speed. The P-40 took shape not long after my ME 109 proved to be such a good competitor. We decided to try and make the next ship even faster, with an enclosed cowling and modified rib pattern. The landing gear was placed further out in the wing in order to get better ground handling. This helps to get around the first pylon quicker. The straight leading edge of the wing helps the ship turn quicker after getting it in knife edge flight. With these modifications, the only ship both Hal Vandiver and myself liked, that would still be a military ship, was the P-40. So we built one to see if it would cut the mustard.

The little ship isn't doing too bad in competition. Hal has flown it in two different meets now and placed third in the Lafayette, Indiana 1/4 Midget races. He couldn't quite beat the K & B's with his Tigre. But third isn't too bad out of 35 entries. He then went to Rough River, Kentucky, for the 1st Mint Julip meet. By this time he had modified the ship and had a hot K & B 15 growling in the cowl. He was a lap ahead of most of his competition when she quit. He changed plugs, props, fuel filters and flew his second heat. Again on the eighth lap she quit, while leading the race. The culprit was in the tank. The clunk had slipped off and he was only drawing half the fuel from the tank. This has since been remedied.

Our P-40 weighs in at 2 lb, 9 oz with a Blue Max radio, Tigre 15 and MonoKote, so there shouldn't be any problem with weight. Midwest balsa was used throughout.

The only thing we have to say about getting more speed out of a ship is to be sure she is clean. By this we mean no rough areas on the fuse or flying sur-faces. This slows you down considerably. Use all the tricks you have seen other pylon racers use and give the P-40 a try. We think you will like it. It maneuvers very well also, and would make a good ship for sport flyers.

The construction of this ship is very simple. Begin with the wing ribs. Cut the templates out of thin aluminum and sandwich enough 1/8 inch balsa rib blanks between them for one wing half..." 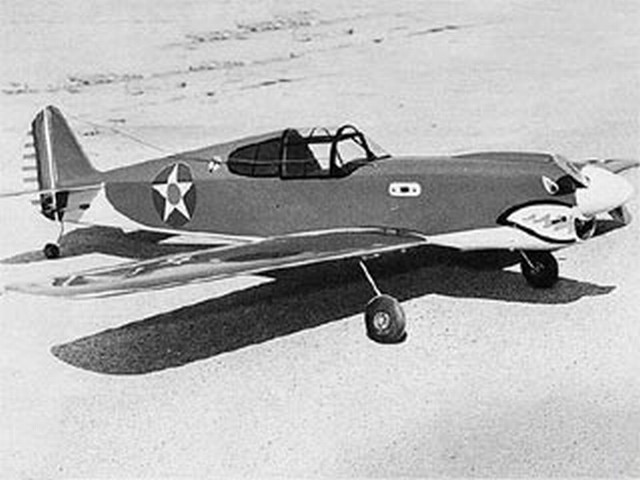