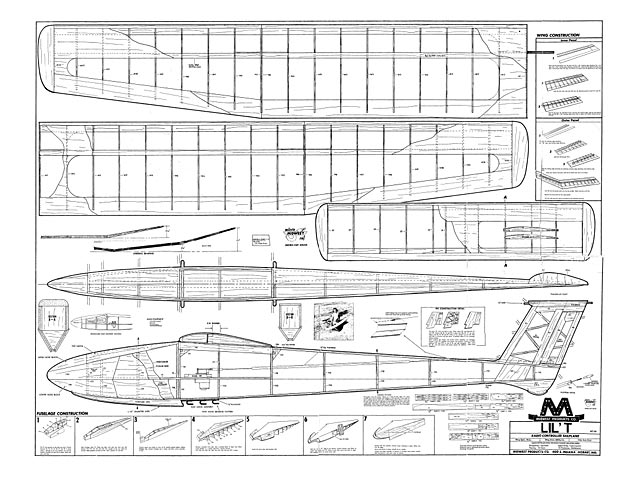 Lil'T. Slope glider for single channel RC. This is the plan from the long gone early 70s Midwest kit of the Lil'T. Kit no 121.

Note the Lil T (oz3749) first appeared in Aug 1965 Flying Models. This here is the Lil T as later kitted by Midwest.

Quote: "Found these squirreled away... they were part of the 50 or so plans that I rescued from the LHS dumpster last year..."

Kitted by the American Midwest company, and imported by World Engines Ltd, of Watford, the Li'l-T is a 74 in span single-channel RC sailplane with much to commend it, being equally at home slope soaring as it is thermal soaring from the flying field. With its one-piece polyhedral wing, T-tail (from which it takes its name) and generally 'traditional' configuration, it makes a pleasant change from the much more specialised models current in this country.

The kit is one of those that make one want to start building right away, the quality of the wood being that somehow really special Midwest standard and the die-cutting impeccable throughout the sheet stock. In fact, apart from leading edges, spars and noseblock, the model is virtually all formed from sheet. The single-sided plan is clearly printed - showing both wing halves - and gives the plan-view of the fuselage, a point often omitted these days. The model is shown with three-position tow-hooks for Hi-start or two-line launching, and (if you must!) details for a power pylon are included, but not the materials [see supplement file].

Construction of the main components is described with step-by-step illustrative panels, whilst there are also drawings showing the layout of the die-cut pieces in each sheet. (It is recommended that one should number each piece as annotated in these drawings, before commencing construction.) The model is well-suited to pulse-proportional control, and the actuator shown on the plan is the Rand HR-x, and the recommended alternative the World Engines 'Ghost.' Of course, there is no reason why other actuators should not be used, but some minor surgery is necessary to install Adams magnetic or Elmic type rubber-driven ones.

Complementing the instructions, there is a four-page leaflet of 'Tips on RC Flying,' by Dale Will-oughby, containing hints on test gliding, details of towing and Hi-start launching, plus some notes on elementary slope soaring; all good gen for the newcomer to the gentle art.

There is nothing unusual construction-wise about Li'l-T and everything went together satisfactorily with the usual implements, and I can see no reason why anyone with moderate experience should encounter difficulties, provided the instructions are followed implicitly. The Only small niggle I did have was that the tailplane ribs do not take into account the centre-section sheeting, and should, therefore, be reduced in depth by the appropriate amount before commencing assembly.

Should one wish to use a rubber-driven escapement, or an Adams magnetic actuator, it will be necessary to make cut-outs for torque-rod and/or rubber in the formers, and I would suggest that a couple of 1/8 in square strips of balsa be added to each former, for strength, before cutting them. The fin-root will also have to be modified to accommodate the torque-rod tube (I used a 5 in length of PTFE tube).

I covered the wings and tailplane with Solarfilm, and the fuselage with tissue doped on, plus a couple of coats of polyurethane paint. Finished weight, without radio gear, was 16-3/4 oz.

Flight testing Initial flights were made using an Adams double coil actuator which, after the eradication of some 27 MHz gremlins, proved quite adequate. Latterly, I fitted an elderly motorised selective actuator. Whilst both systems are quite satisfactory, my own preference for single channel work is a 'bang-bang' actuator.

On the review model, I found the need for extra ballast to attain the correct trim on hand launches, bringing the CG some 3/16 in forward of the specified location. A small point here - the ballast box is not over large, so I would suggest planting some of the initial ballast in the noseblock (ie build some in, before finishing) where, weight for weight, it will be more effective.

Flat field flying was carried out with the aid of a bungee Hi-start in light winds. I found the middle tow-hook most suitable, the model making height perfectly and needing little or no correction during the ascent - even when launched some 30 deg. off wind. The absence of 'risers' did not permit the appreciation of thermalling qualities, but it will suffice to say that Li'I-T compared very favourably with a variety of other types of model being flown at the same time.

Slope soaring with this model was without problems (once the gremlins in my home-made radio link were sorted out) and, again, performance was very good. With careful handling, it even held its own with a couple of Clous! This was in quite light wind conditions and, in fact, I feel these are the times when Li'l-T is at its best. With a breeze of anything more than about 12 mph, the flying speed needs to be increased (by addition of ballast at the CG position). With my 7 oz of radio gear, the flying weight is 2-3/4 oz, giving a wing-loading of 6.8 oz/sq ft which most people would consider a floater.

I think the Li'l-T has the qualities to give the tyro a successful introduction to RC gliding - slope soaring or flat-field flying alike - and will provide the builder with many enjoyable hours of serene single-surface enjoyment, especially on the days when more highly loaded slope models are waiting for a Force 5."

Update 18/4/2022: Added Power Pylon drawing with instructions, thanks to EugeneChernosky. 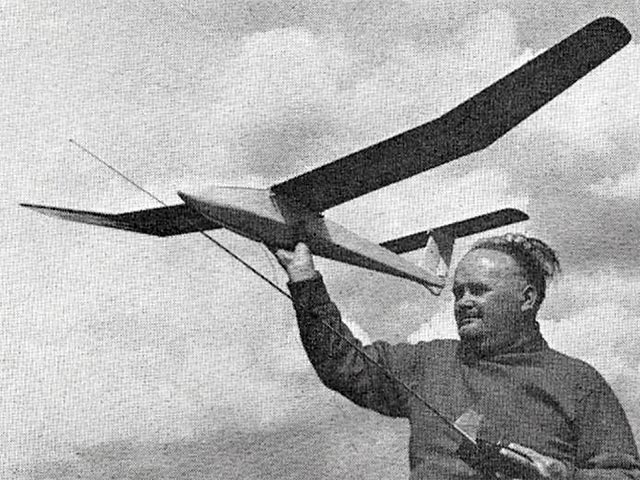 Hi Steve, On the Lil'T plan by Bob Hahn, it says formers incomplete. What is missing ? I went through the whole plane and it looks like everything is there to me. I counted all the numbered patterns and looks complete. Thanks,
Dunyet - 11/10/2013
Fair point - the plan does show a parts ID reference sheet, but the parts are not shown full-size, so I guess my thinking was that this is not a complete and full plan in the sense that you could immediately start tracing the formers and then cutting balsa. It will need some work first.
SteveWMD - 11/10/2013
Add a comment