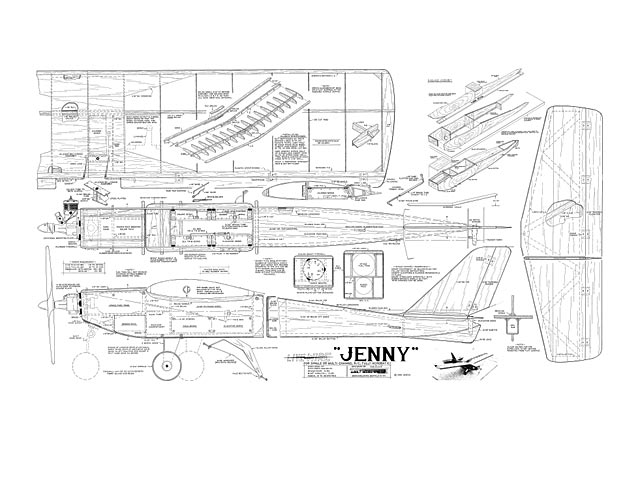 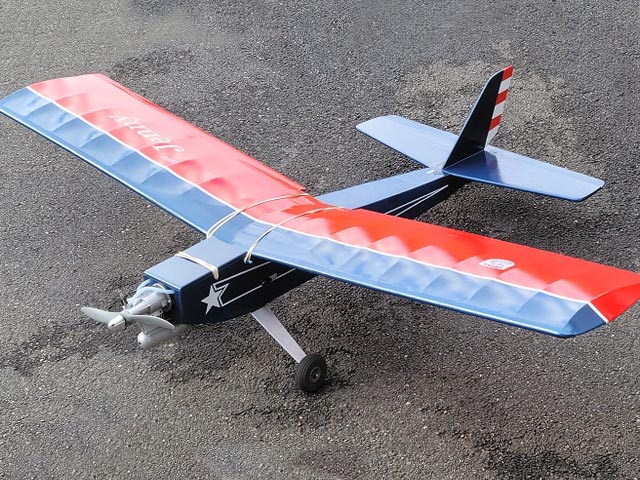 Few months ago I found deBolt Jenny on Ebay auction and I lost bid. I was so much regretted not bid high enough. I have specially memory with this airplane. This was the very first airplane my father built for me back in 1970’s. Even though my father did not know how to fly or R/C was not his hobby, he just built it for me only because I wanted flying airplane. Can you imagine how much effort he have to put to finish! Now my father is old and I want build it for him.. Thank you so much putting Jenny’s plan. God bless you...
kyehwan - 20/11/2013
I suspect this design was the inspiration for Phil Kraft's Ugly Stik, since it was available before the Stik and served the same purpose, a quickly built expendable airplane. At that time, the early sixties, most R/C models were complicated, heavy and not so easily built. The Jenny, with its pre-assembled plywood fuselage, could be built in a week if you weren't too picky about appearances. Powered by a cheap McCoy 35, it flew very well, unfortunately the kit wasn't anything to brag about, after all, it was a DeBolt kit. The Jensen kit for the Ugly Stik was miles ahead of the Jenny in quality and quickly took its rightful place as the most built R/C kit ever.
DougSmith - 22/06/2015
Back in 1977 or so I was a teenager and I found a Jenny at a swap meet. I built it and powered it with a K/B .35 and flew it four channels with an EK Logictrol radio at our field in Harrison New York. The only modification I made was I strengthened the wing with leading and trailing edge sheeting and cap strips. It flew very well. The only issue was the "Band" on landing gear. Anything but a perfect landing and the gear would come out from under it. It was rugged though and I don't remember it ever being damaged. I moved it up in power to a K/B .40 and it became a rocket. I ultimately replaced it with a Sig Kouger. Don't remember what happened to the Jenny. I think after a million or so flights it was sold off for someone else to enjoy.
Richard - 18/06/2020
Greetings, Attached are two photos [main pic, 004] of my just finished deBolt LiveWire Jenny (oz4842). OS 35 for power, 3 channel, fabric and dope finish. Cheers,
Scott Wallace - 30/04/2021
Add a comment