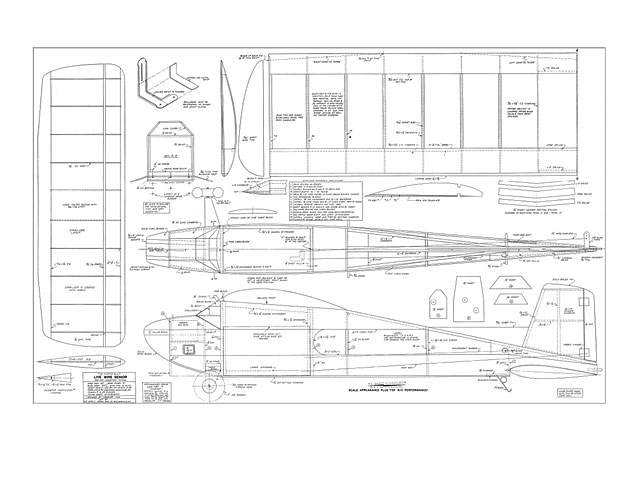 This (the LW Senior) was technically the original Live Wire, it was the first deBolt design for an R/C model. But in terms of actual kits sold and built, the Live Wire Trainer (oz5554) was the first. Because it was believed a smaller wingspan model would sell better.

Let's look at the Live Wire (LW), the grandfather of today's trainer models. If you compare your trainer or 'Sunday Sportster' with this old-time plane, the ancestry should be obvious. Although the LW's design may appear to be simplicity itself, it was the first of its kind, So, how did it come about?

In one afternoon of flying, my friend Tom Parry showed me that my dream of flying R/C planes could become a reality. His Berkely Aerotrol-equipped Brigadeer (oz238) looked like something even this electronic dum-dum could work. To me, all R/C had been flabber-gasting.

Very shortly, I managed to talk flying buddy George Swank into giving me his Aerotrol-equipped Rudder Bug (oz238) he had 'secretly' (we were all control-line fliers!) built, although he had failed to get the Aerotrol equipment to operate. Even to this uninitiated R/C'er, the problem was obvious: the rudder linkage was binding, and the poor little escapement couldn't move it.

So it was out to the field to set up the dipole transmitter antenna, which had to be rotated so that it always faced the model; you had to remember range, which was in short supply for several years, George and I used the control-line circle 'pylon' for the dipole pivot.

After some trials and tribulations, ie crashes, we began daily flying sessions in the evening, and we soon discovered that Tom's success with flying this design had been no accident. We flew in Buffalo, which isn't known as a windy city for naught, but by braving the wind, we learned what it takes to fly R/C aircraft in difficult conditions.

The Bug saw considerable flight time until, during one flight, as darkness set in, we lost sight of it. We found it the next morning, but the RK-61 tube had pooped out, and although we got a new one, we couldn't get it to work. (More extensive instructions surely would have helped!) Anyhow, we thought we had found what was needed for a competent R/C model.

I should note that most Dmeco kits and products originated as personal projects. At the time, control line was in its heyday, and Dmeco was a leading manufacturer. But, as history records, this personal thing drastically changed the company's course.

Bill Winter is a cherished friend of mine, always ready to offer advice. He has been involved in R/C for several years, and as editor of Model Airplane News, he was in on the latest developments. What an opportunity for me! Through phone calls and correspondence with Bill, I learned a great deal about R/C planes. I told him about my basic idea for the LW model. He found the concept so radical that it was hard to contemplate, but he said it could be the way to successful R/C flights. His advice was blunt: DeBolt, you had better know what you're doing before you start.

We collaborated on a long list of design objectives and then reduced it to the essentials. The model should:

1. Be capable of penetrating the wind.
2. Demonstrate flight that's flat with minimal climb tendency.
3. Hold altitude in turns.
4. Show minimal ballooning when turning into the wind.
5. Fly slowly to allow thinking time.
6. Be capable of lifting heavy equipment.
7. Have enough room for R/C equipment.
8. Use equipment that can be transferred to other models.
9. Allow easy maintenance of R/C equipment.
10. Have a rugged structure that can withstand abuse.
11. Have a structure familiar to CL modelers (who were many at the time).
12. Have landing gear that protects the prop and allows easy field repair.

The first four items deal with flight attitude - different from free flight. This was achieved by using a high-lift horizontal tail combined with a lift proportion, between the wing and the tail, that recognized changes in air speed; that way, the plane would maintain a flat flight attitude under all conditions.

Items 5 and 6 are related, Flying speed was kept slow by using low power and low-pitch props. Lift was accomplished by using the 'fly on the wing' principle, setting large-area wing and tail elements at their maximum lift angles.

Items 7, 8 and 9 were accomplished by using a removable R/C unit (box) that was spacious enough to hold all the R/C equipment and could be easily transferred from one model to another. In those days, R/C equipment was precious, and mishaps were common, so many pilots had spare models.

Ten and 11 were no problem for an accomplished control-line flier. The 'sheet and box' C/L style was simply adapted to meet R/C needs. We had expected weight to be a problem, but it wasn't. Twelve was a nasty problem, but we solved it by using control-line-style aluminum gear attached with rubber bands. The gear simply flew off during the inevitable hard landings.

As you can imagine, we had to make many corrections before we were satisfied. But would such a low-powered craft do the trick? Would it be too heavy? Would it fly as it had to? We put together two LW kits, and prolific builder George Swank assembled his first. Given the RK-61 problem, we decided that the C-S 465 radio system would best suit our needs. Boy, did that prove to be the answer for non-electronic types!

We test-glided the LW off a nearby 20-foot-high railroad embankment. You can imagine our jubilation when the first model left the launch in a steady glide that was long enough to allow us to get in a couple of rudder commands. Hey, man, let's try power! As it turned out, by that time, I had my LW ready, so mine made the first powered flight - a successful one.

What followed was a period of euphoria; the LWs flew time after time with few shortcomings. We gladly reported to Bill that the 'radical thing' worked as planned. We had become RC'ers!

Our efforts were rewarded when Swank and I took first and second places at the Canadian R/C Nationals and the Tangerine Internationals within a couple of months of that first flight. Obviously, the LW was a step in the right direction.

The LW concept was the foundation for the kit series that started many of us pilots on the road to R/C success. Above all, the plane offered great, exhilarating, fun-filled flights." 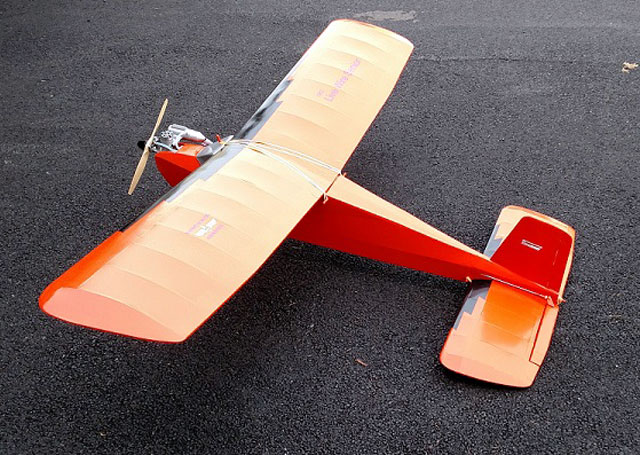 Attached is a photo of my deBolt Live Wire Senior built from your plans [model photo]. Model was built in 2015 and flies several times a year at vintage RC events, in fact I just flew it yesterday. Thank you for the wonderful service you provide to model builders.
ScottWallace_NY - 29/05/2018
Beautiful building job on the Live Wire Senior. If I wasn't so lazy, I'd build it myself :)
James - 15/06/2018
Add a comment