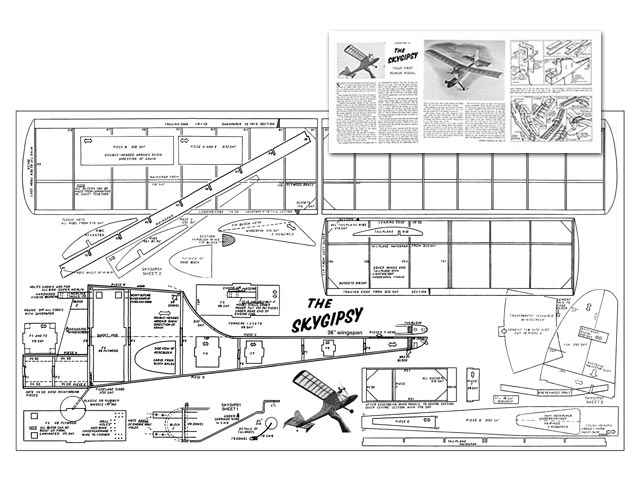 Quote: "Skygipsy has been designed to fit diesel engines of .75 - 1cc capacity. The original Skygipsy is fitted with an Allbon Super Merlin (52/7d) driving a 6x4 in flexible plastic propellor and has the most impressive glide and climb you could wish to see.

When building Skygipsy, if you follow the stage-by-stage sketches (on page 46) and read the notes on flight trimming carefully, you can be assured of possessing a model that will give you hours of steady flying.

A glance at the assembly sketches will give You confidence to begin, as you will immediately recognise the fact that the same building method (sheet sides locked to formers with built-up wings) is employed for SKYGIPSY as for the other models in this book (the GEE-BEE control line trainer excepted). You will, therefore, find the construction familiar and perfectly straightforward.

Cut the hardwood engine bearers (lengths of hardwood are obtainable at your local model shop). Mark on the bearers the positions of formers 3 and 4. Cut out formers 3 and 4 from 1/8 plywood. Check at this stage that the bearer holes are wide enough apart to take the crankcase of the engine you are going to use On the plan, the holes shown are suitable for the Allbon Merlin, Super Merlin and Mills .75 engines.

Form the undercarriage wire and bind to former 3. Now slide the formers into position on the engine bearers. Use a set-square to make sure they are upright on the bearers and at right angles to the hearers when viewed from the top, before the cement hardens.

Now carefully drill the holes for your engine bolts. A very important point: Note that the holes (see plan) are at an angle, so that when the engine is bolted in place it will point slightly to the right (viewed from rear). This off-set angle, as it is called, is important, as it counteracts the twisting action of the propeller (torque), which will try and hank your model steeply and sometimes dangerously to the left..."

MikeN mailed in to say - this was published in the Eagle Book of Model Aircraft circa 1959. 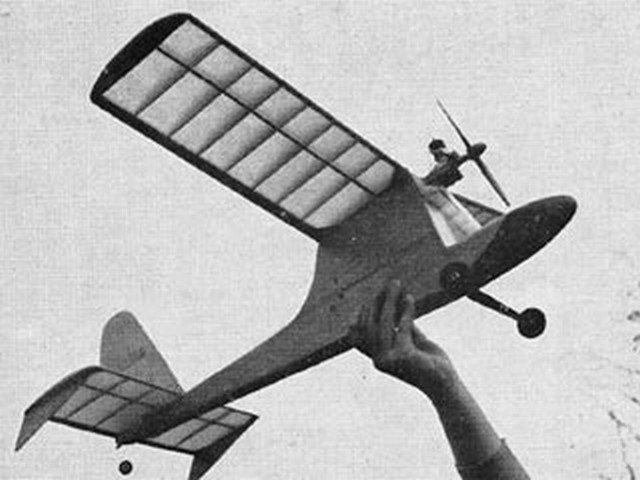 Hi Steve, This is a nice little model that flies well. I first saw the plans in the Eagle Book of Model Aircraft as a mere lad 56-and-a-half years ago, and always meant to build one [see more pics 003, 004]. It took just a week of evenings when I finally got around to it ! Ignore the reference to the wingspan being 27-1/2", it's actually 36". There are some drafting errors, all the wing ribs should be the same spacing, ditto the tail. The fuselage does not need the 'tabs' method of construction, which is unnecessarily complicated, plus it will be stronger/lighter if the top/bottom are sheeted cross-grain with 1/16". The horizontal part of the fin serves no useful purpose, so omit (i.e. use only vertical grain). The wing spar is a fairly weak design, so a subsidiary top-spar would be a good addition. I made some logos and printed them on lightweight white tissue. The ED Baby in my model with about 2 deg downthrust and the same right-thrust, on a 7x4 prop, is plenty powerful enough (the all-up weight is under 9 ounces), and the flight pattern is right-right. Ray Malmstrom overlooked that the engine dumps exhaust all over the wing ! Regards,
PeterScott - 05/09/2015
Just taken a couple of photos of models from your plans built a while ago. This is the Skygipsy, by Ray Malmstrom, OZ 484 [more pics 005, 006]. Fondly remembered from way back and flies as well as it did then. DC Merlin powered.
TrevorT - 24/02/2019
This little fella just came up in the random gallery, a pretty birdie it is, chirping for conversion to electric! The photo in pinks reminds me of a flight box I used to have in pinks like this, with a couple more pink tones making up a psychedelic monstrosity, possibly due to dodgy castor oil. Oh Reputation, poor frail thing you are!
Miguel - 15/10/2019
Please note the original spelling for those searching for a plan, skygipsy spelled differently and one word.
derick - 05/11/2020
Add a comment