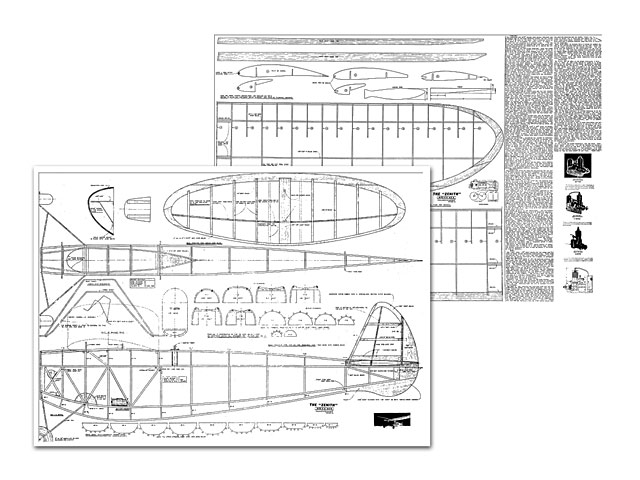 Added alternate version of the plan, thanks to JJ. Quote: "Reproduced from Air Trails, Jan and Feb 1939, by WH Thompson."

Quote: "A national champion, winner of the senior gas event. The Lackey Zenith, by Bill Lackey and Ed Manthy.

The Zenith, winner of the Senior Gas Model Event at the 1938 Nationals, was designed primarily as a contest model. The flight which made the first place was not the result of an overabundance of good luck, but represented the culmination of many months of labor, physical, oral, and mental on the part of William Lackey and Ed Manthy, designers and builders of the model.

The ship was an outgrowth of a 'test' model from which its two outstanding characteristics, durability and efficiency, were incorporated. On this test model, wing and tail sections were changed, structure was hashed and rehashed, and the wing position was varied from high wing to semiflush. Better performance was obtained with the wing in the latter position.

The original ship ran all the gantlets of model planes and survived them all. On some of its flights, numbering well over one hundred, it has picked for landing spots trees, telephone wires, and a lake. It also has had its share of ditches, plowed ground, haystacks, and shrubbery, all of which the model has accepted as a matter of course. Between times it has made consistently good flights, turning them in in the ratio of gliding time to time under power of eight to one, without the help of thermals. It has in its contest life to date never placed below third.

In building this ship, follow the instructions care-fully. This model, when completed, should give you many hours of flying pleasure.

CONSTRUCTION: The longerons are 3/16 square balsa, and should be straight, straight-grained, and hard. Uprights and diagonals are of the same material, except the two pieces of 3/16 x 1/2 in base at the nose. Pin temporarily, to the top longeron, a strip of pine (about 1/2 in in thickness by 4 ft in length) to keep it in a straight line while forming the sides. The sides are constructed by turning one over upon completion and building the other on it, using wax paper between them to prevent their sticking together when cementing the uprights in place.

Before joining the two sides together, form the landing gear of 1/8 music wire. If desired, the front strut may be made of 3/32 wire, as most of the shock in landing is taken care of by the rear strut..." 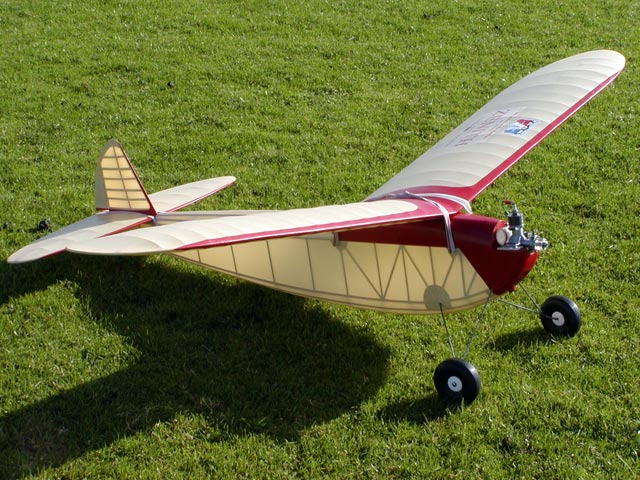