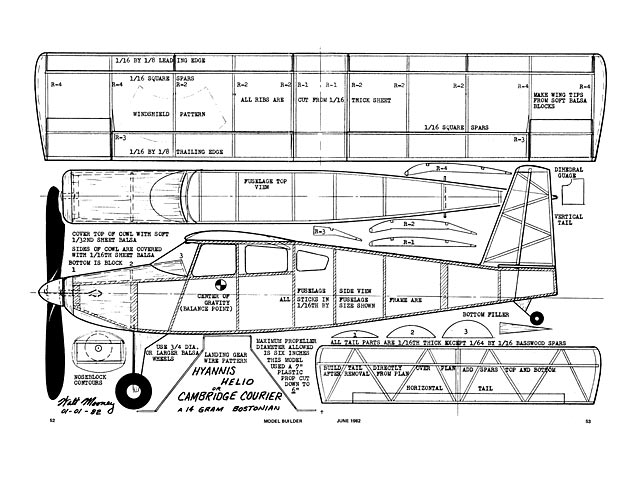 This month's model is not a Peanut and it is not a scale model either. However, it is scale like and it is rela-tively simple to build, and it will really fly well even if it is built by a rank beginner and is not assembled with a lot of skill. The Hyannisport Helio, or Cambridge Courier, take your choice, is built to the Western style Bostonian rules. These are repeated here:

1. Maximum wing span, 16 inches.
2. Maximum wing chord, 3 inches.
3. Maximum length from the thrust bearing to the most aft point on the airplane, 14 inches.
4. Maximum propeller diameter, 6 inches.
5. Two wheels at least 3/4 inches in diameter.
6. The fuselage must contain a theoretical box of the dimensions 1-1/2 x 2-1/2 x 3 inches.
7. Airplane must have a windshield and clear vision to each side of at least one square inch each.
8. Minimum weight without motor must be at least 14 grams.

The Bostonian class was originated on the east coast and their minimum weight is 7 grams. They also give points for charisma at their contests. Out West we have usually decided on some novelty rule for our contests. For instance, one July 4, we required all entries to have an American flag on their model. Further, most Western Bostonians have resembled real airplanesto some extent.

The original Helio Courier was built at Norwood, Massachusetts, a short distance south of Boston. The Courier was a short field airplane and incorporated large slotted flaps and full span leading edge slats. The ailerons were relatively short span with wide chord, (I know because I did the detail design drawings on the prototype Courier). Anyway, the Courier inspired this Bostonian and especially its wing design, which is the one significantly non-standard feature on the model.

The model flew right off the building board and won its first contest on the night of its first test flight. One adjustment was necessary to make the model fly safely in small enough circles for an indoor basketball court. This was the addition of a 3/8 by 1 inch drag flap under the left aileron. The model will fly fine outdoors without it, but will not turn in quite so tight a turn radius.

Most of the model construction techniques are very standard, and so really need no comments, however, one feature of the tail surface and the entire wing structure requires some explanation. The tail surfaces use diagonal ribs to resist warping and have external spars made of thin basswood which are added to both sides after the surfaces are removed from the work board. There are no notches cut for these spars, they are simply cemented on the diagonal ribs and the tail tips. The ends of the spars are sanded to a feather edge at the tail tips. After covering, this structure is very warp resistant.

The wing has four different rib shapes in its construction. R-1 is the rib shape used over the fuselage and is flat bottomed for this reason. The wing tip blocks are also made to this rib shape. All the other ribs have a drooped nose to simulate the slats on the real Helio Courier. However, in the area of the ailerons, the outer R-4 ribs are flat bottomed ail the way back from the droop nose to the trailing edge for no simulated aileron deflection. All the R-2 ribs are made with a drooped aft end to simulate the flaps in a deflected position. The little R-3 ribs are re-quired as the transition from the de-flected flaps to the undeflected ailerons.

The wing is therefore best built in three separate pieces, the center section and the two outer panels. Note that the trailing edge is discontinuous at the flap/aileron interface. A little extra care is required to get this wing assembled, but when it is finally done you have a wing that fits nicely on top of the fuselage, is undercambered for maximum model flight capability, and has built-in washout because of the undeflected aileron sections, for resistance to tip stalling and spiral dives following the stall. Besides, the wing looks a little like the real Helio wing at takeoff and landing.

This Bostonian was covered with tissue remnants from previous model projects, and ended up with yellow wings and horizontal tail, and a blue fuselage and vertical tail. A black tissue antiglare panel was put on the top of the fuselage forward of the wing. The resulting color scheme looked like a military airplane of the 1930's so military insignia was added. Control surface outlines were added using a black fineline felt tip pen. The cowl inlet and the tires were simulated with flat black paint.

If your model balances at the CG as mine did, the model should fly with only minor adjustments. For outdoor flying you will not need the drag flap, but if you are flying in the typical high school or recreational center gym, the drag flap is a useful device to get a tight enough turn to miss the walls.

Have fun with this semi-scale whimsical Bostonian, I did. Incidently, the winning time for its first contest was a flight of just over 40 seconds. Outdoors this model will be easy to lose in a thermal."

Great flyer...indoor or out. I built one out of the lightest balsa I could find. By the time I got it trimmed, it was junk. Built another out of stouter balsa and had great flights outdoors....easily a minute or 2.
Dorme - 22/10/2020
The Hyannis Helio makes a fine micro R/C conversion. My model served as a test bed for different motor arrangements - including a single, twin (seen here) and even a trimotor! All variants flew well and had a slow stall speed thanks to the drooped LE and flaps. A clever design [pic 004].
ChrisMoes - 03/11/2020
Add a comment