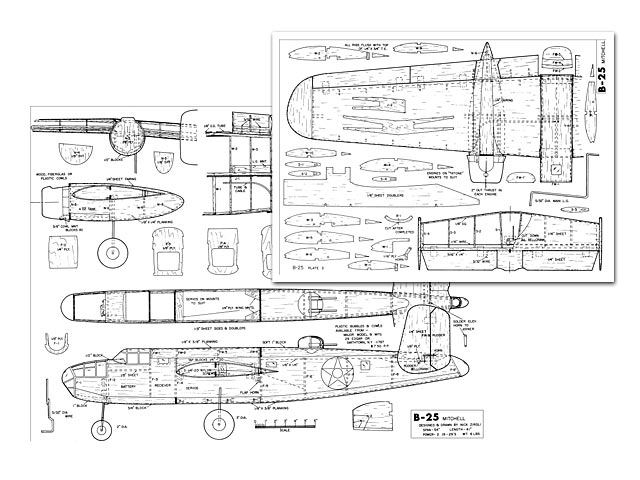 Quote: "The North American B-25 Mitchell was one of the most appealing medium bombers of WWII. It's versatility was unmatched in its day. There was probably no greater morale booster of WWII than Jimmy Doolittle's famous Tokyo raid. Sixteen B-25's took off the 467 foot deck of the carrier Hornet with 1,141 gallons of fuel and four 500 pound bombs apiece. This was an unbelievable feat in 1942. The attack did little damage to Tokyo and other areas that were bombed. Jimmy Doolittle's greatest victory was the fact that it could be done. There were no losses of planes over Japan; however, bad weather caused the loss of all but one plane which landed in Russia.

The first B-25 was flown in August, 1940. Steady refinements and an increase in firepower made the B-25 a formidable combat machine. Our model is patterned after Jimmy Doolittle's Tokyo Raider. It is not the most colorful version as can be seen in Profile Publications 059, but in dirtied up war colors it looks very realistic.

This is a small model as far as twins of this type go, but this is what I was after. The wingspan is 54 in, the area approximately 430 sq inches and the weight 6 pounds, 1 ounce dry. A little quick figuring between the weight and area will show that this one is definitely in the medium bomber class.

This is not a true scale model. It was scaled 3/4 in to 1 foot to give the small size desired. However, at that scale the wing area would be about 335 sq inches, much too small to be practical. So, the wing and stabilizer were increased proportionally in size and the fuselage left pretty much to the 3/4 in size. In its finished form it does not look out of proportion to all but the best trained eye.

All six channels of the Micro Avionics systems were put to use, the two auxiliaries operating flaps and a bomb drop with the bomb bay doors opening and closing. This would not be possible if it were not for the small size of the servos. Three are mounted in the wing for ailerons, throttles and flaps. The three remaining are in the fuselage operating rudder, nose wheel, elevators and bomb drop. I doubt that six larger servos would fit in the rather limited space available. However, four operating the basic functions could probably be squeezed in.

I was really a little concerned if the two Webra .20's had the power to fly the model in a reasonable fashion. Previous experience with these engines proved that they were quite powerful and most important, in a twin, reliable. However, in such a small heavy plane, I just wasn't sure.

Well, any doubts I had flew out the window on the first flight. The Webras swinging 9-4 Tornado props Were a perfect match for the B-25. It literally flew off the board. The bomb bay worked perfectly, but the flaps tended to make the plane balloon more than I liked. There is about 40 degrees max. flap travel now. I am going to increase it to 50 degrees or more to up the drag and reduce lift. It was not tried at this time, but should help reduce or eliminate the ballooning.

The best thing about a heavily loaded model is landing it. A predictable descent can be set up that will not be altered by the slightest gust of wind. I let it settle in at a rather steep angle and added power just before touchdown to flare it out without stalling it. Another plus for the heavy loading is that a very low engine idle is required for landing. A slightly faster, more reliable idle can be tolerated.

I don't know how the model performs on one engine and I am not going out of my way Co find out. If sufficient altittide is available when one engine quits I would cut the one remaining engine running to idle and bring it in as if it were dead stick. During a takeoff or low level maneuver such as touch and go, if one engine quits things may get a little nervous..." 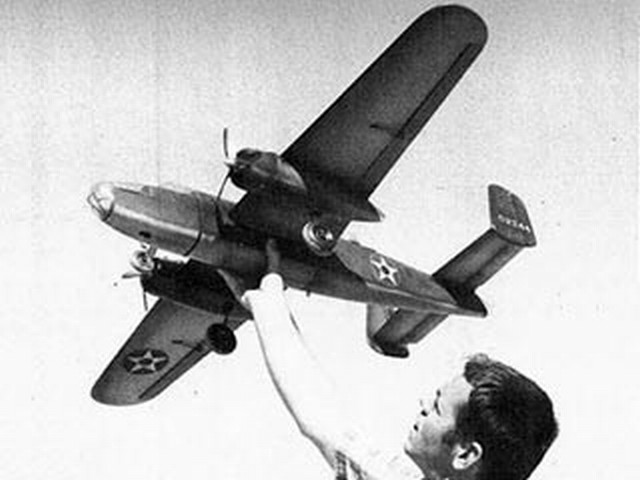