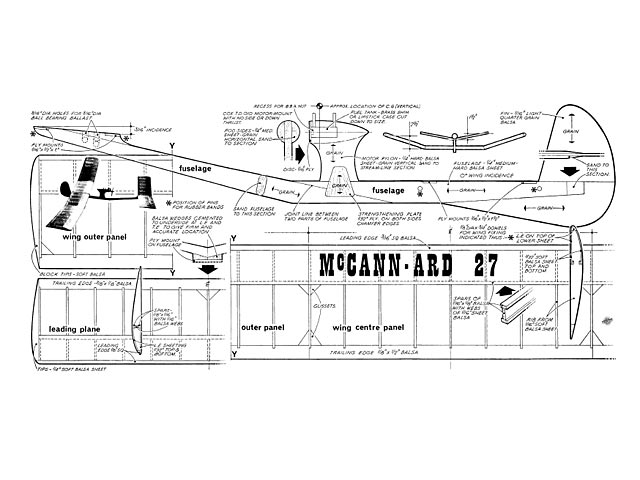 Quote: "To test out this revised layout, a small (27in span) model was built powered by a TD .010 and this model is a real pleasure to fly. It seems to be quite free from vices and stability is impressive. In spite of such a small engine (which actually develops suprising power) the climb is very steep and 'on rails', and the glide very good. The layout thus arrived at seems to be the most promising for duration canards, and will give conventional models a run for their money. Development is still continuing and the author won't be content until competition results show the Canard to be superior!

During the year the following points have been noted about Canard building and flying:

1. Side area ahead of the CG should be kept to a minimum, with a single large fin to be most satisfactory.

2. An elevated leading plane increases stability, and reduces need for large angles of incidence, which bring the leading plane nearer to the stall. Canards are sensitive to leading plane alignment, it must be 'square' in all respects. The reason for the cranked fuselage, is to raise the leading plane without having to use a pylon, which would increase side area.

3. Wing to be at 0° incidence. Various angles have been tried. with compensating increases to leading plane incidence to maintain longitudinal dihedral_ Increasing wing incidence makes the model hang back on the climb and appears to increase sinking speed on the glide.

5. Angle of climb. It appears that this can be varied by altering the leading plane incidence. with a compensat-ing correction of CG position. Increasing incidence steepens the climb and vice versa. Providing extremes are avoided, the author's Canards have not shown any looping tendencies, possibly due to the high thrust line.

6. Wind penetration. Increasing wind velocity has, in the author's models, produced a slightly shallower climb, the high thrust leaning the model with the wind. The straight into wind climb is no doubt aided by the wing being at the rear. This is the largest component producing drag, and being well behind the CG, gives weathercock stability.

It is hoped that interest may be stimulated in Canards. They have proved a stimulating mental exercise and arouse interest whenever they are flown. The author is convinced that a little more effort devoted to Canards will produce a duration machine capable of rivalling the performance of conventional pylon models, which, even though they have had many years development, still have a lot to be desired. All the author's larger models have used GO 795 For both wing and leading plane sections, which in practice have proven to be excellent.

For those wishing to build a Canard, full size plans of McCann-ard 27 are given here. This model incor-porates the lessons learned during a year of Canard flying and is simple to fly and success assured. The following notes will assist the building and flying of McCann-and 27.

Fuselage. Medium hard, 1/4 in thick straight grained balsa is used. Carefully pre-cement all fuselage joints for maximum strength. The two parts forming the fuselage are first assembled, followed by the motor pylon and nacelle sides, carved and sanded to section. At this stage the tank is installed..." 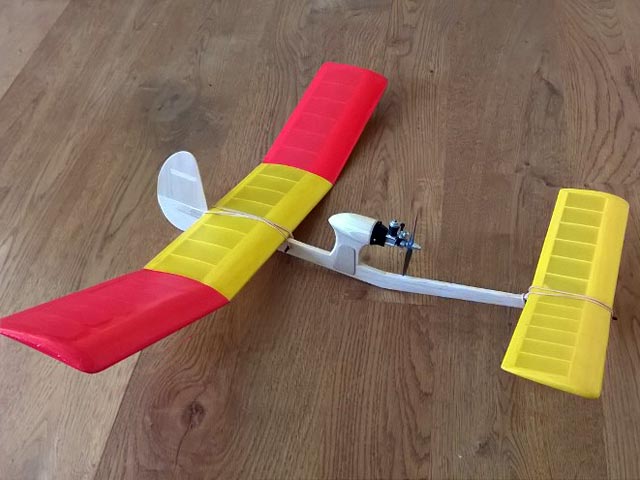