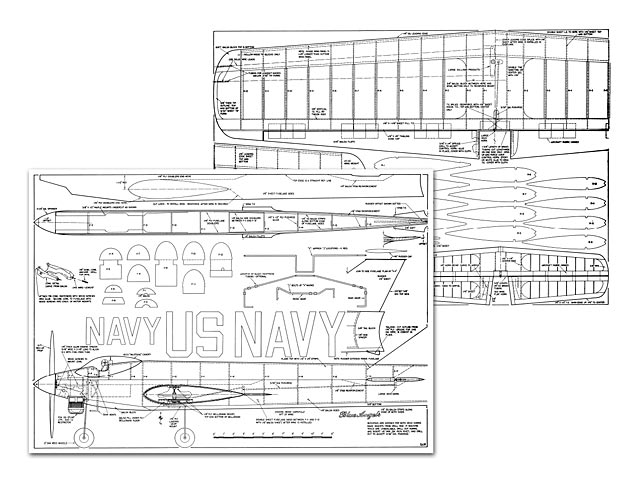 Quote: "The Blue Angel, by Larry Scarinzi. The plane, the engine, the pilot, trim, adjust and work. These are the necessary ingredients for a successful competition stunt model.

It was about two months before the Dallas nationals when the old yearning to attend this annual modelers convention came back. A casual comment to 17 year old Barry Simonds of Rich's Hobbytowne brought an enthusiastic reply that he would also like to attend. Did he really mean this? Would he actually drive the 1,800 miles to Dallas to fly in a model contest and even worse - in my old 1953 Pontiac! To be sure he was serious I explained how long a trip it would be and that he would be flying against the nations best with an airplane that he hadn't even started to build yet.

When he pondered his answer I also reminded him that he could expect no help from me as I too had a new model to build. Barry replied that he could finish the model in time and would still like to go. His humble sincerity convinced me that I now had a traveling companion. Little did I know that we were nurturing the next Senior National Stunt Champ. Barry proved to be the 'Dark Horse of the East'. We were now both obligated to each other to complete our models and make the trip (1,800 miles in a 1953 Pontiac! - kid must be nuts!)

Now came the problem of designing a new model that could justifiably claim some of those hard-earned appearance points and still turn in a good pattern. I have always maintained that a good big airplane will outfly a good small airplane. I also feel that the limitation of this theory is the point where the models length or size is so great that it just takes appreciably more room to fly through maneuvers properly. The finished product had to have ample wing area to keep the wing loading low enough to safely execute the AMA pattern in average Texas wind conditions.

The wing is the heart of any stunt design. Correct wing loading along with properly worked out nose and tail moments, CG location and 'mass weight' concentrations should give us a model that would groove easily giving smooth flying characteristics yet still retain a margin of reserve turning capability. All of these details had to be worked out and designed' into an airframe that was attractive yet relatively simple as building time was short.

The choice of a powerplant was the first step. Although other engines will work, a Fox .59 was chosen for this model. It was decided that a .59 would certainly have enough power for any model that I would build. By properly restricting the intake and adjusting the compression ratio (by adding head gaskets) I felt that smooth vibration free power was available. The .59 seemed to have a lower vibration level than a lot of .35's, hence it was felt that the typical .35 stunt model structure would safely hold the big .59. This became even more evident as the intake throat diameter was reduced to .300 and lower using restrictors.

Having chosen a powerplant the next step was a choice of the type and shape of airframe that our design criteria must be worked into. In order to avoid a case of 'acute brain strain' it was decided not to try to come up with an original model shape, but to more easily copy a real airplane to some degree.

An estimate of the finished weight of the model was needed in order to determine the wing area required. Considering such factors as the type of structure, weight of powerplant and other related items, we came up with an estimate of 50 ozs., for the finished model. Another consideration that had to be dealt with was the weight and drag of the flying lines that the model had to fly on. I was used to building stunt models for .35's that can fly on 60-66' of .015 diameter lines. This one had to support substantially heavier 70 ft lines of .018 diameter wire.

Throwing all of this into our 'exact approximations' formula, it was concluded that 600 to 610 square inches of wing area would be needed to give us what we were looking for. Some may wince at the thought of using a .59 in a 600 square inch model, as many a past expert has pretty well convinced the modeling public that anywhere from 700 to 1,000 square inches of wing area is needed for a .59-.60 powered stunt model. I will briefly outline the basis for my beliefs on the big engine comparatively small model..." 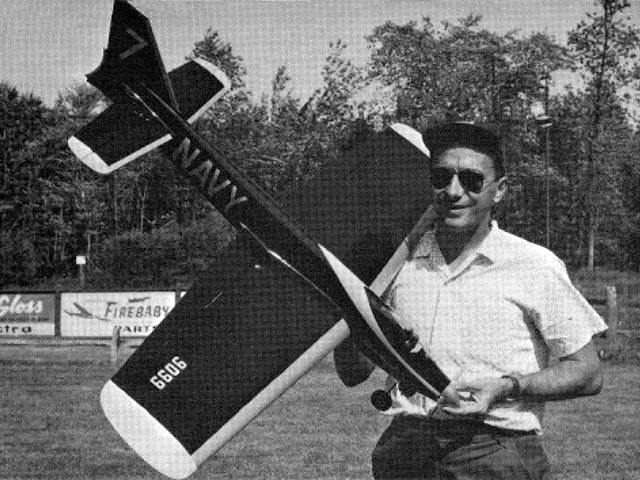 I would love to see the construction article for this airplane. Does anyone have the Flying Models magazine in which it appeared?
Mel Gray - 05/11/2021
Add a comment