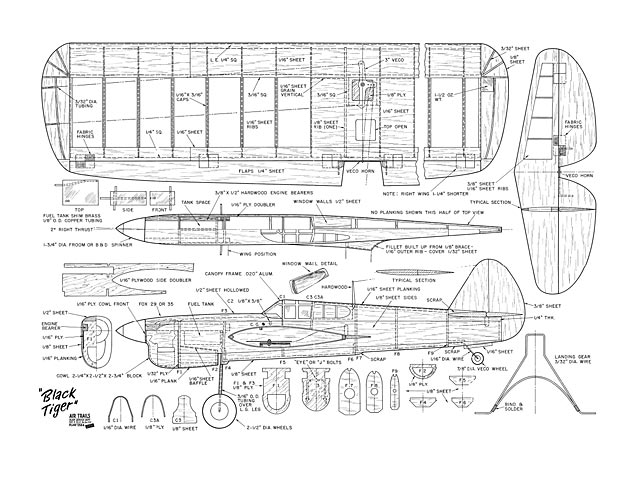 Quote: "This stunt model has been taking Dixie by storm! Bob's many wins with black beauty can be duplicated by you. Black Tiger by Bob Elliott.

The Black Tiger is the result of ideas and inspiration from my trip to the '51 Nationals in Dallas, Texas. For two seasons I had done very well in competition throughout the Southeast with a smaller ship powered with a Veco .29, but placed third in Dallas. I realized that any stunt man who is out to do his best must have an airplane to match his competition, and took note of the trend of stunt ships flown by the winners. George Aldrich and Don Still were most helpful. I found them not only fine stunters but fine fellows personally. George advised me to use a larger ship with smoother flying characteristics.

His suggestion started my search for just such a ship. It would have to be one with clean lines, realistic proportions. It would have to have that 'second look' appeal! On my drawing board the Tiger took shape. Simple in design, simple in construction, box-type fuselage that a novice as well as an expert would have little trouble building into a good-looking, smooth-flying airplane.

During the winter of '51 - '52 construction started on this semi-scale stunt ship resembling the P-40 Warhawk. In May '52 it was completed. During the season that followed it was given full appearance points in all meets in the Southeast. A sister ship built and flown by Harris Grimes (1951 National Junior Champ) in the '52 Plymouth Internationals in Detroit also gained full appearance points.

The Black Tiger has an overall length of 30 inches, weighs approximately 32 ounces and has a wingspan of 45-1/2 inches with approximately 448 square inches of wing area, including flaps. 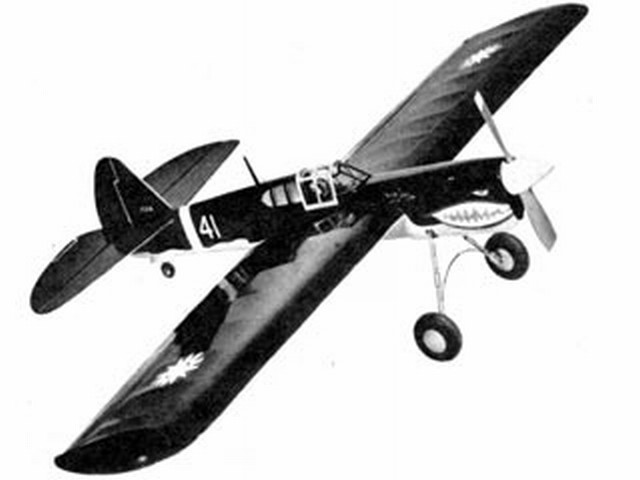