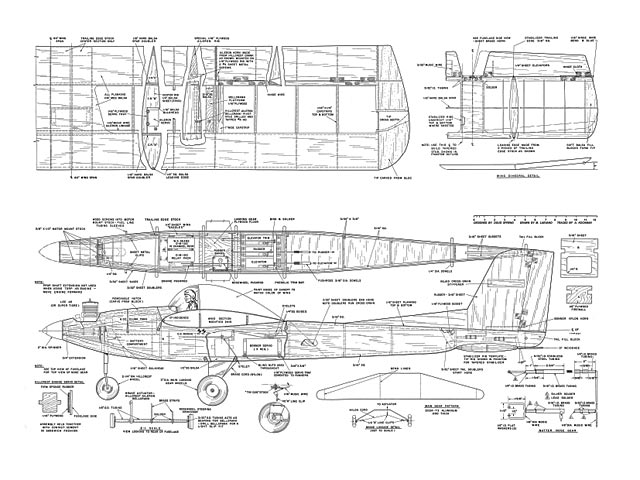 Having stumbled upon a happy combination of wing, stab and fuselage called Stormer (oz5794) I decided, after the Dallas Nats, to see if the basic planform could be improved upon.

Actually, this did not start out as a well planned research project. Let's face it, I prang frequently, and I hate to build two airplanes exactly alike. So, after demolishing 'Stormer I' while attempting a landing, I was faced with the prospect of building a new ship. So Stormer II was born.

This was the first of the 'Flat Top' Stormers. The flat top was a result of my being too lazy to carve that long turtle deck aft of the wing. It was very nicely rationalized by my saying: Look Ma, I'm saving weight and improving the appearance. Only other difference was in the wing - I ran the hinge line through the tip. This eliminated a 'gaposis' problem. Stormer II flew great and it was almost a pound lighter than its predecessor. After a short, brilliant career it went the way of many good ships (straight down) due to a mixup in frequencies.

It was about this point when I encountered the nasty rumor that Stormer was ugly. Trouble was - it was true! I had an airplane only a mother could love! Says I to myself, 'This job would look real cool with a tapered wing and stab.' So back to the drawing board; after a short hibernation in the workshop Stormer III, was hatched. The results were beyond my fondest expectations - it was really a thing of beauty. It had a racy look, a feeling of speed. And that was its trouble - it flew too darn fast. In fact, all you had to do was breathe on a button and it practically leaped out of its freshly doped silk jacket.

I might sum it up by saying it flew just like another 'leading brand' of multi stunt ship. But the die was cast; here it was, a month before Nats time and I was stuck with a ship that hopped through the pattern like a homesick Kangaroo! But, alas, two weeks before the big meet - prangsville! It was a total wreck. So, nothing to do but piece

together what was left of the previous ships, and I had but a week to do it in.

This is how 'Stormer IV' came into being. It consisted of the repaired fuse-lage of Stormer II and a wing a la Don Mathes. This wing was longer (64 inches sans tips), but I had wanted to see how a little added area would work anyhow. Otherwise, it was perfect - it had Dale Nutter style upswept tips, and a 15% section. So by the following Saturday I was ready to paint and on Sunday came the test flight. From the start it was a real thumb pleaser, the smoothest Stormer yet. It had the groovy characteristic of the first one and, due to its longer wing, it was light on its feet and slower than its ancestors.

After one more full weekend of practice I was Philly-bound. And so it is that one year later I can offer these two improvements:

Now maybe you think the darned thing is still ugly. Okay, we won't fight! A 'pretty' airplane is in the works, whether it will perform equally well will remain an unanswered question for at least another year because I am not about to goof again with the Internats so near at hand.

So she is a little easier to build and, after all, isn't ease of construction of paramount importance when one 'bends' as many as I do? No, I'm not insulting you experts. The novice deserves some consideration, doesn't he? Today's novice will be tomorrow's expert if he isn't scared off by a balsawood jigsaw puzzle. Today's novice will also benefit greatly if his new toy doesn't snap roll into the deck the first time he tries to stretch the glide a little. Today's novice will also be just a little better off if his pride and "multi" joy doesn't make cute little "sonic booms" in straight and level flight.

All this brings us right to the point. What is needed is "an airplane for the masses." This means an airplane easy to build, that flies slow enough to train on, yet will turn in a contest-caliber per-formance when required. As a means to this end I have utilized in Stormer:

These features were elaborated upon in the first Stormer article last year (April 1961 American Modeler).

Please notice that you are now offered two sizes of wing and two shapes of stabilizer. There is a long wing (64 in sans tip) for those of you who are still freshman in the art, and a short (60 in without tips) one for you seniors that like a little zip in yer ship.

I flew the long wing at the Nats. It rolls a little slower and the airspeed is a bit less than the short wing. This boils down to giving you more time to think during a maneuver. If anybody can con-vince me that this is a disadvantage, I'll accept a position writing ad copy for Top Flite!

The tapered stab is for you 'looks' buffs with well equipped workshops. The optional wing and stab is called out by separate center lines and a phantom out-line on the plans.

Performance-wise there is no difference between the two stabs. Absolutely not! do not show the tapered wing - this is supposed to be a stunt ship, not a pylon racer. (Although if any of you 'Top Ten' from Chicago request the tapered wing I might make an exception.) For explicit building instructions, I again refer you the April '61 AM. I'm getting writers cramps - and the changes are self explanatory anyhoo!"

Article pages, text and pics, thanks to JeffMac. 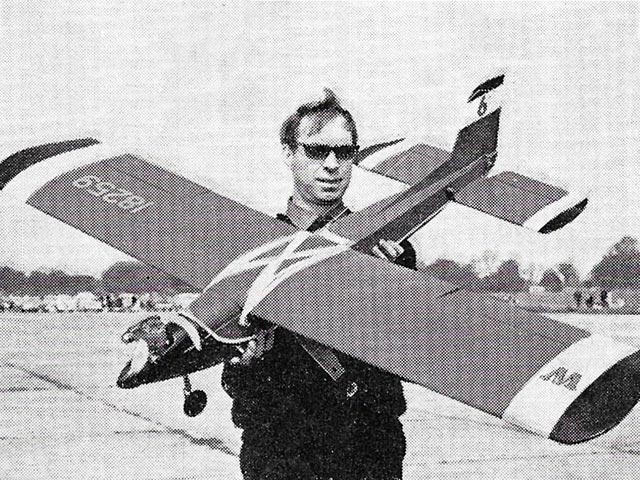 The Svensen kit called this model Flattop Stormer, and power was 35 to 60 no muffler shown. I can just fly my plane with a ST45 and muffler. I went back to my Merco 61 with muffler and have a couple of oz of wt in the nose. Floats like a dream and can easily pull out of inverted loops in slow motion!! Still have original Merco 61, plans, box and plane from 40 years or so ago. Last flown 2 years ago carefully.
skiss - 04/01/2015
Hi Steve, Doug Spreng won the U.S Nationals in radio control Multi (as it was then called) twice in 1960 and 1961 with an airplane called Stormer. I had to build a Stormer. I started out building the Stormer and thought if I wanted to finish the plane in a reasonable amount of time, it would have to be a Flattop Stormer. Eliminating most of the carving and planking would shorten the building time and Doug said they both fly the same. I finished the plane with an old O.S. .40 for power. I then thought hey, this is a good flying plane why not electrify it so it will last longer. (no oil soaked balsa over time). Here are some pictures, then and now [more pics 003-005]. Once again, thank you so much for providing us with this great archive of model airplane plans.
JimHales - 16/05/2016
Back in the early sixties, I lusted after the Stormer, popular with the Mobile club at the time. There was no way I could afford the required reed radio set it used, and my only building area was a drawing board in a bedroom shared with my brother, restricting my efforts to small single channel models. Club member Gene Mathis always had at least one Stormer ready to fly and another in progress. It flew soooo much better than most of the ARF stuff we see now. But Spreng has another claim to fame. He invented the servo circuit we still use today, developed for his Digicon system, the first commercially available digital radio. He never patented the circuit and all the rest of the radio systems immediately copied his idea. The basic idea has not changed in 50 years. You can take his original servo, change the plug and center-tapped battery, and it will work perfectly in a modern receiver, no need to adjust the centering. If I can find a few more round tuits, I'll have to finally build a Stormer.
DougSmith - 12/03/2017
Add a comment