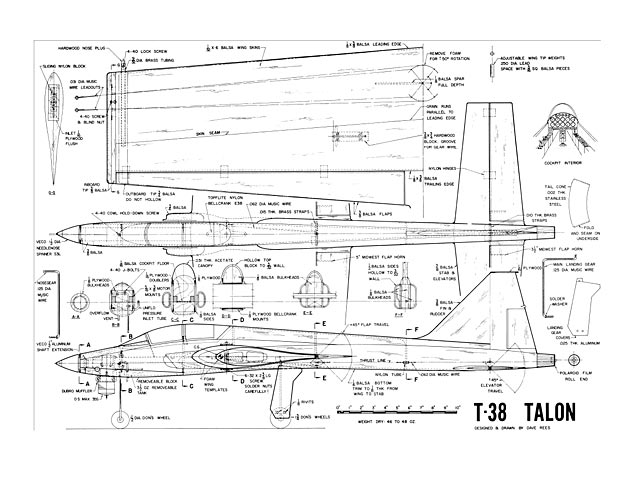 Quote: "A T-38 at the Reading Air Show was the inspiration for a very different looking C/L Stunter with intriguing lines and performance to hold its own flying with the experts. C/L Stunt Talon, by Dave Rees

The first 'Talon' I had ever seen up close was at the '73 Reading Air Show where the Air Force put one on static display. As I walked up to it, the sleek, unusual profile struck me as an ideal one for a Semi-Scale Stunter. A week later I was busy at the drawing board trying to capture the flavor of the Talon while the memory was still fresh in my mind.

This plane is probably not going to be your first step up from a profile Stunter, so I am not going to write a glue this to that discourse. I am assuming you have built at least one Nobler (oz6212), are fairly familiar with building a competitive Stunt plane, and know how they fly. I will thus give only such construction notes as are peculiar to this design, and present the rest under general headings which I hope you will find more informative.

Foam Wings. For those of you who are not flying foam winged Stunters, I wish to urge you strongly in that direction. In my mind they are unquestionably the best construction method for a model aircraft to be used in this event. I think fellows like Bob Hunt of Control Specialties Co (Box 268, Middlesex, N.J. 08846), and any others who helped bring the foam Stunt wing to its present state of the art, deserve a great deal of credit for their efforts.

First on the list of advantages to me would come accuracy of airfoil and permanent freedom from warps. A 1/16 in one way or the other on an airfoil can mean the difference between an ultra-responsive super-stunter, and one that won't fly right even if you put a .60 in it.

Next would be speed and convenience of construction, and the ability to rub up a better finish. They also stand much more abuse during a hard season of flying than a built-up wing will. It is possible to make a built-up wing which is lighter, but you really have to work at it, and you do so at the expense of some of the aforementioned advantages. Most Stunt flyers on the east coast that I have had the privilege of meeting are using them.

Whether you buy the foam cores or a finished skinned wing, follow the assembly instructions included with them explicitly. They were arrived at after lots of experimentation, and are necessary for the successful use of a foam wing. The laminar flow airfoil, used on this design to present a more undisturbed flow of the air to the flaps for sharper turns, would be difficult to achieve with a built-up wing construction.

Cements. There is much to be written about the use of today's adhesives in an aerobatics model. Adhesives fall into two basic categories: solvent release types that harden by exposure to the air, or 'drying'; and chemical reaction types which harden after the two parts necessary to complete a chemical reaction are mixed together, air not being required. All cements must be used on clean bare wood for highest bond strength.

The principal advantages of the aromatic solvent glues such as Ambroid are their light weight and their ability to be sanded and carved easily, They do not form as strong a bond as other types, but they can be used in lower stressed joints. Any joint that will be presented directly to the finished surface of the model should be made with Ambroid. There is some tendency of this glue to bleed through light colored dopes, but this can easily be sealed by spraying a light undercoat of silver on first. Use for seams in wing skins, joining rudder parts, cementing top and bottom blocks to fuselage, and rear three bulkheads. Never use on foam as it dissolves it..." 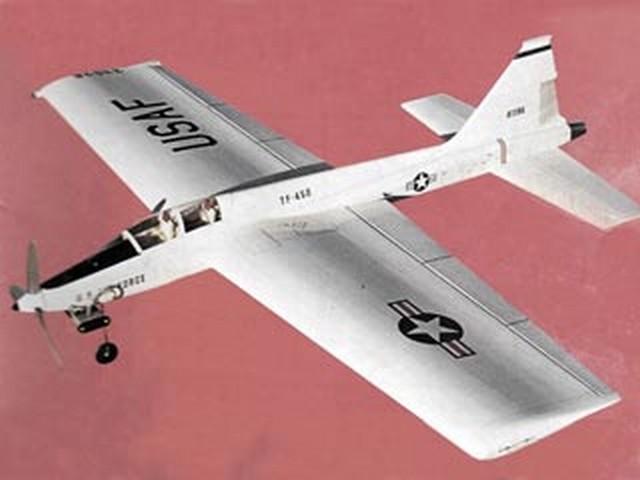