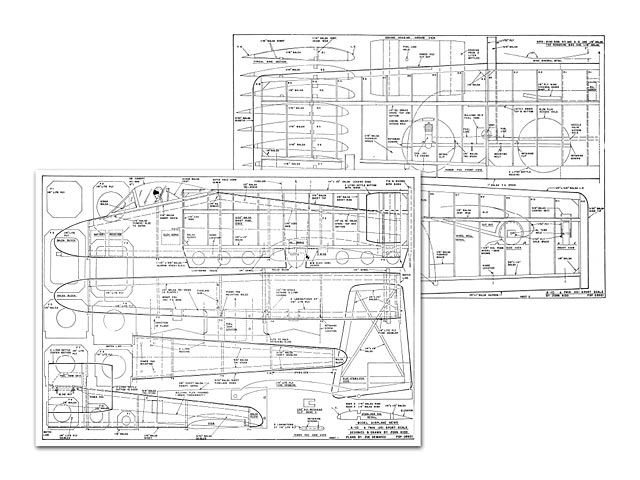 Quote: "Featuring a box fuselage and simple built-up wings, this model of the A-10 Warthog is extremely affordable, easy to construct and easy to fly. Power is provided by two Cox TD engines (housed in two-litre soda bottles) turning 5x3 propellors that have been cut down to 4in diameter. Unlike many twins, this model will fly stably with one engine out.

This being my first attempt at designing and scratch-building, I knew I really had an education ahead of me. First, I had to gather as much information about the Fairchild A-10 (Warthog) Thunderbolt II as I could. A trip over to New Orleans to some of the bigger hobby shops seemed in order.

After picking out the appropriate Squadron/ Signal publication, plastic models and some other information, I asked about the feasibility
of such a project. With a quick glance - Sounds ambitious - was all the man said! Talk about lack of enthusiasm! The mission was obvious: this plane had to be built! And even when the prototype was being built, the low snickers from the 'experts' showed their disbelief. Nevertheless, the plane was built and won fourth place in the Model Airplane News 2nd Annual Design Contest. So there! The moral of the story? No matter how many unenthusiastic, disbelieving 'experts' come your way, press on! Believe!

BUILDING THE A-10. One of the first obstacles was choosing the engines. I knew I wanted a small, light, simple model. The economics of building a full-blown, two-fan, twin-engine, snarling, fully loaded A-10 with retracts and flaps made it out of the question. We had just had a new addition to the family, and though my wife is patient and understanding, she isn't crazy. It became apparent that one of the Cox * TeeDee series would be the best choice for this application. Fora small, light, inexpensive means of propulsion, the Cox TeeDee engines are hard to beat.

The next apparent problem was the construction of the 'jet' housings. At first, I experimented with large beer cans. These proved to be heavier than I had imagined and, after a few tests, they were dented and worn. I tried rolling my own balsa, but it was too fragile. I needed something more flexible and durable. Have you ever noticed that if you turn a two-liter soda bottle on its side, it looks like a jet engine housing? Was that the answer? With a little reinforcement. I thought it might work. And besides, if it wears out, the supply of replacements is almost endless. After these problems had been worked out, I really got serious.

The A-10 is extremely easy to build. Its fuselage is a 'box' construction with an angle here and there. The wing is built in three parts using a typical balsa construction.

Before you start, there are a few things to consider. Use the lightest balsa possible. I took the time to weigh two 'identical' pieces of balsa. One piece was lighter in color, had less grain and weighed 35 grams; another was darker, had more grain and weighed 72 grams! It's imperative that you use light balsa - especially on the fuselage sides and wing ribs. The target weight, with engines and radio installed, is 2-1/2 pounds. The lighter, the better. Now, let's get specific.

The Wing. The wing is built in three segments, and you start with the center one. Begin by laying down the 1/4-inch square spruce spar and the
1/4 x 1/8-inch balsa brace. Cut out and position the bottom sheeting, and glue it to the spars. (The entire aircraft is constructed using CA glue.) Position the trailing edge, and glue it to the bottom sheeting. When making your center wing ribs, use the "'stack-and-cut' method..." 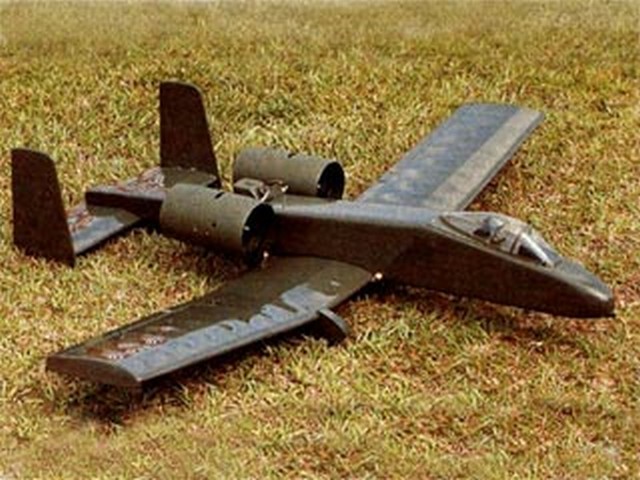