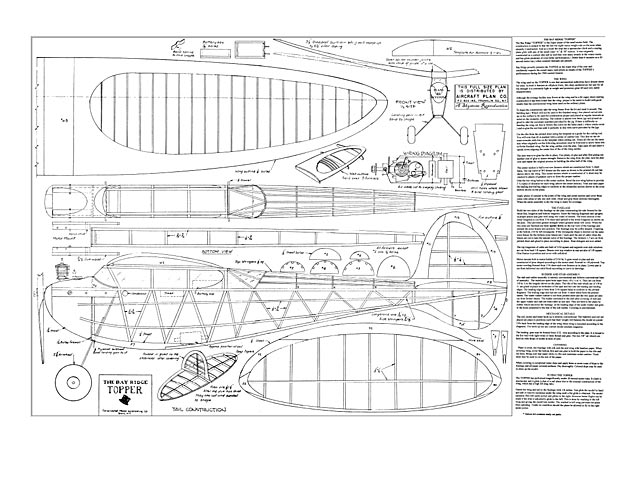 This plan seems to be essentially a kit version of Gordon Murray's Answer (oz3) design, with slightly enlarged tail surfaces.

Quote: "The Bay Ridge TOPPER is the Super plane of the small motor field. The construction is unique in that it hits the eight ounce weight rule on the nose when properly constructed. And as a result the ship has a spectacular climb and a soaring plane glide with any of the small class A & B motors. It was originally constructed as a contest ship and as such has won many awards in the winter meets and has given promises of even better performances, (better than 6 minutes on a 20 second motor run) when summer thermals are present.

Bay Ridge proudly presents the TOPPER as the super ship of the year and confidently expects the award of many cash prizes as results of the TOPPER's performances during the 1940 contest season.

The wing used on the TOPPER is one that aeronautical authorities have dreamt about for years. In brief it features an elliptical form, thin deep cambered air foil and for all the strength it is extremely light in weight and possesses great lift and very stable characteristics.

Although the average builder may frown at the wing and be a bit cagey about starting construction, it has been found that the wing proper is far easier to build with good results than the conventional wing form used on the ordinary plane.

To begin the construction take the wing frame from the kit and sand it smooth. The building jigs (which will not be used in the finished wing) are placed curved side up on the surface to be used for construction proper and placed at regular intervals as noted on the isometric drawing.

The outline is placed over these jigs and pinned and glued to take the curvature (camber) provided by the jig. If there is difficulty in bending the wing out line to follow this curve let the balsa crack (where cracks occur) then re-glue the outline until it is perfectly in line with curve provided by the jigs.

Cut the ribs from the printed sheet using the template as a guide for the cutting tool. You will note that each rib is marked with a center of camber line. This line on the rib must coincide with the line on the template when cutting out. Since all ribs are the same size when originally cut the following procedure must be followed to allow these ribs to fit the finished wing..." 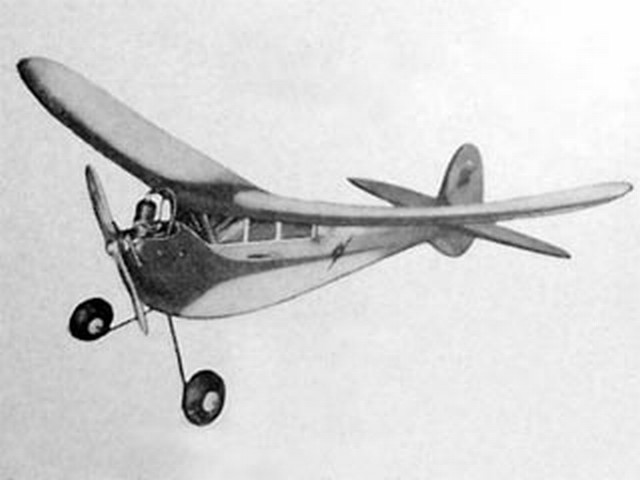