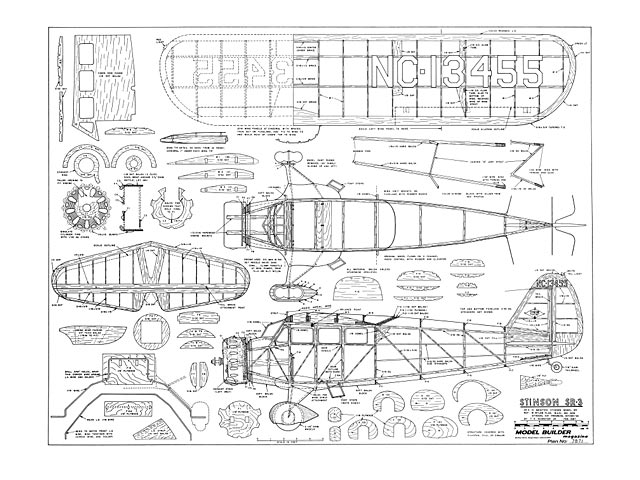 Quote: "Hi Steve - Here is Ted Schreyer's Stinson SR-3 from Model Builder magazine issue 07-87. I will confess to spending a bit more time than usual on this beauty! The design is a touch obscure and oozes character."

Quote: "By TED SCHREYER... A lifelong dream of building and flying a replica of a plane of his youth led the writer to this scale RFC project. Power is from an OS. .10, with rudder and elevator control. Plans are available.

The Stinson SR-3 is like an unlisted phone; it's there, but only a few people know it. Here's the story. In the summer of 42, I was an airport orphan, as both parents were off learning to fly Piper Cubs. One of the instructors took pity on me and asked if I would ride in the big black and silver Stinson as an observer while he and his student were busy with the instrument lesson. Wow!

Martin College Advanced Aviation was lettered on the cabin door, and the interior was big and roomy with leather upholstery and a smell like a taxi cab; cigarette smoke, sweat, metal, and fabric, and gasoline fumes. Even belted in I swam around in the rear seat while the pilot and student sat up ahead and discussed the pending instrument lesson.

The student wore green goggles which allowed him to see everything inside the cabin, but the front and sides of the windshield had red celluloid covering so the net effect was a black view of everything outside. When that big silver prop started swinging around in front of the sunflecked windshield and the Lycoming 215 caught with a roar and blowing exhaust smoke, it was only the beginning. As we taxied out, the whole airplane rattled and bounced as the wheels crunched on the gravel. Then came the check and run-up at the end of the runway, and with a roar we went bounding and thumping down the runway, tail up and swaying around until suddenly the only sounds were the throbbing of the engine and the whistle of the wind, and we were leaving the green grass and brown farm fields far below. I watched the underside of the wing - heavily doped fabric - denting in and out as the big plane hit thermals and air pockets. I made eight flights that sum-mer in NC13455 and another similar SR-3, NC13482, painted red and blue.

Evidently it was a modified Model SR, because the photos show a lot of differences with the Wylam plan of the SR. For example, the top of the SR-3 windshield is flat, and the point where the side of the windshield joins the wing is back of the wing leading edge, there is no wing-mounted landing light (NC13482 had a light in the left landing gear fairing), cowl bumps are different, aileron horns in a different location, rudder shape different, and both SR-3s were equipped with radio aerials on the top and bottom of the fuselage.

Presented here is a 1-1/16 inch to the foot scale model for R/C fun flying and maybe a local contest or two. The model flies well enough to go free flight if you've got a good-sized open flying field. Rudder and elevator control were used on the model, and the 0.5. Max .10 R/C engine had the throttle clamped at about 60% power to provide realistic flights. Ailerons were built into the model, for appearance sake, but were non-operable, and have been left off the plan for that reason.

This is a model that one should find enjoyable to build. The construction is not difficult, but does require time and effort to complete. I've always enjoyed building. As a kid I made hundreds of Comet, Megow, and Guillow kits, none of which lived up to expectations for smooth, long, realistic flights - so it was build and use one's imagination for the flying. However, if you want to cut construction time, here are some short cuts: 1) use foam (ugh!) for the wing, 2) duraluminum sheet for the landing gear, 3) aluminum motor mounts, or bolt engine direct to firewall, 4) buy or turn an alumi-num cowl, 5) buy plastic wheel pants, 6) use soft 1/4-sheet balsa for tail surfaces, 7) build the wing directly into fuselage (same with wing struts), 8) finish with plastic film covering. But don't send me a picture of it.

The author believes flying scale models should not only externally look like the real airplane, but be constructed like it - and fly like it also - at least as far as practical. The little .10 engine fit nicely into the cowl and gave plenty of power. The wing is removable for carrying and, in case of an accident during flying, held on with rubber bands. Removing the wing also gives access to the R/C equipment. The model may look over-designed, but it was intended to be strong and reliable same as the real Stinsons, and it is light enough to make an easy takeoff on a smooth surface. The first test flights can be made with the cowl, wheel pants, and wing struts all removed.

Construction is basic balsa wood structure - a boxy fuselage with the two sides built on the plan, then put together with cross members, then add bulkheads, stringers, and balsa fill here and there. Bend and bind to the plywood pieces the landing gear wires before installing the plywood parts. The hardwood motor mounts give the correct downthrust and absorbs much of the engine vibration. The cowl is a separate piece and is held to the front of the fuselage with short wood screws. Remember that the engine needs air circulation for cooling, so leave the air holes at the rear of the cowl and cut away enough of the cowl to clear the engine. Some scale models I've had with round cowls did have a cooling prob-lem, but this one worked okay.

The wheel pants are constructed so that they will slip down over the plywood pieces attached to the landing gear strut, and slide up and off just as easy. Take care in epoxying the parts to the LG wire, having the pants on and lined up properly..." 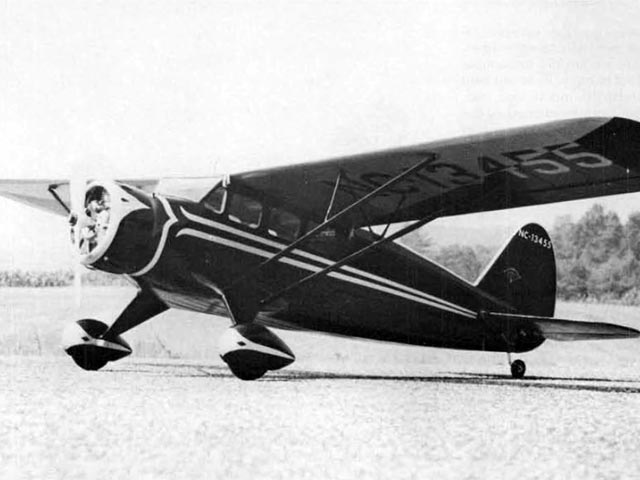