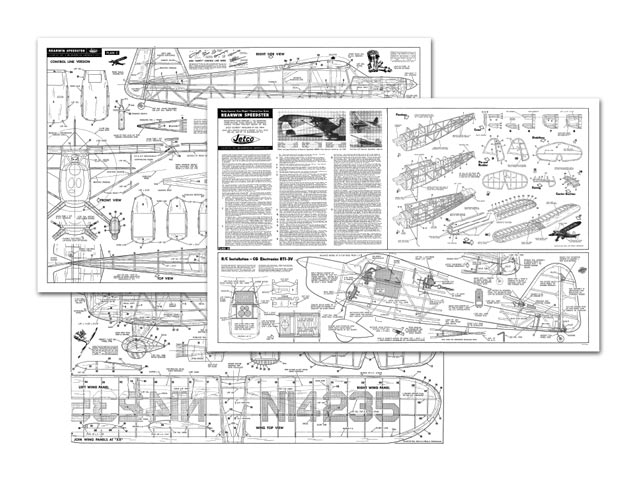 Rearwin Speedster. Scale model for RC, free flight or CL. Plan file contains sheet B and C, so it seems that sheet A is missing. Will turn up at some point, no doubt [fixed now, see below].

The Walt Mooney Rearwin Speedster (oz5455) design first appeared in March 1955 MAN as a free flight model. This here is how it appeared when kitted later by Jetco, sold as a '3-in-1' model that could be built as FF, CL or R/C.

Quote: "Hello! For all of the model builders, and myself. KUDOs for a wonderful site. This is my second contribution... in this case, the missing 'A' plans sheet for the Jetco Rearwin Speedster S-4 kit (oz4805). As soon as possible, I will get the die-cut sheets scanned, and submit those as well. Looks to be a great model for today's micro equipment. Many thanks!"

Introduced in 1935, the Rearwin Speedster will long be remembered as one of the most beautiful and perfectly proportioned airplanes ever built. Several examples are still flying in the States - one being registered as NC19415 (now flown without the wheel pants and with small end-plates fitted to the wing tips). The Speedster 6000 was powered by the 95 hp American Cirrus and the 1936-37 6000M had the 125 hp Menasco C-4 engine. Early 6000M's featured a larger rounded rudder (see photo of real plane), but this was later changed to the more attractive straight-trailing edge rudder (as on Jetco's model). Back in '37, you could fly away one of these luxurious custom-built craft for just $3,895!

Designed by Walt Mooney, this authentic replica was originally intended for Free Flight only (in which form it was published in the March '55 Model Airplane News), but this new Jetco version has been carefully modified to make it equally suitable for Controline (.09 - .19 engines) and R/C flying (.045 - .074 engines). In appreciation of their help and co-operation in connection with this model project, thanks are due to Gordon Codding, Peter Lewis, Ken Rearwin, Bob Taylor (Antique Airplane Association President) and Bill Winter (MAN Editor).

If you decide to build either the Free Flight or R/C version, you will not need the RED printed die-cut Sheet 7, but if you build the Controline version, you will need to use this red sheet and discard some of the parts from the remaining die-cut (BLUE) sheets. The Controline model has scale dihedral and a scale area all-sheet stabilizer - while the Free Flight or R/C model has increased dihedral and increased stab area. Details are provided for upright, inverted, beam and radial engine installations - and the width between the bearers may be increased to accomodate larger engines if desired.

BUILDING INSTRUCTIONS In accordance with the usual practice with advanced kits of this type, items such as the engine, prop, spinner, fuel tank, balloon wheels, belicrank, control horn, dope and cement etc, are not included. See the plans for details of extra items required. For best results, we suggest one of the many suitable K&B Allyn engines, but if you already hove another engine of the right size, this may of course be substituted.

Only a few tools are required - a balsa knife or single-edged razor blade, fine sandpaper, straight pins, Regular Ambroid cement, brushes and finishing materials, An old drawing board makes a fine working surface and wax paper placed over the plans will protect them from cement damage. All die-cut parts are numbered in the correct building sequence for 'Superspeed' assembly. The instructions refer to both the Free Flight and Controline versions, except for a few clearly noted stages where the Controline construction differs. Details of both types are shown on the plans, with Plan 'B' mainly covering the Free Flight version and Plan 'C' the Controline version.

The R/C version is basically similar to the Free Flight - with a few structural changes and additions - which ore fully detailed at the fact of this Plan 'A'. Read through the instructions and study the plans carefully (especially the sketches of the building stages on the right) before starting to build the model. Use pins to hold the ports in place over the plans during assembly.

FUSELAGE. Build up the two side frames over the pattern on Plan 'B', using 1/8 sq strip (choose hardest for longerons) and parts 1-4, making the second side over the first to ensure that they are identical. CONTROLINE version: Substitute A and B for 3 parts. When dry, re-move frames from the plan and carefully separate with a razor blade.

Begin the assembly by joining the side frames to formers 5 and 6. Build up former 7 (from parts 7, 7A and 7B), flat on plan. Add formers 7 and 8 and install the hardwood engine bearers in them (sidethrust is automatically built-in). Complete the bends in the tailwheel wire and sandwich it between the end posts (4) when joining the side frames at the rear. Check for correct basic fuselage alignment (in top and side views) before going any further.

Cement former 9 in place and join the wing supports 10 and 10A flat on plan. Install the wing supports, cementing them to formers 5,7 and 9. Add cabin cross piece 11 and rear fuselage former 12. Now cement the remaining top and bottom 13-16 formers in place. Lightly tack-cement stab fairing-former 17 to the rear face of top former 16. Bend over the ends of the rear formed landing gear wire and bind and solder to the main front landing gear. Fasten the landing gear, with the small metal plates and woodscrews provided, to plywood mount 18, then cement the complete assembly between the lower side longerons at the nose. Cement former 19 to the top rear face of former 9..."

Quote: "I finished this model recently. Before I started construction I scanned all the parts sheets, canopy, and the landing gear wires. This should provide close 100% of the information needed to build this model. Naming convention is the first number is the sheet, the second number is what of the sheet. Example, sheet 32 sheet three second part, sheet 31 sheet three first part. My model turned out well, and I will send pictures later on. Best Regards,"

Update 09/02/2021: Have made a minor correction in the formers zipfile, thanks to MikeH. As supplied in the kit, the printwood sheet #1 (ie scans BWSHT11, BWSHT12) was printed and labelled as being 1/6 thickness. This is actually 1/16. Fixed now. 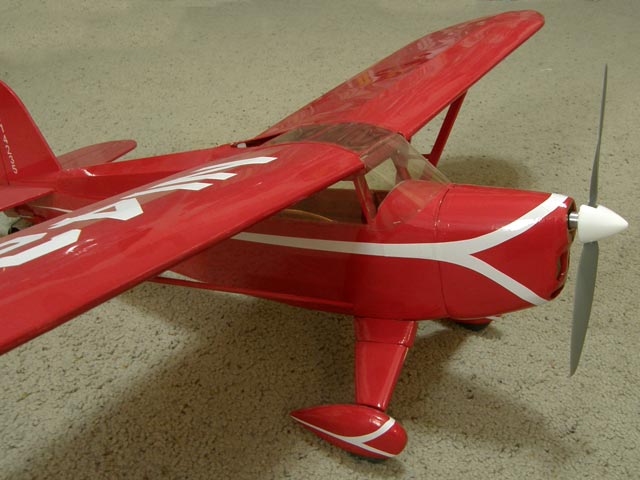 This model was designed as a kit in the late 1950s or early 1960s. There are no formed plastic parts. The plans and die cut sheets show everything needed to build this model. The die cutting is very accurate on this kit and it can build a very attractive model.
Here are pictures of my build [007-016]. I built mine for 3-channel electric radio control using modern equipment. The covering in Monokote, the stripes are cut adhesive backed white vinyl. The large numbers are white paper. I scanned the decals, reversed the image, put double sided tape on the reversed image, put wax paper over the tape and cut them out with a straight edge and an Xacto knife. The pictures show the stacked die cut parts used to make the cowl and the wheel pants [007-010]. The spinner is a Cox .049 spinner.
Mike Halbrook - 09/02/2021
Add a comment