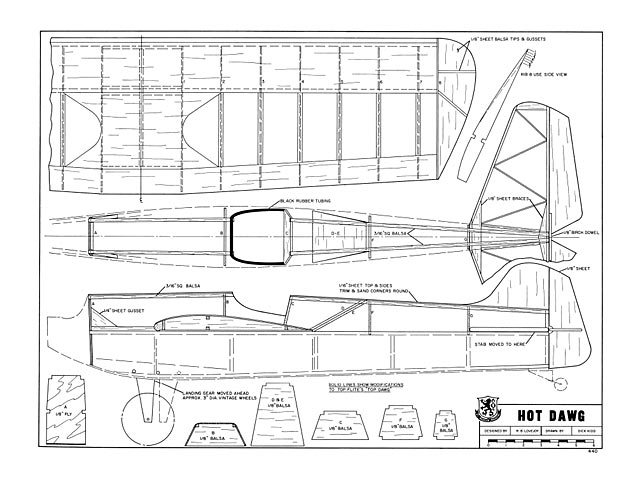 Quote: "Getting into quarter midget pylon racing is easy if you start with a proven design by Ken Willard kitted by Top Flite then modified to look like a vintage racer that will actually eat the competition alive around the pylons.

Here is a .15 powered quarter Midget racer with antique charm and sparkling performance that is built from a popular kit. The Top Flite Top Dawg (oz8897) was slightly modified to improve speed and maneuverability while at the same time getting appealing old-time look. Although the flat bottomed wing was maintained for fast, tight turns, the camber line has been flattened enough to enable inverted flying. Fuselage and tail surface changes are for appearance only.

The Hot Dawg has flown with both the Rand Dual Pack and small Orbit Digital proportional system. Loops, axial rolls, inverted flight and any combination of these maneuvers can be performed with R.E.M. on either system but the digital system has an understandable edge in reliability and performance.

Enough dialogue. Clear off your work bench and let's get started.

Wing. Cut the ribs to their new section, build the in as the plans instruct except for the trailing edge and capstrip pieces. For the wing-taper simply cut an inch off the wing tip rib, lay a straight edge between it and the first rib out from the root, cut off all the other ribs even with the straight edge and and each rib (top edge only) to a point maintaining a smooth airfoil. Now glue the trailing edge pieces and cap trip in place, Cut out and glue the wing tips and gussets in place. That wraps it up.

Stabilizer and rudder. Cut S-1 pieces to new outline, then cut out the 1/8 sheet braces. Assemble as the plans instruct. The same goes for the elevators, fin, and rudder after they have been cut to
their new shapes.

Fuselage. Steps 1 through 4 are followed without any changes except for relocating the stabilizer slot. Allow the bottom fuselage stringers to extend to the end of the fuselage. Cover this open section in step four when covering the bottom of the fuselage. Formers E (replaces F-15 of kit), F, and G should be cut out and glued to the fuselage in their respective locations. E leans against F. 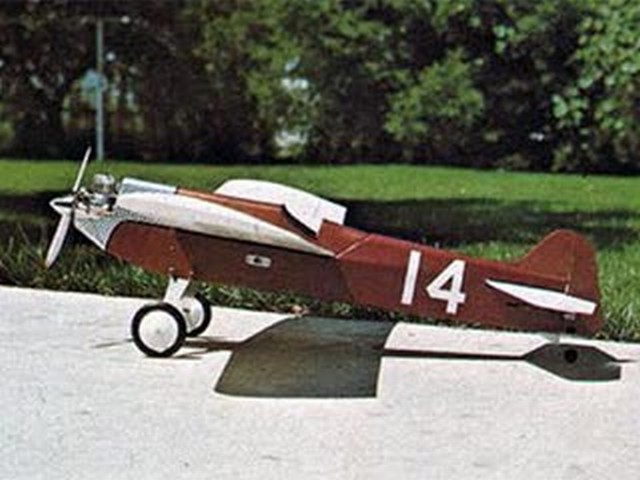