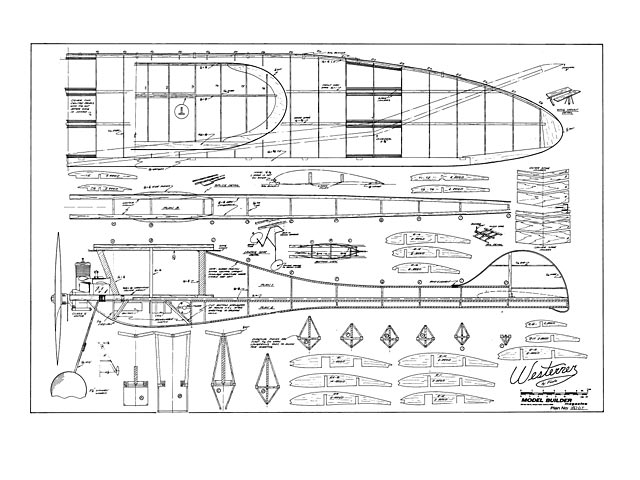 The Don Foote Westerner (oz11661) first appeared in Air Trails, August 1943. This here is a later redrawn plan and nostalgia article, from MB.

It is said over and over that you can't argue with success, and Don Foote's Westerner certainly had lots of it. Probably one of the last 'big' designs of pre -World War II days, it capped off a whole series of first place wins during the 1941 season by setting the AMA record for Class C ROG Open at a fall contest in Sacramento, California, with a three-flight average of 24 minutes, 37.8 seconds. And it seems that Bud Romak didn't always fly indoor, as he held the Class B ROW record with a smaller size Westerner.

For a long time, this writer had heard stories about the Westerner; of its soaring capabilities, of its awkward construction, of its tendency (probably if not built exactly right) toward wing flutter, and of the teeny-tiny vertical fin - but had not had a chance to study the plans.

Until a short time ago, we didn't even realize that the plans were right under our nose. When looking up designs for OT of the Month in our old magazine collection, we never searched much be-yond the 1942 issues, as the SAM cut-off date is December 1942. But lo and behold, a casual flip through the 1943 issues of Air Trails, and there it was, in August!

Going back to our opening statement that you can't argue with success, just look at that fin area. Whatever happened to the old saw about keeping the center of lateral area somewhere near or slightly behind the CG? This thing has to be like a dart with the feathers mounted on the point! Of course, the stab is big, and the tail moment is pretty long, but...

About that fuselage. To say that it gets all its strength from the 1/16 sheet covering had to be the modeling understatement of 1941! Even experienced model-ers would probably appreciate a hint or two on the building procedure. Start by building the crutch of 1/4-square hard balsa longerons and 1/8-square cross-pieces per Plan 3. Note that the crutch width is determined by the motor mount spacing to suit the engine you're going to use. Talk about early, total commitment!

Next you built the top and bottom center structures, using (oh mercy!) 1/8-square hard balsa, as shown in Plan 1 and Plan 2, being sure to center the 1/8 square on the 1/4 x 1/2 wing pylon pieces. With the crutch pinned down, center, align, and glue the top center structure to the crutch. Butt-glue the 114-inch sheet wing platform halves (with proper dihedral angle) to each side of the pylon beam (which should already have the wing hold-down wires bound and glued to it). Now glue the 1/4-square side pieces to the outside of the longe-ions, and then fit and glue the 1/4-square saddle supports in place... is this differ-ent or is this different!

Next come the slanted uprights that form the top half of the diamond-shaped fuselage. Get this - they are to be flush with the top 1/8-square longeron, but are set in 1/16-inch at the longerons, so the 1/16 sheet covering will come out flush with said longerons.

Now, and if you read this before beginning construction, you can complete and attach the 1/16-soft wire fin outline, having allowed the aft end of the crutch to extend beyond the edge of your building board (sure you did). As to how you build the stab and then mount it to the fuselage with the inverted T spar section neatly wedged under the fin post, according to the plans, rottsa ruck!

Although not called out on the original magazine drawing, the wing dihedral braces all appear to be cut from 1/4-inch sheet balsa. Rather than cut the center braces off sharp at the first rib out from the center, where the center section sheeting also stops, we'd suggest tapering off the stresses at this critical point by extending the braces out to the third rib from the center, tapering the brace material from full depth to zero through the outer two bays.

With those sturdy 3/4- and 1-inch depth spars, it doesn't seem likely that flutter could develop, but if you'd feel better, add 1/16 x 1/8 diagonal braces be-tween spars and rib bays in a Warren truss design. Maybe flutter only oc-curred in recent reproductions using heat-shrink film, which does not always develop the skin strength of tightly shrunk and doped tissue, silkspan, or silk.

Power climb is normally without a turn, and balance is 66 percent back from the wing leading edge at the center.

Guess well have to do the late Joe Weather's Westerner very soon, just to give it equal time." 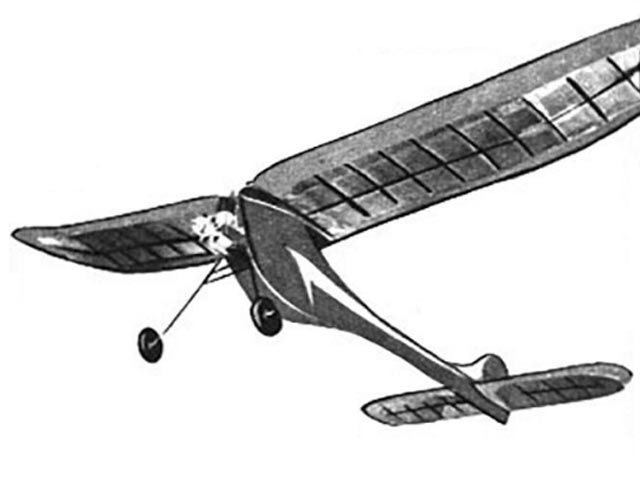