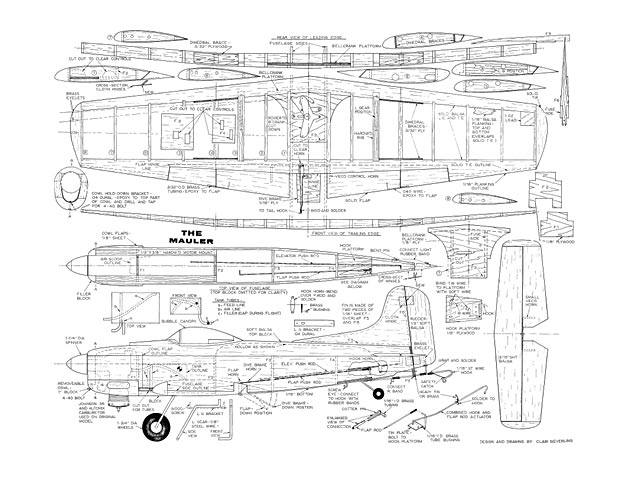 Quote: "What better way to get ready for the trend towards smaller Carrier planes than with this fine .35 powered winner. It can compete with the best of them. The Mauler, by Claire Sieverling.

This model was designed to consistently outperform the typical .35-powered carrier model in use today, and, with thorough experimentation in engine, fuel and props, to give the .60 jobs a run for their money. If properly built, it will do just that.

Now that I've stuck my neck out, let me go into details: Separate events for .35 class carrier models are becoming more popular in the Southwest and in other parts of the country. Since I already had a fairly successful .60-powered job for that class, I was too far addicted to the event to see all those .35 class trophies going to waste!

The first question was, 'What size model will be the most effective combination of smallness for speed, plus wing area for slow flight?' At this time, everyone was flying carrier model kits powered by .35's except Gene Cooper, a 'forge ahead' type who was flying a Netzeband Guardian and winning most of the contests. So it was pretty obvious that a ship with a span of around thirty inches would out-run the current kit jobs by 10 to 15 mph and still equal their low speed times.

The next question was 'What airplane has a higher ratio of wing to frontal area than the Guardian?' I also considered other factors such as moment arms, construction problems, potential flap areas, landing gear position, etc. I studied various planes and filled countless pages of scratch paper with wing area computations, sketches, etc., and was about to give up and build a Guardian when I started playing with the scale three views of the Mauler which are included in the J. Roberts Mauler kit. The more I doodled, the more excited I became, and soon I had roughed-out three views which were just the right size. Much to my surprise, and Cooper's, the ratio of wing area to frontal area was higher than the Guardian! Generous flap area was available, a kick over rudder could be used; the design was looking better all the time.

The last problem was to design the construction features. Being somewhat of a pessimist, and a little lazy at the work bench, I could anticipate all kinds of problems in getting this model off the drawing board and into the air. Once again I was pleasantly surprised. The thing fell together like a simple stunt job; the scale fuselage width just happened to exactly match the Johnson crankcase plus standard 3/8 motor mounts and 1/2 in sides, etc. So I ended up with a model blown up three times from the scale views included in the J Roberts kit. The five percent tolerance allowed in the rule book was used in several places (such as control surfaces) to improve performance, so stay within the lines on the drawing when building the model. I have never been to a carrier contest in which there was any shortage of Mauler three views so you should have no trouble supporting your claim of scale dimensions.

Now you're wondering what the performance was, after all this 'high level' engineering work! First, let me set the stage: As many of you know, I concentrate on stunt flying and make no claims to fame as an engine performance expert; carrier flying is a diversion from my stunt flying and my carrier practice amounts to flying once or twice just before a contest, flying my official flight, and then hanging the model up until the next contest. I do very little experimenting with props, fuel and engines for two good reasons: (1) my stunt flying doesn't leave me time to experiment, and (2) I'm lost when I try to make an engine do anything but four cycle contentedly and 'squeak' in the turns!

Now that the ground rules are laid, here is what my Mauler is equipped with: a new (and still tight!) Johnson Stunt Supreme which was unemployed at the time, fitted with the Johnson throttle, and 8-8 Top Flite prop, Missile Mist fuel and braided cable (three lines) of regulation length and diameter. With this equipment, the model will do between 80 and 85 mph for the high speed laps and 22 to 25 mph for the low speed laps..." 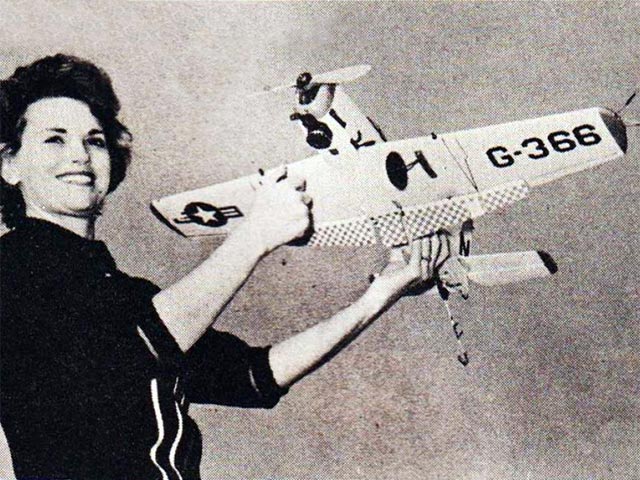