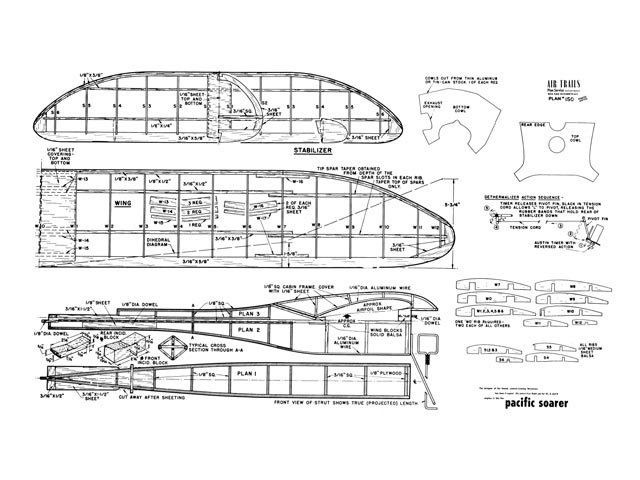 Quote: "The designer of the famed contest winning 'Westerner' has done it again! His latest free flight job for class A and B engines is this fine 'Pacific Soarer'.

Don Foote of Oakland, Calif has a distinguished career as a free Flight model designer and has served as chairman of the Academy of Model Aeronautics' free flight committee since the end of the war. Mr. Poole's designs have won American, British and Australian competition honors.

THE midwing design of the Soarer was not a goal in itself. It came about as the result of attempting to combine extremely high speed in the climb of a free-flight model with super soaring ability.

Several ships of this same general layout but of varying sizes and modifications in design have been built and flown. The results have been far better than anticipated. In this particular version the speed of the climb has been decreased slightly in order to attain a maximum of stability. But the airplane's great soaring characteristics remain unchanged. The result, therefore, is a high-performance contest job. It has an average climbing speed, is highly stable and resistant to spiral dives, and has super soaring qualities that enable it to ride even the smallest of thermals - important attributes in free flight competition.

The motor in my Soarer is a Bantam 19. The ship will take any Class A engine. It will also take an Ohlsson 23 or Glo Torp 24 if the flyer prefers a Class B ship. It is plenty large enough to handle these engines nicely.

There is space enough in the cabin for batteries and coil if ignition is preferred. Yet the fuselage cross section is no larger than is required to streamline the engine in a graceful cowling. A dethermalizer design is given as an alternative and its use is strongly recommended.

Although the wing is set below the top of the fuselage, it is designed with a removable upper cabin so that the wing can fly off on impact to lessen damage.

The clean, flowing lines are not only an aid, to performance, but give the Soarer a beauty of appearance equalled by very few ships. It is one of those rare airplanes that combine streamlined beauty, maximum stability, and super contest performance.

The shaded portions only of Plan 1, Plan 2, and Plan 3 are built flat on the board. When dry, Plan 2 section is removed and cemented in a vertical position along the center line of Plan 1 to form a keel for building the lower half of the fuselage in an inverted position. The diagonals are inserted as shown in the cross-section view.

The front of the cabin is rectangular in cross section. Aluminum rod is used to form the curves for flaring out the fuselage from a triangular cross section to rectangular. It is easier to fasten the rod to the keel by wrapping it with thread as well as cementing it. The entire lower half of the fuselage is sheeted with 1/16 balsa and allowed to dry..." 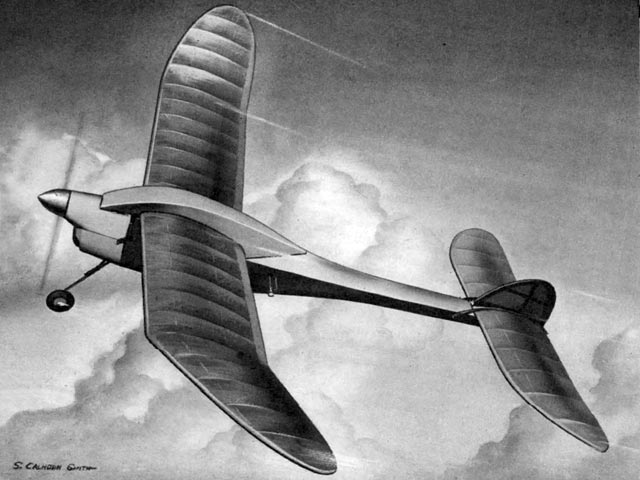