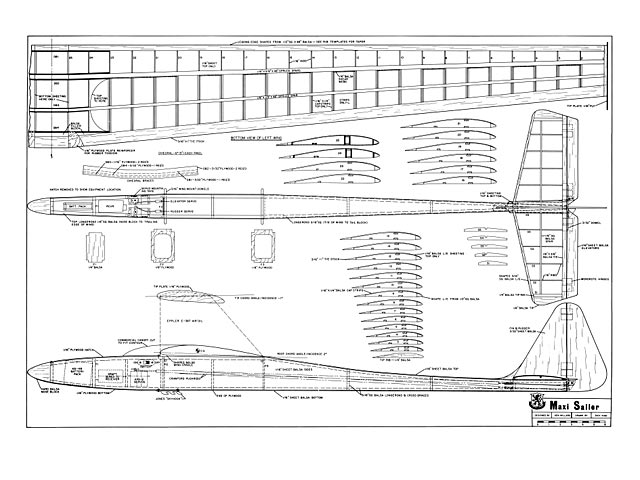 Quote: "The MaxiSailer is a competition thermal soaring sailplane. It is easy to fly - but hard to fly well. With the lifting stab, and the CG further back than most sailplanes, it will pick up any light lifting thermal. But if you're not ready for it, the MaxiSailer will fall off from the delicate setting and drop ten feet before you can recover. If you are ready for it, it will go up in a small thermal that other sailplanes can hardly feel. And, because of the light weight, the turning radius allows you to keep it inside the thermal. The Eppler 387 airfoil is normally considered to be a compromise section, good for slope soaring and thermal flying. It has proven itself in both elements; the wing of the MaxiSailer is the same wing that I used on the 'Led Nalivag' in the R/C Modeler Trophy races last spring.

The design philosophy of the MaxiSailer is simple. I wanted a very light sailplane, with a long tail moment, and a wing section that would thermal well, but also would penetrate the wind if necessary. And, from a practical viewpoint, I wanted to build it from four foot wood stock which is available from most dealers.

A look at the plans will immediately show you that there is nothing unusual in the construction of the fuselage and the tail surfaces. It's a standard slab-sider design, and goes together very quickly. The stab is glued right to the top of the top longerons. Incidentally, you'll note that the center sheeting is not inset; just added right on to the top and bottom of the center ribs. This isn't quite as streamlined as it would be if inset, but it's stronger. And covering it with MonoKote makes it easy to get a smooth transition from the stab surface when you shrink the Monolkote in place.

The fin is cut so that it extends down to the bottom sheeting of the stab. A slot for the spar aligns it fore and aft, and a slot in the top of the center section sheet covering lets the fin slide down into the stab between the two center ribs, which are spaced 3/32 in apart to make a socket into which the bottom of the fin will fit. Now those are about the only details on the fuselage and tail surfaces that might need explaining. Most of you who plan to build this job will probably have your own favorite modification anyway... " 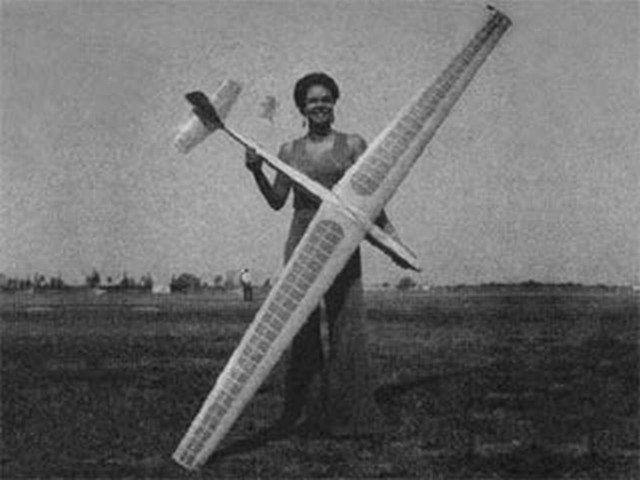