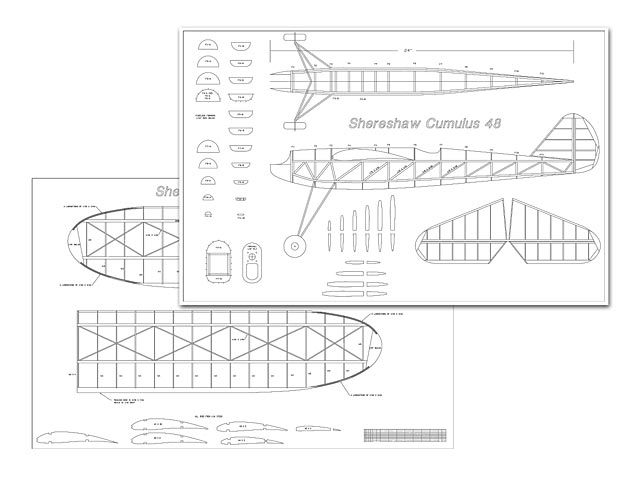 This is a modern re-drawn plan.

Published in 1937, the original Ben Shereshaw Cumulus (oz5363) free flight design was first seen in Flying Aces. This here is a later redrawing for radio control and electric.

Quote: "I've spent the last couple of days with the magazine plan and article on the Shereshaw Cumulus. With the copying over the years and who knows what else, plus the necessary small scale, simply blowing it up wouldn't do. So I set about drawing something up that I could cut out the parts and be reasonably sure that they would fit. I fully expect a surprise or two, but there shouldn't be anything major.

I drew this at 48 in wingspan because that's what I intend to build, but the original was 96 in. I also made the changes needed to make it electric. It's an easy thing to double the size if you need to.

There are also things like the dihedral brace and spar bracing that is not drawn here. Anyone wanting to build one (with this plan or another) should absolutely read the magazine article. There are a lot of things explained there that are not obvious on the plan."

Additional version of the plan in PDFvector format. Note the scaling is wrong on this one. Quote: "One thing, though, in the conversion from cad to pdf, wingspan went from 48in to close to 52in. If there is someone here who knows how to fix this and has the time to do it, then please do."

Hi, guys, thank you for this terrific site , keep up the great work! One little detail, firewall former view (F1) is longer than the dimension shown on the side plan view, thanks again and best regards
Ian W - 14/04/2019
Add a comment