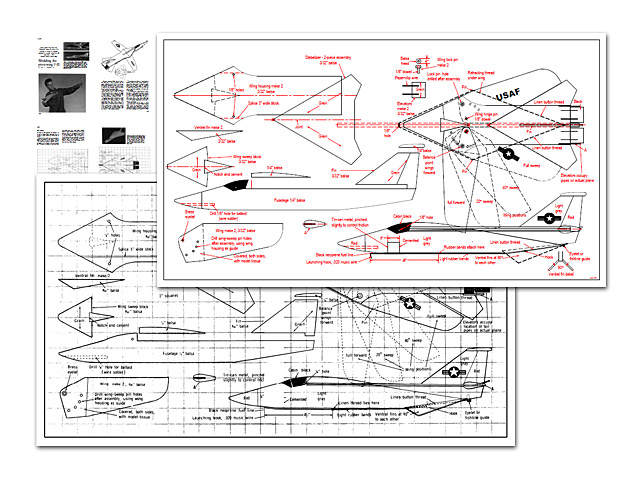 Quote: "REALISTIC ZOOMING flights that end with a slow glide back to earth are possible with this unique 'silhouette' model of the F-111, the new multi-purpose warplane in service with the U.S. Air Force and the U.S. Navy. Its wings are built to extend for slow hovering, landing and taking off and to retract for supersonic flight.

Not only does this model slowly extend its variable, delta-like wings in flight (the reverse of the actual plane) but its wings can be locked at various angles of sweep to determine the effect at various speeds. It's quite considerable - the more wing backsweep, the higher the speed.

The wing-sweep retracting mechanism is simple and effective. Here's how it works: The wings are drawn back to a full-swept position by strong button-thread lines which attach to pins in the leading edges of the wings, and pass through an eyelet at the rear of the tail, then on to the eye of the launching hook. A rubber band, attached to the same wing pins and passed through a hole in the fuselage at the end of the cockpit, pulls the wings to a fully extended position.

The launching wire slides in a short length of neoprene model gas line. Friction between the wire and the tubing, which is adjusted by gently pinching the tin holder, causes the launching wire to retract slowly when pulled by a second set of rubber bands attached to the eye of the wire and to a small hook embedded in the lower edge of the fuselage.

The launching wire is pulled forward to retract the wings to a full swept-back position and then the plane is catapulted by a sling shot consisting of a loop of 1/4-in. model-airplane rubber tied to the end of a dowel handle. When the plane is aloft and the hook is being slowly pulled back by its rubber band, the wings spread to full width in 3 to 5 seconds. Proper drag on the wire is found by experiment.

To fly the model with the wings in a fixed sweep, dowel pins are inserted through aligning holes in wings and wing housings to lock them at the desired angle. Flight trim is secured by adjusting the elevator tabs..."

Update 19/07/2015: Replaced this plan with a clearer copy (single sheet, stitched) thanks to Circlip. 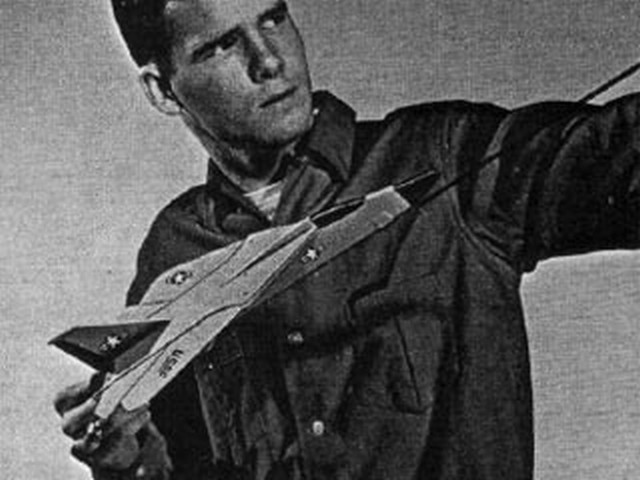 Hi Steve, I saw the above named file you posted on RCG this morning and it looked like an interesting small project... To the point... loaded them into my CAD program thinking it was going to be an easy go to clean it up. Well, it turned out to be a bit harder than I anticipated. No two pieces on the page you posted were the same, and I couldn't make the parts fit. So, I retraced and fit all the pieces and I think I've got a pretty good clean copy now. I tried to stay sensitive to the original draftsman's plan as much as possible, but did correct all the errors I found... I think I figured out that blank area... finally read the text (dummy here should have read the article first...lol) and I think it's sort of sorted out. Changes and additions made, also added small date in lower right hand corner. PDF attached, share as you like. If anyone finds corrections that need to be made, will be happy to do so. Want to thank you for the great plan site you offer....hope all is well with you and yours, Don
Don - 19/07/2015
Add a comment