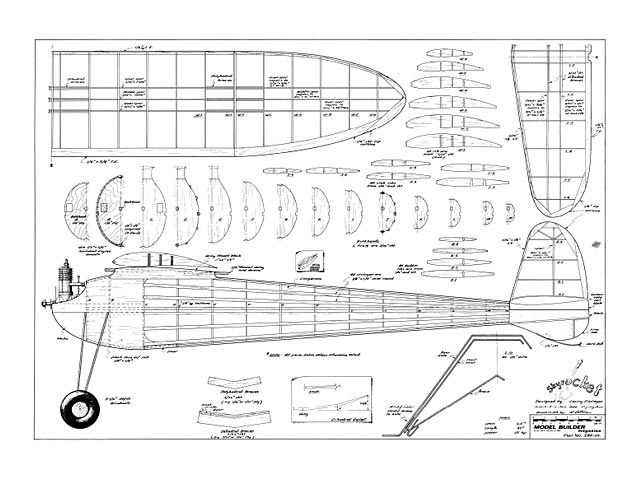 Larry Eisinger's Skyrocket, from the January 1940 issue of Flying Aces, is another of those oldies that looks like a winner, yet is very seldom (if ever) seen on the OT contest circuit nowadays. In fact, after eight years or so of active OT flying, first with F/F and then R/C, I've never once come across one of these ships, not even in a photo - a real puzzler, as the Skyrocket does look like it could be made to fly with the best of the OT's now being flown in competition.

Eisinger's Skyrocket was powered with a Brown Jr, which is actually a lot of power for a model this size (62 in span, 500 sq in), so the wing was designed with plenty of dihedral and the tail moment was made extra long to keep the power pattern under control. (Even the stab has some dihedral, a trick intended 'to make the model more stable.' You figure it out!)

The wing features an RAF 32 airfoil, chosen because of its good flight performance and also because it is thick enough to accommodate a nice, deep spar. And not just one spar, either, but three of 'em, grouped closely together and located more in the center of the wing chord than towards the LE, as is usually seen.

The fuselage has an elliptical cross-section with 12 half-rounded stringers around its perimeter. This type of structure is usually a bit of a pain, but is made somewhat easier in this case by the fact that everything is a straight line aft of the wing TE, making it easy to get the stringers lined up properly. Also, note that the bulkheads have a 1/4-in square hole in the center. The construction sequence called for the bulkheads to be glued to a piece of soft 1/4 sq, then the top, bottom, and side longerons (1/8 x 1/4) were to be added, and finally the stringers. just how straight a piece of soft 1/4 sq is going to hold everything while you glue on the sticks, is hard to say. A more accurate and easier way to do it would be to make a crutch, glue the bulkheads to it, then add the stringers. A crutch certainly is not going to bend and twist like a single stick would.

For Old Timer events, the Skyrocket has to weigh at least 28 oz. to meet the wing loading requirement in both F/F and R/C. Also, for R/C, a .22 is the biggest engine allowed. Either way you make it, the balance point specified in the original text is at 38%, or 3-1/2 inches aft of the wing LE." 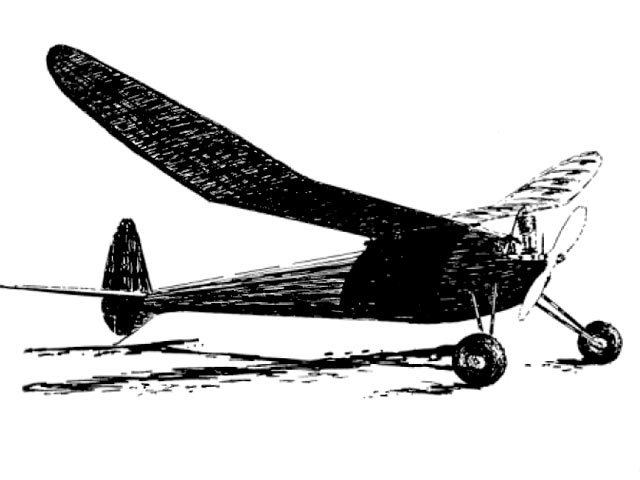