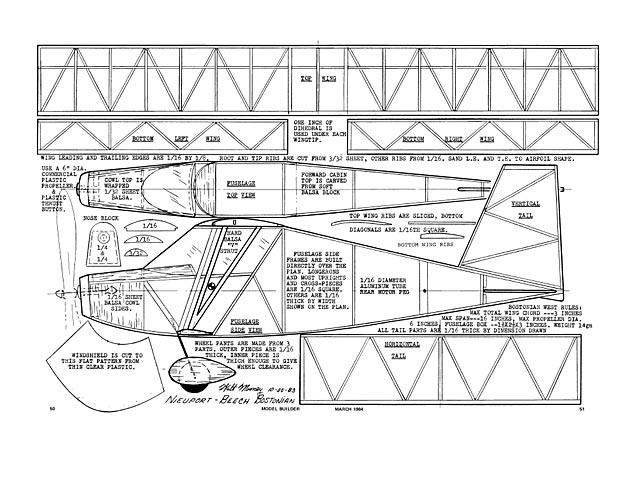 Quote: "This model was unnamed until after several people had seen it fly up at the Mile Square flying site in the Los Angeles area. I don't know who came up with the name but the concensus was that it looked a little like a Nieuport and a little like a Beech, hence the name.

The required fuselage box for Bostonian is 1-1/2 x 2-1/2 x 3 inches. In this model it was placed with the long dimension vertical because a large gap between the wings was thought desir-able.

The first vertical tail designed turned out to be too small, so a larger one was designed and proves to be just right. (I note that I installed the new vertical on my model backwards so that the trailing edge is where the leading edge was meant to be. As a result, the tip slants. I would like it better the way it is drawn, but its flying characteristics won't change, and it is cemented on securely, so.

Diagonal rib structure was used for the flying surfaces to eliminate the tendency for warps to develop and has worked quite well. Except for this structural characteristic, the model follows very standard construction methods. The tail surfaces are one-sixteenths of an inch thick and are built directly over the plan. When they are dry, remove them from the plan and sand the leading and trailing edges half round. Cover both sides of the tail surfaces with Japanese tissue.

The tip ribs and the root ribs of the wings are shown on the side view of the fuselage. Cut these from firm 3/32 sheet balsa.

The bottom wings each require seven diagonal ribs of 1/16 sheet balsa which are cut to match the pattern shown just forward of the vertical tail. They also require one straight rib out from the same stock.

The top wings are constructed a little differently from the bottom wings. I use the sliced rib technique, and all the sliced upper rib caps are glued in straight ahead. There are 1/16 square bottom caps which are also straight ahead beneath all the top caps. In addition, 1/16 square diagonals are used be-tween the leading and trailing edges of adjacent ribs. Also the top wing has a 1/16 by 1/8 spar..." 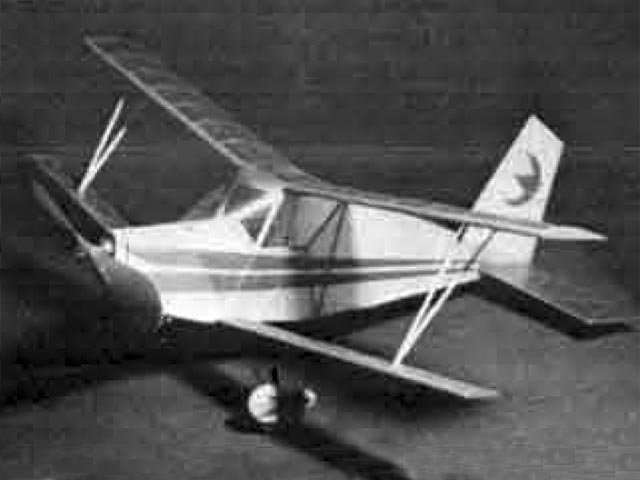