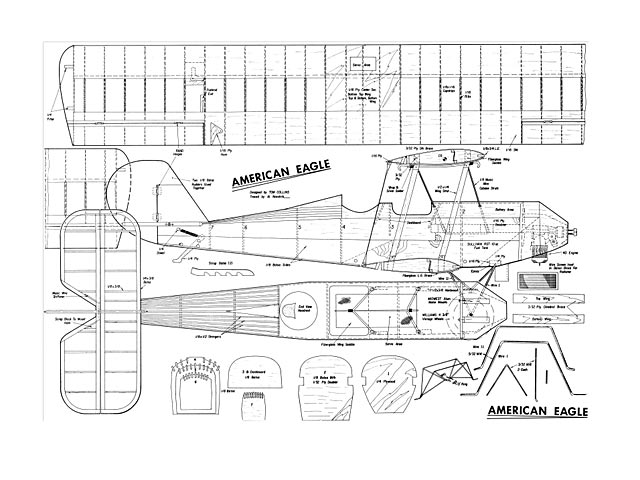 Quote: "For tight-sized flying fields, a bipe's the way to go. Try this scale classic from the 1929 era. A good ship!

The American Eagle Aircraft Corporation was founded in December, 1925, in Kansas City, Missouri. The president and general manager was the well-known Ed E Porterfield, later known for the series of light sport aircraft bearing his name, which were produced during the middle 1930's.

The American Eagle was one of the first of the new production breed of light commercial biplanes built in the decade immediately following World War I. Introduced in 1926, a number of models were produced in varying numbers before declining sales brought production to a halt in late 1931. The majority of these ships were biplanes, although a four-place cabin monoplane and a light two-place parasol monoplane, the American Eaglet, were also produced. Three distinct series of biplanes formed the backbone of the American Eagle production lineup; these bore a number of designations according to the engine fitted or, in the case of the A 129, the year in which it was produced. Lindberg's historic flight in 1927 caused a boom in the aircraft industry, with the American Eagle Corporation rising to third place in commercial aircraft production.

This particular model is the A 129 with the Curtiss OX-5 engine. The Eagle has a nice clean look which immediately sets it apart from the cumbersome Jennys and clipped-wing Standards, which were then in use.

When you take the Eagle to the flying field, that's when she'll came into her own. When you start her up and start to taxi down the strip, you will realize that this biplane is different. For an airplane with conventional gear and a tailskid, she taxis like a Taurus (oz612). Ground handling is excellent. We fly from a grass field and when I saw the Eagle taxi around in a 10 foot figure eight, I knew there was something special about her. The center of gravity places just the right amount of weight on the tailskid to keep the tail down, but not enough to make the tail drag deeply in the grass. With the use of a tailskid, the rudder is the only effective means of turning, and the Eagle makes the best use of it with no tendency to groundloop.

When ready for your first flight, taxi to the end of the runway and point her into the wind. Advance the throttle slowly and apply a slight amount of right rudder. This is to discourage a left turn tendency in short coupled aircraft. Relax the rudder as you pick up speed. Knowing that the plane will veer to the left, it is easier to start off with a little right rudder and ease up as you gain speed, rather than making a correction after the plane has started a left turn. Never, under any circumstances, pull the stick back. This airplane will naturally take to the air with a little up trim..." 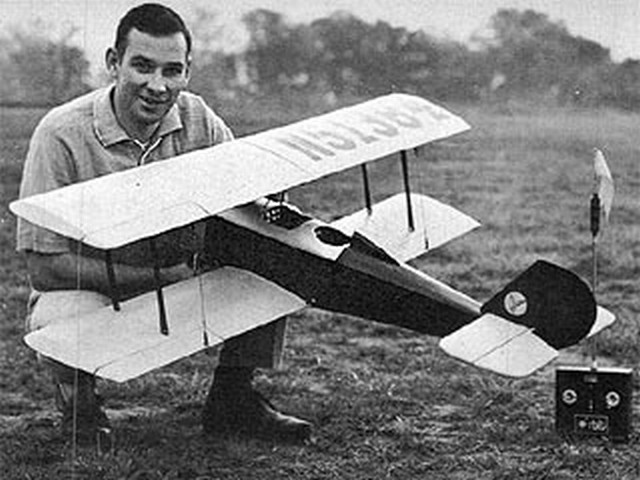