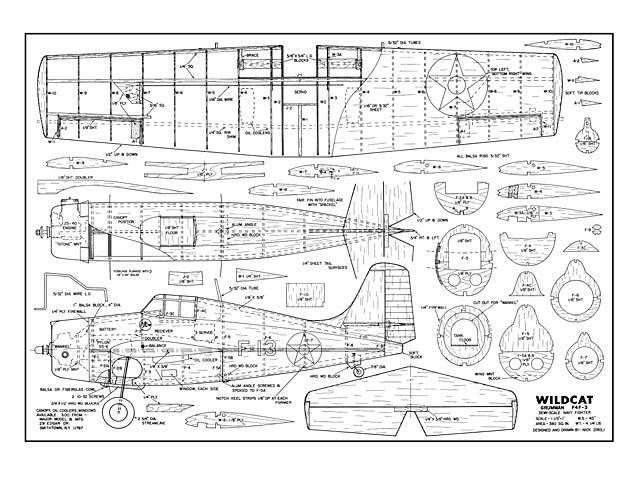 Quote: "Wankel in a Wildcat, by Nick Ziroli. An OS Wankel .30 in a semi-scale R/C replica of the Navy's carrier based Grumman F4F-3 Wildcat fighter. Might be fun to drop a hook for arrested landings.

We can thank the Japanese for the development of the Grumman Wildcat. Their success with the A5M monoplane operating off aircraft carriers opened many eyes. This was at a time when the US Navy and in fact all operational naval fighters were biplanes. The Navy had evaluated experimental monoplanes as early as 1934, but found the biplanes better suited to carrier operation. Late in 1937 the Douglas TBD went into service as our first operational shipboard monoplane, a torpedo bomber. In 1936 Grumman was working on the design of a new biplane fighter to supersede the F3F. This was the F4F and also a biplane. However, when Brewster was awarded a development contract for their new Buffalo monoplane. Grumman re-designed the F4F-1 biplane into the F4F-2 monoplane. It first flew in 1937 and performance was in general inferior to the Buffalo. Brewster received an order for fifty four planes. In 1939 nine Buffalos went aboard the Saratoga to become our first shipboard monoplane fighters.

Meanwhile. Grumman made many changes to the F4F-2 which brought it up to the F4F-3 design version shown here. A power increase and larger square tipped wing and tail surfaces were two major mod ifications that were made. Further suc-cessful tests. plus operational problems with the Buffalo gave cause for the Navy to award Grumman a contract for seventy eight F4F-3's. Export models were also sent to France and England. At the outbreak of WWII the Wildcat was the first line fighter of the Navy. Although its performance generally was not as good as the Zero, its superior armament, rugged construction and skilled pilots made it a formidable fighting machine. Wildcats were produced by Grumman until May 1943. during which time 1,971 were built. General Motors took over production at this time producing 5,276 more, the FM-1 and FM-2 versions, Production ceased in August 1945.

This model is patterned after the plane Lt. Butch O'Hare flew. He received the Medal of Honor for shooting down five twin engine Betty's and damaging a sixth in one air battle. I've always liked the Wildcat and think of it as the classic Navy fighter. As an R/C model though I've always passed it over as being a little too bulbous to be practical. I did do a Controlline profile of the aircraft about ten years ago Grumman Wildcat (oz9634) that was published here in Flying Models, my first article.

What got me going on the Wildcat this time was the O.S. Wankel engine. It's unique circular shape lends itself to cowling in a plane with a radial type engine. A friend Carlo Massulu, who built the F4F-3 in the early color scheme. and I went over three views of a lot of planes before it was decided we would build the aircraft. Thus the thought of a small light weight Wildcat that would really perform with the Wankel came to be. 1Ihad been flying the Wankel in a larger airplane, just to find out what to expect from it. I found it a delight to operate, with the one exception that the needle valve seems a little overly sensitive...

The model is approximately 1/1-th size. The span was increased to 45in and the chord accordingly enlarged. Also the stab area was increased. The fuselage is as close to scale as could be drawn by measuring off a smaller 3-view. In spite of the enlraged wing, it looks right.

Performance can be described as lively. It is fast and maneouverable, yet stable at slow speeds. This is due to the generous washout in the wings and a well forward CG. Planked fuselage construction may seem a bit old-fashioned for 1972, but I have not found a faster way to build a light weight round fuselage..." 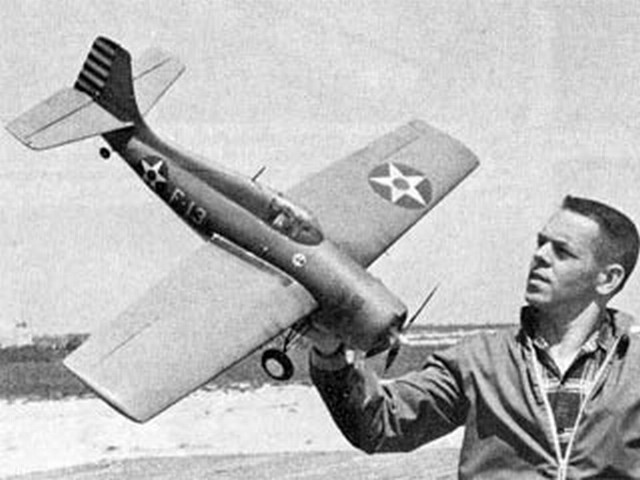