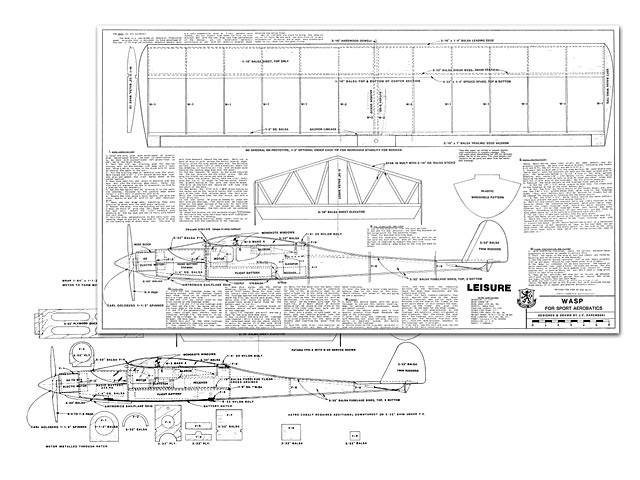 The Wasp has been designed around the new breed of high power electric motors sold by Astro Flight, and Leisure Electronics. These systems, generically called '05' are powered by six, seven, or eight cells of 1.2 AH capacity. The rpm's, duration, weight, etc vary with each system. However, you can expect high power for five to nine minutes with these systems which, when coupled with a low drag high performance aircraft, can lead to spectacular acrobatic performance on par with anything electric in the world today.

When I fly, I try to take advantage of every minute at the airfield. The more
flights the better. A number of electric fliers have been charging two or more battery packs prior to going to the flying site to similarly optimize flying time. The basic idea is to charge one battery while you fly on another. This can be taken a step further. If you had, say, four to six packs pre-charged and could quickly change the batteries in your model, lunch time and those short evening hours could be fully utilized for electric Eying.

With the idea of a fast, of acrobatic model in mind, I sat down at the drawing board trying to figure out how to design a quick change battery-feature into a sport aerobatic model. A lot of ideas were analyzed, but the use of a simple ventilated plywood hatch on the bottom of the fuselage proved to be the best approach. This is certainly not a new approach. I recall seeing this type of hatch on several of Mr Mabuchi's electric models in the modeling press back in the mid-seventies.

It occurred to me that I'd probably break off the fin sooner or later if I tried to to the model upside down in the grass to change the battery pack. Just about this time, I thumbed through a general aviation periodical and saw a picture of a Short Skyvan, and immediately began to think in terms of twin rudders. With a pair of twin rudders, the model could be turned upside down in the grass for battery changing. Since the top of the rudders don't touch the ground, they won't get broken. They are also very striking in the air and lend a certain distinction to the Wasp.

I personally feel that a high wing planform is best suited for electronic models. A model should look like an airplane. There should be a windshield, windows, etc. Of course, it also has to be as drag-free as possible, and should weigh as little as possible.

The Wasp meets these design criteria and can be quickly built with a ready-to-fly aircraft weight of 8 ounces, not including the radio and electric flight system. It uses the NACA 2410 airfoil which is a 10% version of the well-known 2412. The wing loading is 15 to 16 oz per square foot, which results in excellent gliding ability.

Prototypes have been flown with both Leisure's pattern and racing motors, the Astro XL 05, and Astro Flight's Samarium Cobalt Challenger 05. The number of cells was varied from six to eight Sanyos of the 1.2 AH size. As with all electrics, the compromise is duration versus speed. I personally feel that seven cells is the best compromise fur either the Cob-alt 05 with a 7/6 prop or the Leisure 05 with a 6/4 prop.

What can you expect in the air? With the Astro Cobalt Challenger 05, the Wasp jumps away from your hand air you toss it into the wind. It'll climb at 40 degrees and can fly out of sight in a few minutes if you continue to ciimb. However, if you keep the Wasp trimmed neutrally on the elevator, shell go where you point her. Snap rolls or long smooth rolls are easily mastered. The Wasp flies inverted just as well as it does right side up. It'll do inside loops of 100 ft diameter or more with ease. Outside loops are also possible if you build up the airspeed. It'll fly for five or six minutes before the power noticeably drops.

That's the real advantage of the 1.2 AH cells. The power stays there until the end of the flight when the rpm's finally diminish quickly. With some of the older systems using .55 AH cells, power continuaiiy dropped off after only a couple of minutes. With the Wasp, you can do the same aerobatics the last minute of the flight as you did when you launched.

Once the power is off, the Wasp has a surprisingly flat glide. It doesn't have a tendency to stall, so you can pull back an the elevator to slow her down for a smooth landing. This ship is relatively clean. It penetrates very well. In fact, fly it in winds up to 25 mph , The first flights with the Challenger 05 were made in California in May of 1982 in high winds. The Wasp handled these winds with ease..."

Quote: "I dug up my issue of RCM that featured the Wasp and scanned the fuselage section of the plans with the formers. Pretty simple stuff. I inserted the scan into Autocad and scaled the image then printed it to PDF." 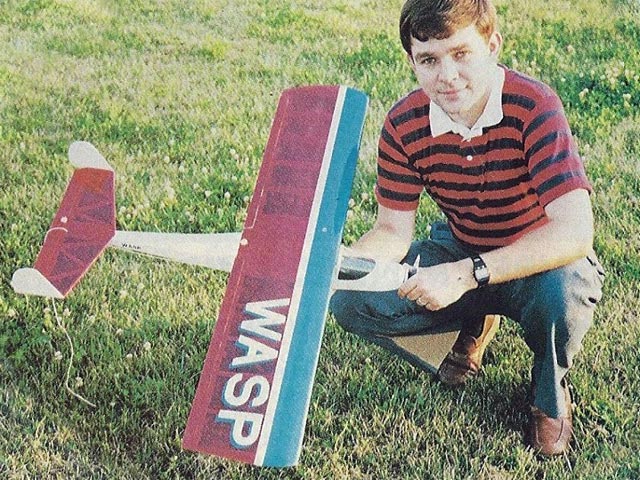