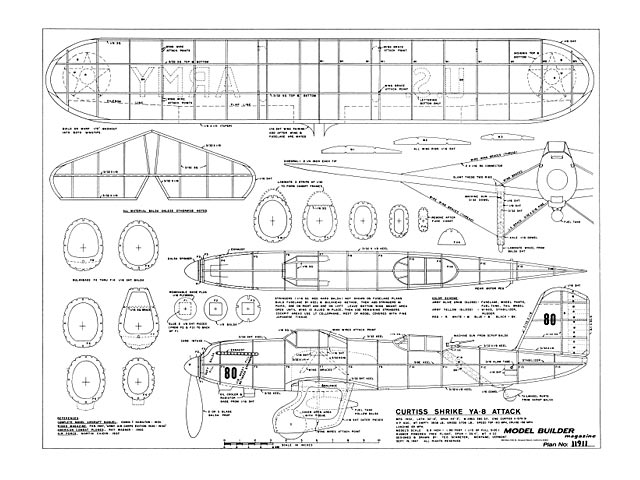 Quote: "The Curtiss Shrike VA-8 was designed in the early 1930's to meet the US Army's need for an attack aircraft capable of close ground support, light bombing and observation. The aircraft was developed around the favored Curtiss 600 hp Conqueror in-line, liquid-cooled engine which produced a slim, streamlined 183 mph aircraft. But the Conqueror engine was plagued with chronic cooling problems and large maintenance costs. So Curtiss decided to re-engine the VA-8 with an air-cooled 625 hp P&W radial and upped the designation to the VA-12 Shrike, an aircraft that proved popular with the Army and the pilots who flew it, However, the YA-8 makes a better looking model.

For those of us who grew up in the 30's and 40's there is a special fascination with the planes of that era, especially the military aircraft. Nations readying for war, rapid progress in aircraft design, and memories of seeing those planes as pictured in the media of those days all combine to motivate us to recreate these old warbirds as models.

The Shrike was one of many models on the "must build- list... a list that most scale modelers have, written or unwritten. It was first made as a Peanut Scale with 13 inch span and 14 gram weight. A smooth flying little gnat, but with limited duration and a peculiar habit of climbing up about six feet, hesitating and making a slight turn to the left, and then going off in a beeline to land just as the winds ran out. One thing learned was that if those big wheel pants weren't positioned exactly straight ahead. the model wouldn't fly worth a darn.

By enlarging the plans to a wingspan of almost 36 inches, a more workable and detailed model was possible. The big model is also very steady in flight, and moves in wide circles to the left. Build light and pack in the rubber and see the performance go up. Incidentally. the Shrike would make a great radio-controlled scale model.

FUSELAGE: Cut out bulkheads from medium hard sheet balsa, cut out side keels from 3/32 sheet balsa, and the top and bottom keel pieces. Position bulkheads on side keels, then add top and bottom keels. Add 1/16 sq stringers in pairs, beginning next to Ilse side keel, making sure to keep the fuselage straight Leave the wing bay open. Between F3 and F4, glue in soft pieces of 1/4-inch sheet or similar, carve to shape, and sand. Between F4 and F5, fill the spaces between the stringers with soft 1/16 sheet balsa. Add the 1/16 sheet pieces to support the wire wing braces, the solid wing braces, and the rear motor peg.

Cockpit canopy supports are 1/16 sq balsa for front, and 1/32 laminated balsa strips for the rear cockpit. Later these supports can be covered with thin cellophane. When the fuselage is completed, use fine sandpaper to smooth the structure and to slightly scallop the bulkheads between the stringers, so the tissue doesn't bump-up on the bulkheads. Details Ssuch as the exhaust stack line, radiator, oil cooler, and fuel tank are made from scrap balsa and added to the fuselage just before painting.

WING: Cut out all ribs and lay down the two 3/32 sq spars on the plan and glue in the ribs except for the center rib. Slightly slant the two ribs that bracket the landing gear, so the pants fit in nicely. Glue in the 1/8 sq leading edge and the 1/8 x 1/4 trailing edge, and add the wing tips and the top spars..." 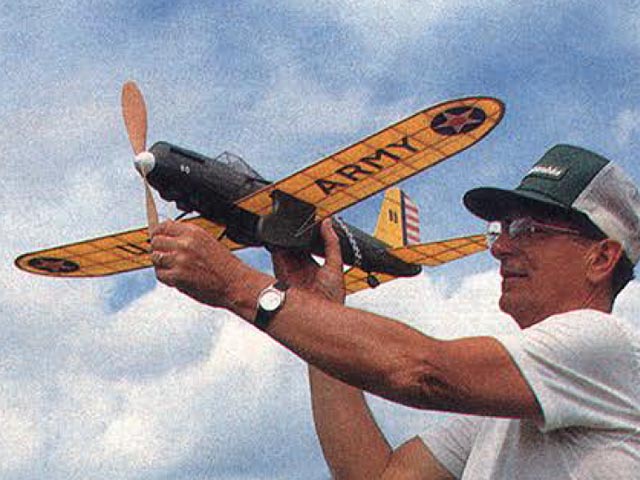