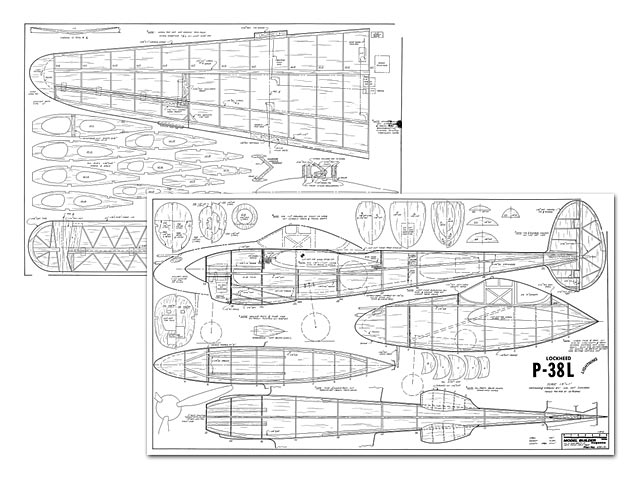 Quote: "The P-38 is a legend in itself, and the author's accurately outlined R/C Sport Scale model of this great fighting machine is just as exciting ... to see and to hear. Why not pilot your own? P-38 Lightning, by Col Art Johnson.

The most beautiful airplane ever built? I thought so when I first saw the sun reflecting from the twin booms of a P-38 high over Southern California. It was early 1941, and Lockheed had not yet started painting the big twin fighter in the dull olive drab common to Air Force planes through most of World War II. First sight of the most different airplane I had ever seen, left me with a hankering to fly it that never stopped. I thought I would get my chance later in the Air Force, but it was not to be. Although I spent thirty years flying almost all of the other Air Force fighters, I never did get up in Lockheed's famous twin.

As the World War II fighters went out in favor of jets, it hit me that if I was ever going to fly a P-38, I would have to build my own. I had been a model builder before flying for the Air Force, and I don’t think this activity ever really took second place. However, as you might guess, the idea for the P-38 model was around for a long time before anything happened. A P-38 was just not a project you jumped into back in the reed days. Later, when the right radios came along, there just weren't many designs or kits.

Even today, to my knowledge, there is only one RC kit for a P-38 on the market, the Lockheed P-38 Lightning (oz1095) from Royal. I have seen several models from this kit fly, and some fly very well. However, it also seems that when this size model is equipped with retracts and all scale details, it becomes a real bomb. A full blown P-38 model with the wing area of the kit size has the same scale speed relation to a P-38, as a Formula I model has to a Goodyear racer. And single engine operation with a heavy model of this type is something you would rather not think about.

The problem begins with the highly tapered wing chosen by Lockheed. Great on the full size fighter; not an ideal shape for a model - particularly without the huge Fowler flaps Lockheed shoved out behind the wing to slow the ship down to a reasonable landing speed (More on this later). That taper really cuts the wing area. For example, the P-38, the P-82 Twin Mustang and the Grumman F7F Tiger cat were all within inches of the same wingspan. However, the P-82 had 25% more wing area than the P-38, and the F7F had almost 40% more.

There is one sure way to beat the problem of a lot of aircraft structure and a small wing. Build it big and keep it light. The first is easy - the second is not. Any model with twin .40's and retracts will have about 3-1/2 pounds of hardware that you just cannot sand down to remove weight. With .60's, this runs about five pounds. I chose .60's for the P-38, and a scale of 1.8 inches-to- the-foot, as about the maximum practicable size. Anything larger, and you wind up making your own prop spinners - or your wife may leave you when you buy a truck big enough to haul it. At 1.8 inches-to- the-foot, the span comes out to just under eight feet. Shooting for a design estimate of 12.5 pounds, the model actually weighed in at just under thirteen BDT (before drop tanks), ready for the first flight. The drop tanks were added after the first dozen-plus flights, when it turned out that even at thirteen pounds the model was easy to handle.

Flaps would be nice on this model, but the P-38 had four-section Fowlers that moved back behind the wing the full width of the flap as they angled down. My engineering talent was not equal to development of a track system for flaps that would stand up to the full blast of a couple of .60’s on a go-around. If any reader comes up with such a system, I would sure like to know about it. The rear wing spar is positioned so that flaps can be added to the model if anyone wants to go all-out.

The 'L' version of the P-38 was selected for reproduction for a number of reasons, it was the last and best of the P-38 production models, and was flown in combat by many top aces, including Major Richard Bong, the highest scoring US fighter pilot of all time. It was produced mostly in natural aluminum finish and had the deep cowl which, in the 1.8 inch scale, completely hides any of the .60 size engines. There are also a number of good three-views available for the L version..." 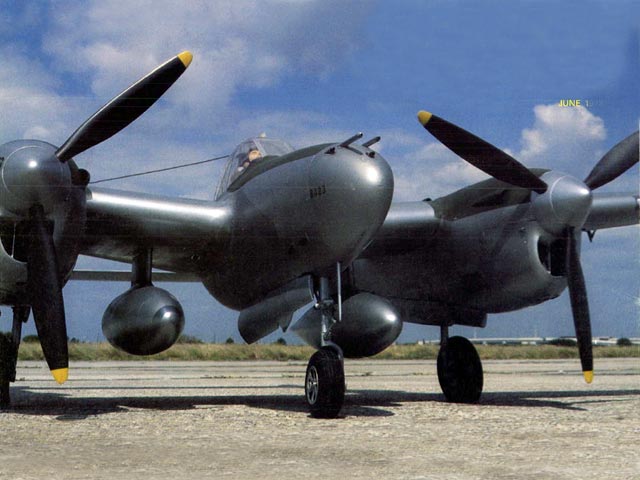 Is Missing Plan Sheet #3 that has the right wing panel and the Turbo Charger Detail. Uncle Willis may still have a complete Plan Set. I hope you can get it.
PM - 11/09/2014
Not sure. In the MB article these 2 sheets are labelled 1 of 2, and 2 of 2. Looks like this here is all there is.
SteveWMD - 11/09/2014
Flip the plan in Photoshop and print it off, or use the old castor oil trick.(Build the left wing, remove from the plan, then wipe the reverse side of the plan with castor oil. The paper will become completely translucent, so you can build the right wing using the reverse side). Regards,
SBurling - 11/09/2014
Add a comment