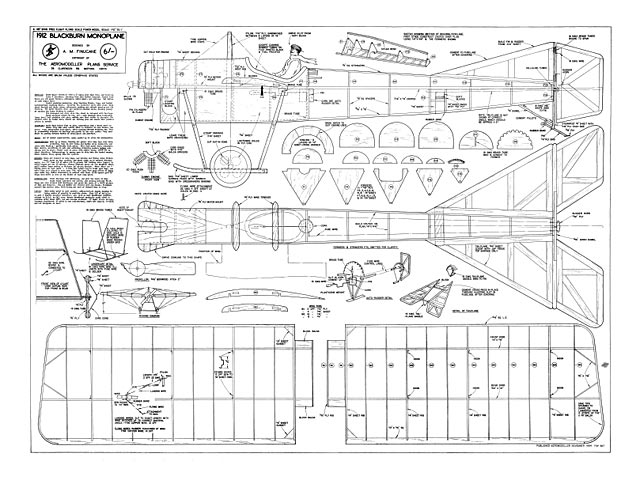 Quote: "IN THE December 1951, Aeromodeller George Cull described the 1912 Blackburn Monoplane and captioned: will surely make the flying scale modellers reach for their drawing boards. I did! Eighteen months of development have produced this exact scalebmodel - not for the piano top - but for safe scale type flight. Thanks to the low wing loading, auto rudder, generous tail area and the 1947 Amco .87 up front, this has been achieved.

Dihedral, airfoil sections, wing and tail areas are scale. In the interest of flyability a number of rigging wires have been omitted and a peculiar tail trimming device incorporated. Although rather unconventional, this latter arrangement works perfectly and is very robust.

The prop diameter is slightly below scale size. With an eleven inch scale prop the little Amco would only run when the needle valve and compression screw were removed! The model is always ROG'd and never pushed. Hard-bitten power duration men stand and gape when, with the Amco gently misfiring, auto rudder wagging and the intrepid aviator's scarf blowing in the slip stream, the Blackburn rolls forward. A 35-40 ft take-off run is followed by a gentle right hand climb to a 30 ft ceiling. For an unknown reason, probably connected with auto-ruddery and pendulum inertia, the normal wide circle flight pattern is sometimes enlivened with a figure of eight. The tank has a 12 minutes flight capacity - so old 'hat-on-backwards' has got some hours in.

Low air-speed, about 7 mph flat out, and light weight reduce the chance of serious damage. It is, however, essentially a calm weather job - as also is the prototype which cavorts regularly at the aeronautical garden party. And there's a point there, for if your club is one of those publicity minded co-operative groups that are constantly asked for demonstrations at local affairs, the Blackburn is a certain crowd-puller.

Full building instructions are included on every copy of the full-size APS plan; but to whet the appetite, the rather novel trimming system makes interesting reading.

The model is best trimmed under power on a calm evening. Add ballast inside the cowling to bring centre of gravity to position indicated on plan. Pack leading edge of tail to give approximately 3 degrees positive incidence. With as much down-thrust as possible, attempt an ROG on full revs. Walk beside the model. It will probably rumble forward tail up and remain on the ground. Remove downthrust in very small doses until the model comes unstuck after 30 feet and stays airborne. If it climbs steeply, lay it by the heels and put on more downthrust. Don't worry about turn. The rudder takes care of that. No other trimming for glide was required on the original; but if necessary the centre of gravity can be moved slightly and the tail set at zero."

Update 26/09/2018: Replaced this plan with a clearer copy thanks to DBHL, theshadow. 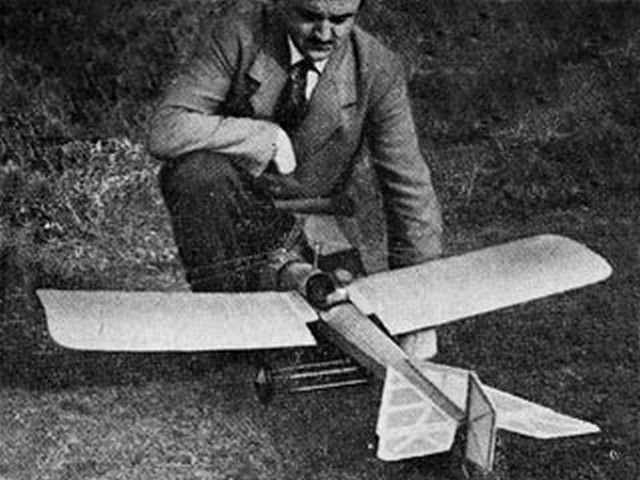 I have been working on a cad version of the 1912 Blackburn for about 4 weeks now. There is something wrong with the plan view. The upper aft formers are all wrong but the 2 ends and they all mach the aft longerons in width. All of the bottom formers forward do not match the longerons in width by as much as a quarter inch. 3D cad is showing these mismatches.
rchopper56 - 12/03/2018
Only former F8 is notched. Stringers lie on top of the rest. Could that be the answer?
Karsten - 23/04/2018
In order to have a clean appearance of tissue covered fuselage and avoid shrinkles at the cross point of stringer and notched formers. So only the first is notched to give the correct starting position. In fuselage with all notched formers you have to sand a scallop between the notches after stringers are glued to make the cross point invisible.
Pit - 23/04/2018
Add a comment