Take your choice, two .19 size powerplants or four .09's; but either way you'll have the most publicized model in your town!

Being a Lockheed employee I was naturally quite close to this particular aircraft; the more I saw of the Hercules C-130 the more convinced I was that I wanted it to be my first multi-engine project. Its gargantuan proportions impressed me. But it went deeper than that, for incorporated into the design were many features which justified its being called the 'freighter of the future.' One of its unusual features is the low-slung fuselage incorporating a floor that is the same height as truck beds. Up-swept tail arrangement is utilized to accommodate rear-end loading.

Flight tests have indicated that the speed of Hercules will surpass that of our present luxury airliners; the C-130 can land on an 800 ft runway. Considering that fully loaded the Hercules weighs in at about 54 tons (of which about 20 tons are cargo) and it has a 132 ft wingspan, 'impressive' is the right word.

There's a total of 15,000 horsepower behind the 4 turboprops. Unusual is the use of deeper camber for the bottom of the stabilizer than for the top. Maybe the engineers who thought up this feature were old Pacer (oz8073) addicts. (Model bugs new to the hobby may not have heard about Sal Taibi's free-flight Pacer design which incorporated an inverted stab and was one of the hottest designs of the early '40's. It's still a strong favorite with many old-timers and it still brings home the bacon at contests.)

But getting back to 'Hercules' and control-line models in general: Nothing can hold a candle to a multi-engine model, particularly if it is a scale replica.

Certainly you can't build this multi-engine model overnight or even over a weekend. What we prefer is the kind of project that can really be called model building. Ask anybody who has tried multi-engine designs, when it comes to flying there's nothing that can challenge the roar of two or more engines in synchronization; or that breathtaking moment when the model is released and it accelerates for a take-off.

If this is your first multi-engine design we suggest you install two engines operating on the inboard nacelles; leave the engines off on the outboard nacelles. Two K&B .19's proved more than ample power for us and the model even performed on one!

We have gained sufficient confidence to convert over to four .09's and performance has been to everyone's satisfaction. What has improved still more is our ground operations prior to each flight. We've gotten so we look like centipedes-on-the-double. If you're an old hand at multi-engines, you might decide on the four .09's to begin with.

Construction: With this project it is advisable to begin construction with the wings and tail surfaces, for then things will be easier in the final assembly. The wing, stab and fin ribs are cut from hard sheet balsa. In all probability most of the wood lengths you'll be using for the wing loading edge and spar will be 3 feet, and so will require splicing. Wing spar can be spliced in the center since plywood stiffeners are used..."

Quote: "Hi Steve - Here is Hobby Helpers plan 656. This is a full size plan scan, with wing joined and cleaned up. I don't have the associated American Modeler magazine issue 06-56 to fill in the designer details. Perhaps someone can provide the article text." 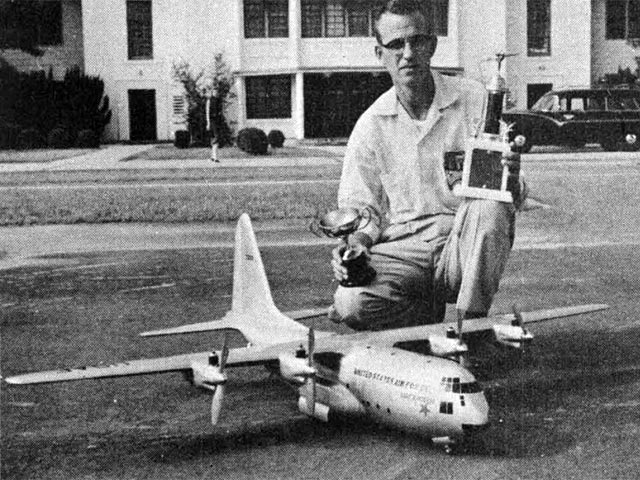 Could the Hercules be converted to RC? Regards,
Daniel Burke - 23/06/2019
Sure. It looks like a heavy design though, like most old CL plans.
SteveWMD - 24/06/2019
Same size as Avios C-130, one could use some spares from Hobbyking, like nacelles, motors and props. Need some diet though, those leading edges must be narrower and skin thickness reduced.
José Costa - 25/06/2019
Add a comment