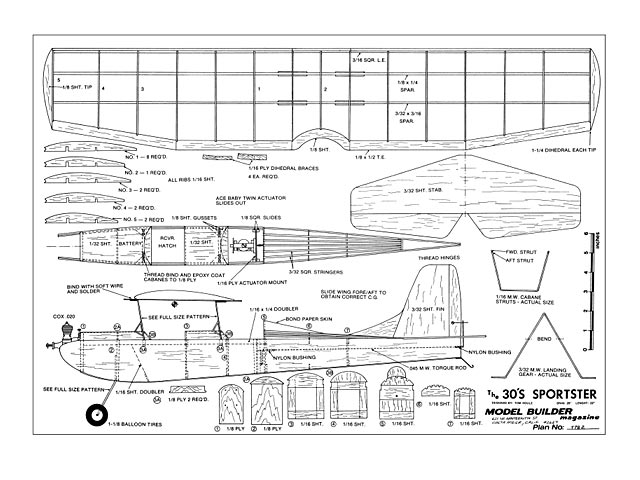 For relaxed R/C fun, nothing can beat a small, rudder-only, glow-powered parasol. Just be sure that the tempting small field near your home is a safe distance from the regular R/C airport!

The 30's Sportster had its beginning in my collection of AERO ERA plans, as a 14 inch span stick-and-tissue rubber powered design. The darn thing flew so well that I began to consider enlarging it for Ace pulse flying. Two years later (these things take time) I did enlarge the plans to 28 inch span. The nose arm was shortened and the fin was reworked slightly, but other than that, it is the same configuration as its rubber powered little brother.

Mine literally flew off the board, the only adjustments required were to add just a bit of nose weight and unwarp a wing panel that had taken a set due to overzealous doping and shrinking. Incidently, the Sportster will do very nicely as a free flight. Just don't get carried away and install a brand new TD .020. She'll do quite well with an anemic .020.

I started with the fin and stabilizer because those are the two items I least like to make, Cut the stabilizer and fixed elevators from medium 3/32 sheet and butt glue together on a flat surface. Do likewise with the 2-piece fin. Cut out the rudder and hinge with Robart or thread hinges, ensuring that the fin can freely flap back and forth on its own weight. The fin must be free. Magnetic actuators typically have low output torque.

Set these aside and start the fuselage by cutting out and assembling all bulkheads. While these are dry-ing, you can cut out the sides from medium 1/16 sheet and install the 1/16 nose doublers - one right and one left. 1 personally like to run the doubler grain vertically, at 90° to the side grain, but take your choice here. You should also glue in the 1/16 x 1/4 upper side reinforcement strips at this time, butting them to the doublers.

The 1/8 ply firewall with blind 2-56 nuts can be installed next, again using plenty of epoxy. In fact, I make it a habit to coat both sides of the firewall to prevent fuel soaking into the plywood. Install the firewall with 0° and downthrust, unless you must install a super-hot engine. In which case, add a couple of degrees of down and right thrust..." 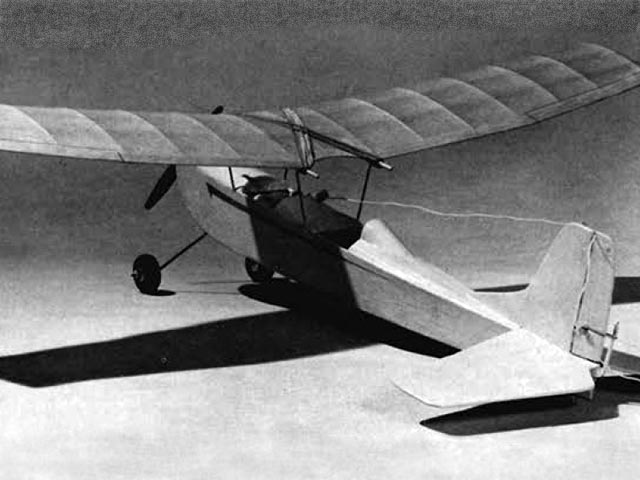