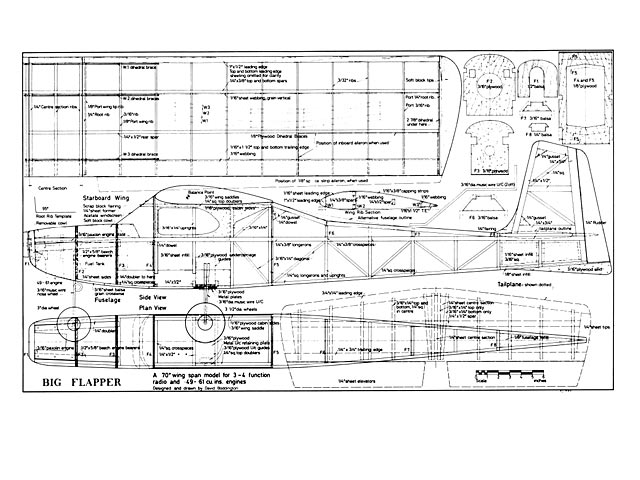 Quote: "This airplane won't do the AMA or FAI pattern, it won't take retracts, it isn't fast, and it is not quick to build. But, here is the plane for the quiet Sunday flying craftsman who wants a big relaxing model for three or four channels.

The Big Flapper, as its name suggests, was developed from a smaller model called the Flapper - a 48in span single-channel model that featured a novel form of aileron control. It was before the days of motorized servos and I mounted the rubber-driven escapement in the center section of the wing with the rubber motor running down the span of the port wing. The winding hook was let into the tip of the wing. Surprisingly, this method of operating the narrow strip ailerons worked very well.

With the advent of multi-control or, more truthfully, when I could foresee the possibility of purchasing this type of equipment, I set about designing and building a large version of the Flapper for training purposes. The building went on fine until another project interrupted the progress. I never seemed to get around to completing the model and eventually let a friend, Bob 'Flacky' Brightwell, have it.

Bob is a perfectionist and he not only made a superb job of finishing the model, making me wish I had kept it, but also proceeded to make his own engine and radio gear for it. He incorporated a number of his own modifications, described in my notes on construction, as well. Because of these alternatives, please read the instructions carefully, study the drawings and then decide exactly how you wish to build the model.

Construction. The fuselage used is the old-fashioned "box" type using sheet sides at the front with the rear end built-up from strip. The engine can be mounted either inverted or, if your motor does not start happily in this position, upright. Should the latter mounting be chosen, drop the engine bearers 3/16" to keep the propeller line correct..." 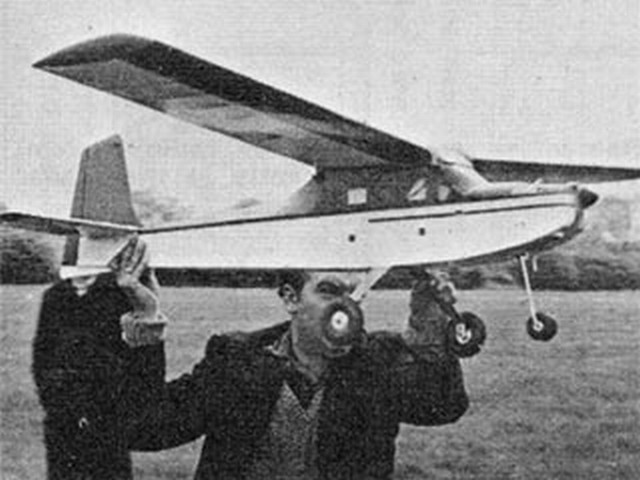