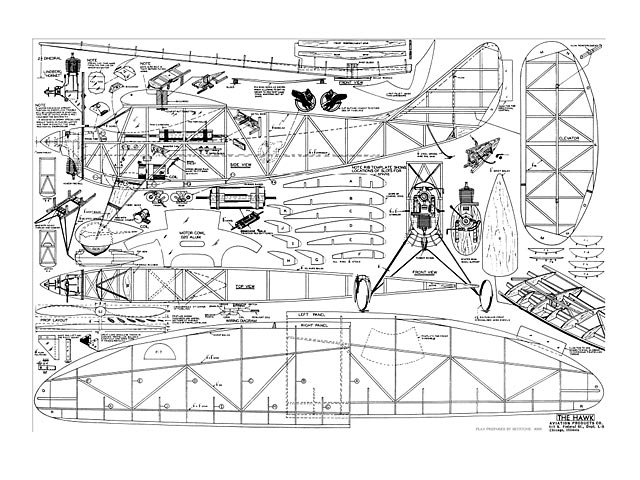 Quote: "The exceedingly clean lines and the accurate disribution of the surfaces of this model make it both an efficient and stable gas-powered model that easily constructed. Note the neat distribution of the power-plant.
Hawk, by Paul Lindberg.

This tiny gas model has turned in many an interesting flight powered with the famous little 'Hornet' motor. Being of such small size it is very conveniently carried around. A very clever and helpful idea has been built into the wing so as to prevent any damage to the ship if it should strike some unseen object. Should the wing tip strike the ground first, it will pivot at the center of the wing which in turn is held to the body by a long bolt.

The full shock absorbing landing gear is very simple to construct as well as being adequately strong to stand the severest landings. The model as a whole has been designed so that a beginner may construct it with few difficulties. At the same time the beauty plus graceful lines together with its excellent performance were very important factors considered while building the model. Suggested color scheme for this mode] is yellow trimmed in red.

Note: If the motor is to be installed in the model in an inverted position, more difficulty will be encountered. It is very important that the gas tank and motor are installed exactly as shown on plan in order to secure the maximum results. It is also very important that you do not choke the motor so as to get gas down into the cylinder which in turn shorts the points in the spark plug. We advise mounting the motor on a test block. Experiment with it in this position so as to familiarize yourself with the starting, When mounting your motor in an upright position, such great care need not be taken.

Construction of Fuselage. The main longerons of the fuselage are of strong 1/8 inch square balsa. Place wax paper over the plan to prevent the fuselage sides from sticking to the drawing. After the two fuselage sides have been constructed, cross members are next cemented in place. The tail pieces of the fuselage is comprised of a solid piece of balsa. Fire wail is made from 3/16 inch thick veneer.

All formers are cut from 1/16 inch thick sheet balsa and are cemented in their proper locations. 1/16 x 1/8 inch stringers are attached and spaced evenly about the formers as shown in the front and side view of the plan. Photo of the framework clearly shows all extra bracings, etc, built into the fuselage..." 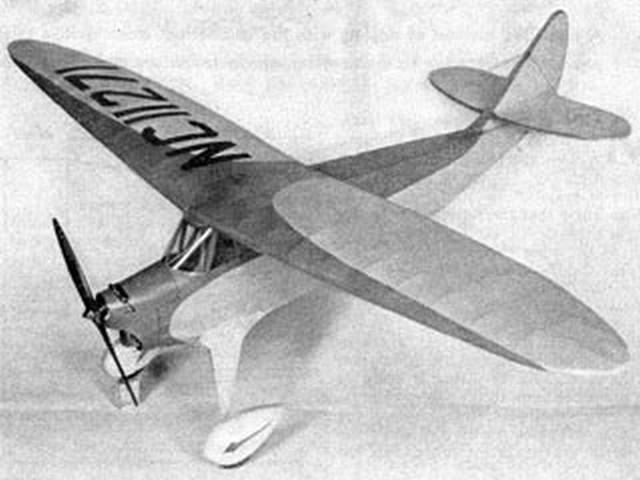 My Hawk was built per the plan with an upright Lindberg Hornet engine up front. For free flight I think it needs more dihedral for stability. The tailplane is of thin section and needs to built carefully from very stiff wood to avoid warpage.
David Hill - 14/12/2020
Add a comment