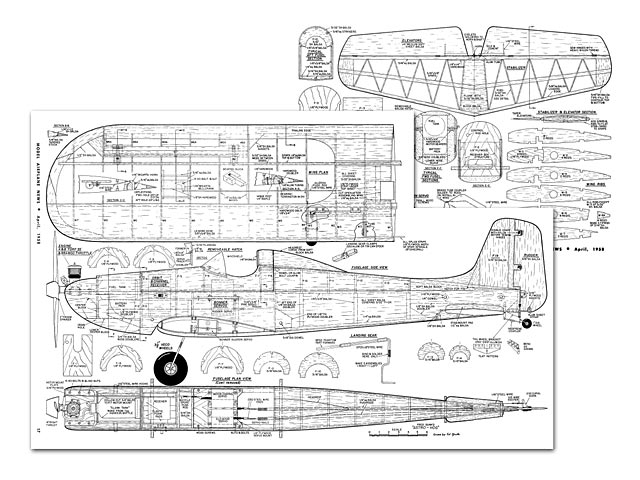 This is the Fred Dunn Astro Hog plan as originally printed in MAN. From Model Airplane News issue 04-58, courtesy of theshadow.

Quote: "Ailerons and the low wing - out of this world manuverability - an airplane to top anything so far in multi RC.

A low winger for radio-control? What's the deal? Well, give a listen fellows for some interesting clues from one of the most gratifying RC projects this modeler has ever had the pleasure of exploiting.

First off, I do not wish to discredit the faithful high-wingers which have been the RC pioneers. They will continue to provide the basic foundation upon which we build a wealth of knowledge and experience. I am happy, however, to see the low-winger appear on the scene and assume a rightful position among our top radio-controlled winning models.

In my opinion, one of the most inspiring developments that sparks the imagination of a designer, was the introduction of multi-channel radio equipment and the recently new adaptations featuring simultaneous control. In addition, we now have electro-mechanical servo devices which have achieved a new high in outstanding performance and dependability. To top it off, we are now able to obtain some new and unique glow-engines, which have been developed especially for RC.

Throttles are now becoming standard equipment on some of these engines and have been designed to provide us with a complete range of power settings. We no longer need consume our flying time fighting acute problems with this equipment, but can get right to work designing, building, and flying models capable of getting the most out of it. The Astro does just that.

My first attempt at flying a low-winger was made in the Spring of last year. The design was a combination of PT-19 and P-51. Ailerons were omitted, since I felt that any good design should be able to fly through normal attitudes without them, and I planned to add them later. This was a mistake! Eight attempts, eight landings, all of them fatal. All interested persons watching the flights, bowed their heads and slowly walked away, reaffirmed in their convictions that the low-wingers were doomed and would never be suitable for use in R/C. Reports from other sectors indicated much the same results with the exception of some favorable comments regarding Hollinger's Fairchild PT-19 (oz327). Not easily discouraged, I sat down and gave it some concentrated thought.

Since I was unable to attend the '57 Nats, I decided to make good use of the time while the gang was out in Philadelphia, cutting capers in the Eastern skies. I told them I would have something interesting when they returned and went to work burning the midnight oil.

Actually, I decided, my first design had been so scientific it wasn't worth a hoot in a windstorm. This new ship must be more fundamental and should incorporate some of the good features found in existing designs. I followed some themes of the world renowned Smog-Hog, and decided to stick with the good ole NACA 2415 Airfoil. Ailerons were a must this time - my first ship might have been saved had I been able to control roll. Soon, I discovered I was creating a low-wing version of the Smog-Hog, with a few exceptions, of course.

The Astro made its first contest appearance in Sept '57 at Turlock, Calif, and walked off with 1st place in Multi-Advanced after Dunham rang up 239.6 points. Since then, the Astro has enjoyed victory at every major meet attended, the latest (at the time of writing) being the contest in Albuquerque, New mexico, where Dunham demonstrated the ship's ability to win out even in high-elevation country.

I have been swamped with requests for data and design specs, I'll never know how the word spread so fast, but now I fully realise how eager many others have been to see a new look in RC model aircraft design. Let's take a peek at some of the interesting features of the low-winger as revealed by the Astro-Hog.

Our Astros, thus far, have been equipped exclusively with multi-channel radio gear. No regard has been given to other control systems..."

Update 19/11/2016: Added alternate version of the same plan, thanks to Bernd57. This Uncle Willie drawing shows the complete wing layout. 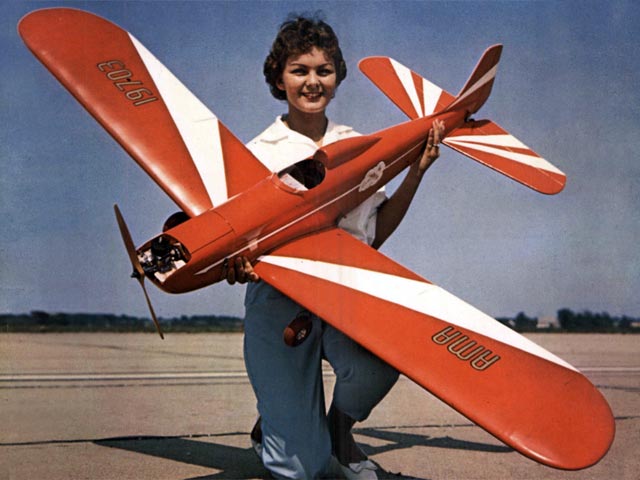 Hi Steve, I am attaching my Astro Hog built from the SIG kit in 1962 [pic 006]. This was the first RC plane I built after graduating from college, getting married and joining IBM Corp. in 1959 My new wife bought me the Orbit 8 channel reed system for a wedding present. I used Bonner servos and the latest and greatest VO500 nickle cadmium batteries. The plane was originally powered by a K&B .35 but was converted to K&B .45 when it was released. Covering is red silk with clear dope.
Bob Noll - 11/02/2021
Add a comment