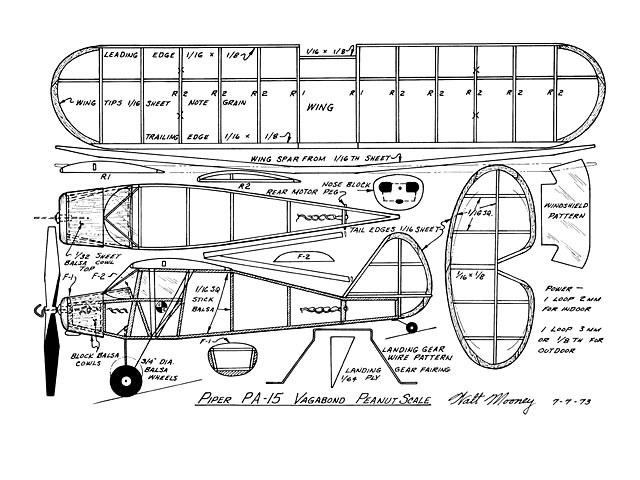 Quote: "By Walt Mooney. Our Peanut of the Month is a special favorite of the designer - he owned a full scale version for a period of time. Be sure also to note Walt's dissertation on scale scoring, it's a good one!

The Vagabond was manufactured by Piper in the late 1940's and was an attempt to produce an extremely economical two place side-by-side airplane. It had as few frills as possible. For instance, there were no shock absorbers on its rigid landing gear, there were no stringers on its square steel tube fuselage, there was a single door on the right side, and there was a single set of controls for the pilot only.

The little airplane was a delight to fly - it was faster than a Cub on the same power, and with the smaller wing, was less affected by gusts and cross winds on the ground. I owned one, and loved the little bird. It flew stably and landed easily. It would cruise at 87 mph while burning only three-and-a-half gallons an hour. I've regretted selling it since the day it flew out of my sight.

So, the model you see is of N4314H, a red and white and black exercise in
aeronostalgia. The low aspect ratio wing makes the model a good one for the small Peanut Scale, and the one photo-graphed is capable of 30 second flights indoors and whatever the god of the thermals dishes up outside.

Wood sizes are all such that a be-ginner can handle them without too much trouble. An experienced builder can decrease the sizes or thicknesses of the wood and build a lot lighter model that would be capable of much longer flight times.

The construction of the model follows the most usual practice so a construction article is not necessary. Certain points should be mentioned as follows:

The fuselage has a square cross sec-tion except at the very front end where it is narrower at the bottom than the top. Unless you build a very light model, the forward cowling can be made of block balsa cemented to the structure and carved to cross section, thus elimin-ating formers and the necessity of wrap-cowl. The model shown needed some nose weight to balance it, so a little more weight and strength won't hurt.

All the wing ribs are built up as rib R2, except the two ribs, R1, at the cen-ter. The spar is cut out and the two center ribs are slipped over it. Then build one wing half at a time over the plans, using one sixteenth square for the bottom of the R2 ribs and slicing the tops around a pattern from sheet. Cement the landing gear fairings to the fuselage but not to the wire. With the wire free to flex the wheels can take an impact without putting the load into the fairings and fuselage structure..." 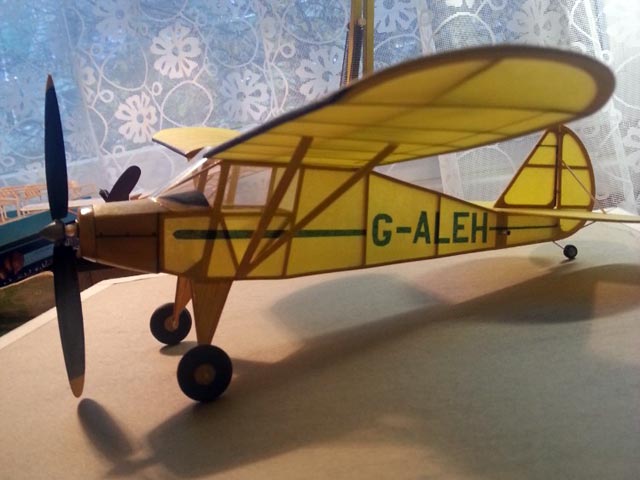 Hi Steve and Mary, I'm sending photos of a Piper PA15 Vagabound peanut built according to Walt Mooney's plan, downloaded from the Outerzone [main pic, 005,006]. Thank you for your work in the Outerzone.
Lada - 22/11/2020
Add a comment